2018 was the fall of a colossus. It was the collapse of the South Korean juggernaut that had won most international events for four years straight. Gen G was really where the collapse began. They were the first team to be eliminated from Groups and a sign of the LCK’s decline. In their place rose the new LPL era we see today.

What’s really curious is that the same Gen G squad was the crown resting on the Korean Collosus’s temples just the year before. In 2017, they won Worlds while only dropping three games across the tournament. This was despite drawing into an incredibly strong Longzhu gaming right away. It was a performance that rivalled some of the most dominant Worlds teams in history, like SKT in Season 3 or Samsung White in 2014.

As a competitor, CoreJJ has reached the highest peaks in his sport - and he’s fallen the furthest too. Across a career of disappointments and rebounds, CoreJJ has forged a very unique mentality. He doesn’t shy away from failure. On the contrary, he seeks it out in order to become deeply skilled.

This is the crux of CoreJJ’s career: The death of pride is the birth of skill

This mantra also creates the fundamental psychological rhythm of sports and explains why it’s so hard to stay on top.

It’s pretty simple. The normal competitive cycle goes that a team or player wins a lot, becomes accustomed to winning, stops practicing as much, stops examining their flaws, begins losing, resumes heavy practice, and focuses on patching their flaws. It’s a rhythm that Core admits he’s fallen into.

That approach is only natural and, when done right, healthy. The body and mind need time to regenerate and if you create a reward for your efforts, that reward can turn into motivation. It’s the way most players approach things and also why hyper-dominant athletes like Faker, Jordan, SonicFox, and Kobe Bryant are so impressive. They never become fully accustomed to winning.

Kobe’s trademark mamba mentality is the best example of this. He had a ruthless and unwavering dedication to the game in all moments of the year, no matter his position in the League. Kobe showed up to practice before anyone else and left after anyone else. The result was potentially basketball’s best offensive player ever - a superstar who put up 80 points in an era where the 60 point game was mythic.

Good as the mamba mentality is, most players - and people - can’t sustain the level of unyielding effort Kobe put in. Most people will get overconfident, will burn out, and will lower their guard, resulting in some of the upsets you see in League - like IG’s loss to us or G2’s loss to RNG.

Maybe even our loss to TSM. Winning has a way of covering up flaws.

“Even something as simple as failing and then doing something exceptional later in the game can make you forget about where you failed in the first place. But when you lose you more critically look at the spots where you failed,” Jatt told me in our interview. “[losing] does make everyone a little more receptive to change.”

For CoreJJ, the loss to TSM was a moment of overconfidence and a moment of learning. He’d come in off of a hot split and a lot of wins that he engineered - like the win over Cloud9 he secured with a single god-hand hook. The stellar performances earned him an MVP award. 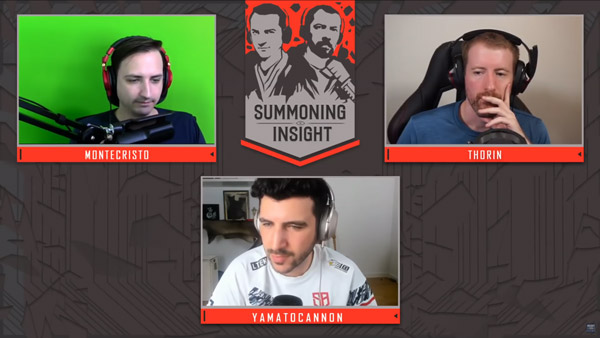 Against TSM, he didn’t show the level of playmaking that won him the MVP award. Analyst and coach YamatoCannon went so far as to say that “their bot lane is their eyes and their eyes were closed.” YamatoCannon wouldn’t be nearly as harsh as Core himself.

“I didn’t do anything,” he said. “In the playoff series I was more inconsistent. I didn’t have strong decision making. [...] So after the game what I’m mostly focusing on is like, what is my role in our team. What should I do? How do I play?”

Core would so completely turn his focus towards improvement that he’d nearly forget his biggest source of pride. “Actually, I almost forgot I got the MVP [award] because we didn’t win the LCS,” Core says, almost laughing. “I’m still glad that I got it.”

With his medals mostly buried in the back of his mind, he came into the Worlds bootcamp with both the goal of finding his role on the team and honing his individual play.

This is in part why CoreJJ played so much super server solo queue with Tactical, getting to challenger very quickly. “It was really good practice in terms of teamfighting,” he noted. “Super server is more spicy and there is a lot more random fights.”

“Right now, I’m playing on Korean solo queue,” Core added. He switched servers in order to find tougher opponents and an even better practice environment. “I just wanted to play [on the] more balanced server. I know many pro players in China, in Korea, play on the Korean server. Whenever I play with Tactical in [the] super server, it doesn’t feel super amazing in terms of bot lane.”

Jensen said the same of the super server in our interview for Monster. “There’s literally too much fighting. It helps you individually a lot, as long as you don’t forget the macro part of the game. These games will make you forget it!”

CoreJJ’s practice panned out immediately in play-ins, where he’d returned to his MVP form. His Rakan engages were decisive and crucial in organizing the team during a fight. Similarly, he and Tactical made huge strides in lane and in map pressure - going from getting killed in lane against TSM to flashing forward and carrying fights in play-ins. 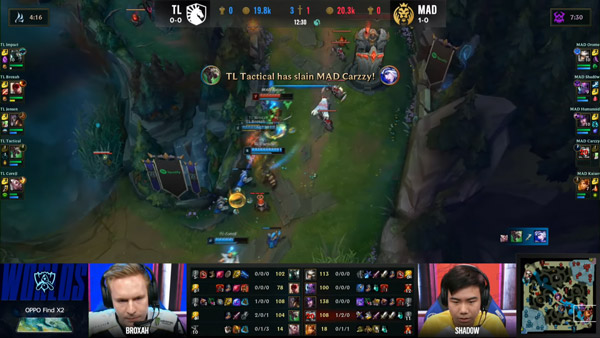 That success started with the failures that came in the LCS playoffs “It was a good time to learn,” CoreJJ said of the team’s losses in playoffs, “[to] start to build up our style, our game again. It helped [shape] how we’re gonna play.”

This is the natural cadence of competition - win and get complacent, lose and improve. It’s a cadence that CoreJJ knows very well, qualifying for Worlds through the Korean gauntlet three separate times. (Fun fact: Gen G qualified through gauntlet again this year after they lost against DRX partially due to an hours long pause.) 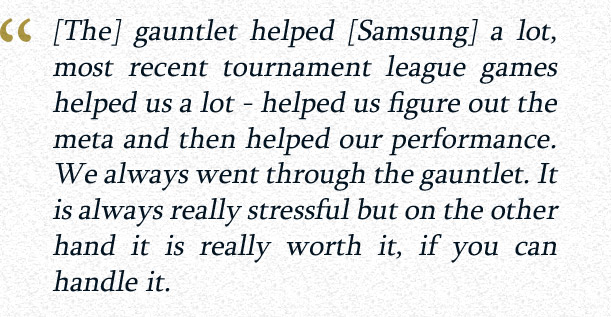 The easy (and weird) solution seems to be losing in order to win, exploiting the low points of the cadence to hit the high point at the right time. The problem is, most competitors lose themselves to this cadence. If they lose too frequently and don’t adapt quickly enough, they miss their shot entirely - as seen with both Cloud9 and MAD Lions.

On the flip side, a huge windfall of wins can create a sense of pride, and the pride stymies growth, allowing other teams to study tape and catch up. This has happened a lot in the lead up to Worlds. In 2012 with Azubu Frost. In 2014 with Samsung Blue. And in 2017 when CoreJJ and Samsung beat Longzhu and SKT.

This is why, listening to CoreJJ speak, you can hear him make a conscious effort to kill his pride.

“When we are playing a game, there might be some plays my bot laner does that I didn’t even think of.” This quote comes from an interview with Ashley Kang. “And when these plays happen, I tell myself, “Yeah, this is exactly why I stopped being a bot laner.”

“Every Worlds team was good in their region. It doesn’t mean you’re good in Worlds,” he says now, in this interview.

Core doesn’t kill his pride in order to create a false modesty. He’s not dragging himself or teammates as a way to look humble. When it comes time to play, his confidence is unshakeable.

Like most Worlds-caliber players, CoreJJ sees an unbeatable apex sitting in wait inside him. He rids off himself that pride as a way to push past the seesawing cadence of victory and loss that so many players get swept up in. He kills the pride to try and bring his team to that point no analyst and few fans believe they can reach.

“I believe Worlds is meaningless unless you win it all,” he tells Ashley Kang after play-ins. “I want to keep grinding until I win Worlds. And that’s what I want to show the fans.” 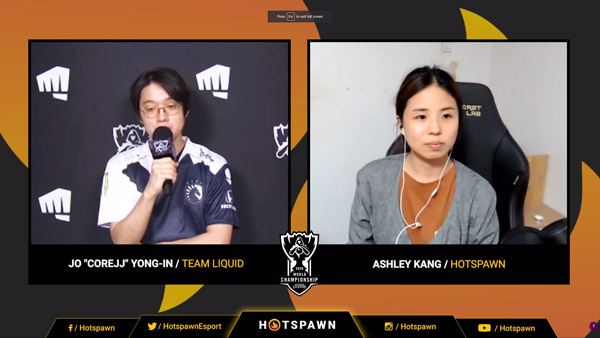 Please log in with your teamliquid.net account to post a comment.
CS:GO   From 16-1 to 6-16: Love and Heartbreak in CS:GO In Counter Strike, if a team loses a map with less than 6 round wins, it’s a beatdown. It’s such a beatdown that we normally see it in an outclass scenario—a tier 1 team against some upstart. When it happens between two tier 1 teams, it’s often not an outclass and more a perfect storm.
League of Legends   Leading from the Isolated Lane In the average TL game, Alphari leads his lane opponent by 493 gold and 12.5 CS by 10 minutes. If you don’t know the numbers of League, this may not seem like much.
Street Fighter 4   FGC: This is Good Bye for Now... With a heavy heart, it’s time to announce that Team Liquid will be exiting the fighting game community. This means Team Liquid will no longer be competing in Street Fighter V or Tekken 7.
Valorant   Professor Sliggy and the Class It’s hard to believe but it’s nearing a year since Valorant was released—just past when the game was announced as the mysterious “Project A.”