Chatting: Can the Community Outsmart the TFT Meta?


If you’re like me, Teamfight Tactics is fun because of the variety. There are always new units to 3-star, traits to fall in love with, and comps to complain about. Sure, it feels rewarding to climb and collect LP but the freshness of TFT is what keeps us coming back for more.

That sense of freshness is amplified after one set is retired and a new one is ushered in. Everyone’s trying to figure out what’s OP and what needs some TLC from the TFT devs. In patch 12.23b, Jax and everyone’s least favorite feline were flavors of the month. After their nerfs, a buffed Sett sauntered onto our boards and punched our units in the guts.

Sure, you could queue up and win with whatever Jax, or Sett, or Garbage Cat look-alike comes out swinging in Set 8. Or, you could win with a little less meta and a little more flair. In an attempt to counteract the meta and not become another cog in the TFT machine, we went into a few Team Liquid content creator Discords and asked their communities for off-meta comp suggestions.

To ensure the comps were fresh and not overly contested, I picked ones I generally hadn’t seen in my ranked games. As a note on my background, I started playing TFT more seriously in Set 4.5. I was a dirty 20/20 player who forced Sharpshooter Spirit every game and climbed to Platinum. I peaked D1 in 5.5, Master in 6.5, took a break during Set 7, and recently hit Master again.

I played five games each in ranked/normals to get a feel for every comp and see which one would perform the best. My ranked MMR is high Diamond/Master and my normal MMR is around Platinum/Diamond. I would have played more, but there was a limited time frame to complete the games and type up my thoughts.

[Editor’s Note: We had to get something out before Mortdog patched our ideas into oblivion or they’re “actually just meta.”]

Without further ado, let’s find out if the TL community has found a way around the Fast 8 Sett meta.

Suggested by Clavee in Robin’s Discord

Note: Played before the 3 Prankster bug fix on 1/17

Soraka carry with Pranksters was my favorite comp out of the suggestions—and the only comp to get me all top 4 finishes. I enjoyed it so much I even played a few more games in ranked after I was done. Originally, Clavee suggested running Soraka, Zoe 3, or Leblanc 3 carry. I never hit enough natural copies to try the reroll versions.

The Heart trait gives your team stacking AP when your Heart units cast their Ability. As Twitch chat says, let them cook! The Prankster mechanic buys your Heart units the time they need to ramp up. It’s also fun watching your opponents desperately try to kill the Pranksters + dummies that pop out when they get low on health. Throw in a Zzrot and a Zac if you’re feeling spicy and it’s an annoying comp to deal with. 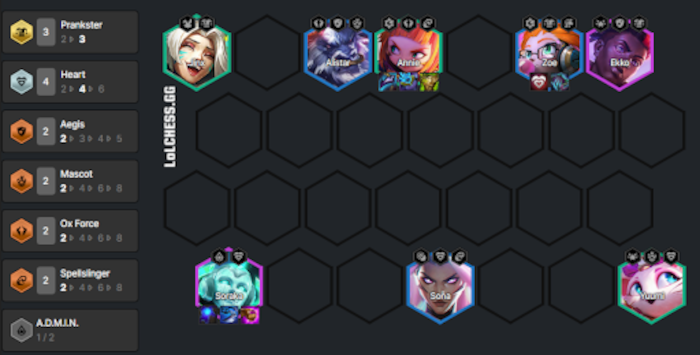 In general, I used Annie as my tank since you can pick her up early and slam items like Spark, Bramble, Gargoyle, Sunfire, Dragon’s Claw, or Warmog’s. Zac, Rammus, and Ekko can also work as tanks. Ideally, Soraka gets Blue Buff (this is her most important item but you can build Shojin too in a pinch), Jeweled Gauntlet, and Rabadons or Giantslayer. If you’re lucky enough to get a Heart emblem it can go on Zoe.

This comp is perfect for players who want a largely uncontested AP comp. But be forewarned, you’ll run into problems against Dragon’s Claw Sett. Hopefully, when he’s nerfed again next patch (pls Mortdog), you’ll have a much easier time beating up Sett with Heart carry.

Note: Played before the 3 Prankster bug fix on 1/17

I’d originally planned to play all 15 games in ranked, but then I got two 7s straight out of the gate playing Jinx reroll. I queued up for normals instead for the sake of my mental. On a positive note, it forced me to try other Jinx variations, including the Nasus “Soul Eater” augment and a duel carry comp with Vayne.

It was likely a combination of going against lower elo players and the duel carry that got me a 2nd and 3rd. The biggest problem I ran into was not doing enough damage early with solo Jinx carry (even with her hero augment). I sacked a lot of HP and even after I hit Jinx 3 I was still coin flipping some matchups. Adding in the Vayne saved me some much-needed HP in the early and mid-game. 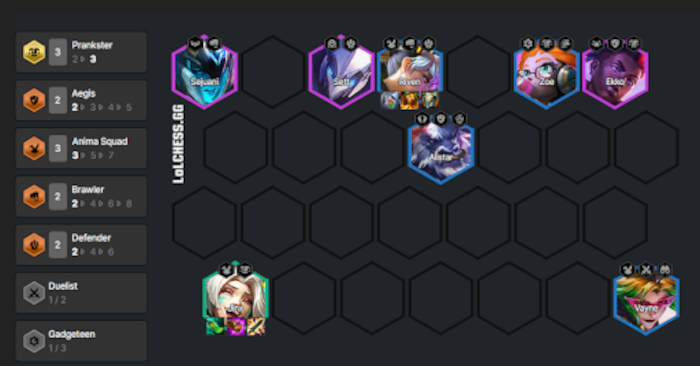 This comp feels like it could be OP with a buff to Jinx or her hero augments, but for now, I’d only advise running it if you hit a lot of early Jinx units. In terms of the comp’s tank, I prefer Riven and find her best items are Spark, Bramble, and Sunfire (Warmogs and Redemption also work). For Jinx, I found the most success running Shiv, Shojin, and Jeweled Gauntlet.

As a note, Jinx reroll is not a comp you should force every game. Besides Prankster and 3 Anima, you can slot in Legendary units like Fiddle/Nunu, try other frontline units like Zac, Vi, Rammus, Sett, or Sejuani, and put extra carry items on Miss Fortune or Vayne.

Note: Played before the Renegade nerf on 1/17

While Talon reroll is still underplayed according to sites like Tactics.tools, people have discovered how OP it is, especially in high elo. Last week Bebe told Robinsongz to spam Talon for ez LP gains, and Robin’s Discord has been chatting about the comp and trading tips.

Talon reroll is particularly good against comps with 1 backline carry (for example, comps that run Miss Fortune carry and Sett frontline). Talon jumps to the backline, kills Miss Fortune, and then takes care of the rest. And, as a bonus, you can pretend Assassin exists again as you watch your Talon hop around the board and one-shot squishies.

Since it’s a 1-cost reroll comp, you’ll want to hit 50 gold as fast as possible. Ideally, you’ll be able to roll above 50 gold at Level 4 and then naturally hit Level 5. From there, you’ll slow roll at Level 5, hit that sweet Talon 3, and make your opponents cry. 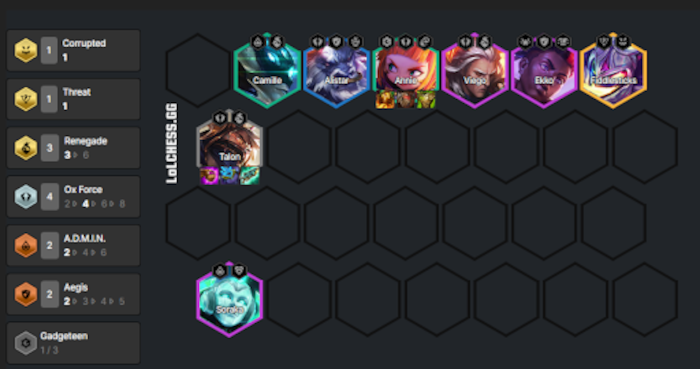 This comp doesn’t necessarily need a tank but if you’ve got components, slam them on Annie, Alistar or Ekko. In my games, I went with Annie because she’s a good early Oxforce unit. Talon wants items like Spark, Jeweled Gauntlet, and Hand of Justice or Hextech Gunblade for healing. Spark is great on units like Talon because he can shred the magic resist of backline carries and apply extra magic damage when they cast an ability.

You can play 3-6 Renegade depending on if you hit some spats, 2-4 Oxforce (I’m not a fan of 6 Oxforce), and then whatever else fits onto your board like a second Admin unit or Fiddlesticks/Urgot. If you want to see how a top competitive player pilots this comp, check out the Talon reroll section in Robin’s handbook.

So, how do all these offbeat comps stack up? Soraka was my favorite comp followed closely by Talon reroll and, finally, Jinx reroll. If you like forcing comps, I’d go with Talon because he’s OP in the current meta. As for flexing between Talon and Soraka, try Rod opener and pivot between the two depending on your early components. If you get a tear and a good Heart opener, go Soraka. If you get an early Spark + Talons, slam it and get ready to press your D key.

Huge thank you to the TL community—in particular Robin and Kurum’s discords—for their ideas and suggestions. Give these comps a try in your games and let us know if they boosted your LP gains, or just made you enjoy TFT a little more! For all the Sett haters out there, good luck in your climb and good luck defying the meta.