The event horizon. Commonly used for black holes, it’s an area from which even light cannot escape. Physically, it’s when the pull of a back hole becomes so intense that the speed needed to escape would have to be faster than light. Metaphorically, it’s a place where, once you’ve gone, you can never look back.

Team Liquid stands on their own event horizon at The International 2022. With TI Champion Matumbaman retiring after this tournament, every game 3 ends in one of two ways: Liquid loses and Matu rides off into the sunset, or Liquid keeps the dream alive, comes one step closer to the Aegis of Champions, and plays at least one more match with their close friend.

Liquid teetered on the edge of that event horizon this past weekend, coming closer than ever to falling in. After two brutal back and forth games against Thunder Awaken in the Lower Bracket, m1CKe & co. found themselves trying to end Game 3 before their opponents’ cores resurrected. Here’s a clip of the action, make sure to keep an eye on Pangolier’s health.

Players almost never survive at 1 health in pubs, less so in pro, and even less on the TI Mainstage. We’re going to break down how “almost never” became a reality and how Liquid pulled loose from the black hole.

First let’s discuss Pangolier’s defensive mechanics. m1CKe’s Magic Resistance was unmodified, leaving it at the standard 25% magical damage reduction. Meanwhile, his Armor was modified by Matumbaman’s Assault Cuirass, bringing it up from 24 to 29, resulting in 63% physical damage reduction.

Now comes the real fun: damage block! After entering Thunder Awaken’s base, m1CKe was on the receiving end of dozens of attacks, making damage block a huge factor in his physical mitigation. m1CKe had the traditional Vanguard Block from his Abyssal Blade, giving him a 60% chance to block 70 damage. Add to that, Innate Damage Block - an easily forgotten part of a melee hero’s kit. Back in 2019, when Stout Shield was removed, melee heroes were given a passive damage block, one that was eventually buffed to its current form: a 50% chance to block 16 damage.

This all means that m1Cke had an 80% chance to block damage with either Vanguard Block or Innate Damage Block and a 30% chance to to block damage with both (resulting in 86 total damage blocked), something I’ll refer to as a Double Block from here on out. Now that we’ve got our odds set, let’s take a look at how m1CKe performed compared to our expectations. 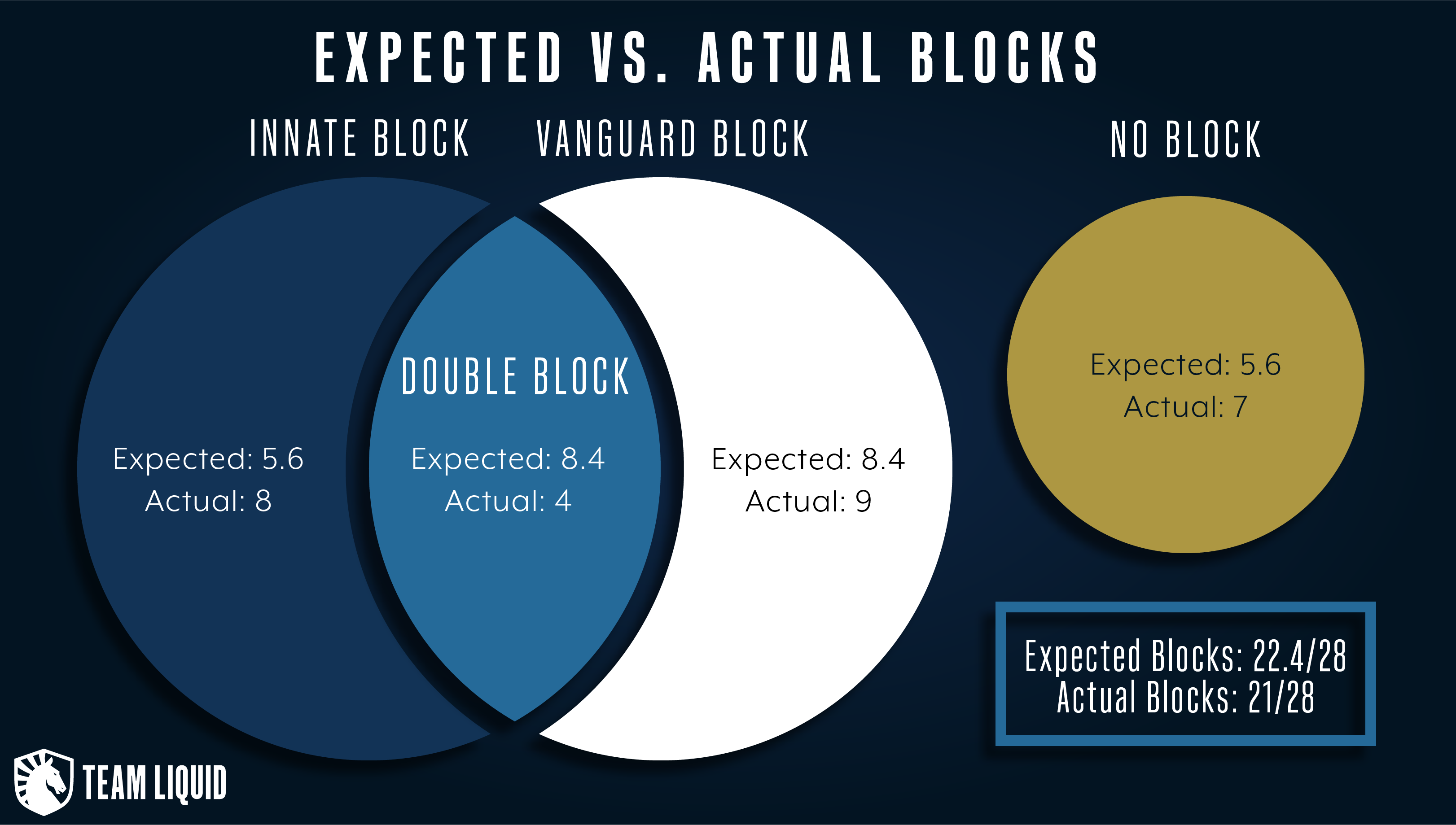 From this graphic we find that m1CKe actually low-rolled his total blocked attacks in this situation. Looking at the individual blocks, he underperformed in the two most beneficial categories, Vanguard-Only Blocks and Double Blocks, while subsequently overperforming in the two worst categories, Innate-Only Blocks and No Blocks. While the total numbers make it look like m1CKe was close to blocking his expected number of hits, the difference in values between Vanguard Block and Innate Block means the actual amount of damage blocked was still much lower than it should have been.

The bottom line: m1CKe only ends up blocking 79% of the damage he should have, putting him right on the event horizon. He was one coin flip, one less block, away from the end. If he were any less lucky, he would’ve been dead.

Now that we’ve covered the more mechanical aspects of this fight, let’s take a look at the whole picture. Thunder Awaken’s wombo combo pumped about 3000 damage over four seconds onto m1CKe, so there was much more at play than physical damage. In addition to the towers, we saw an Unleashed Marci rebound in, beginning the beatdown of a lifetime. The Undying stayed true to his name, returning to life and adding in some serious damage with Decay and Soul Rip. Last but certainly not least, Enigma’s Malefice added a whopping 800 pure damage from Black Hole. 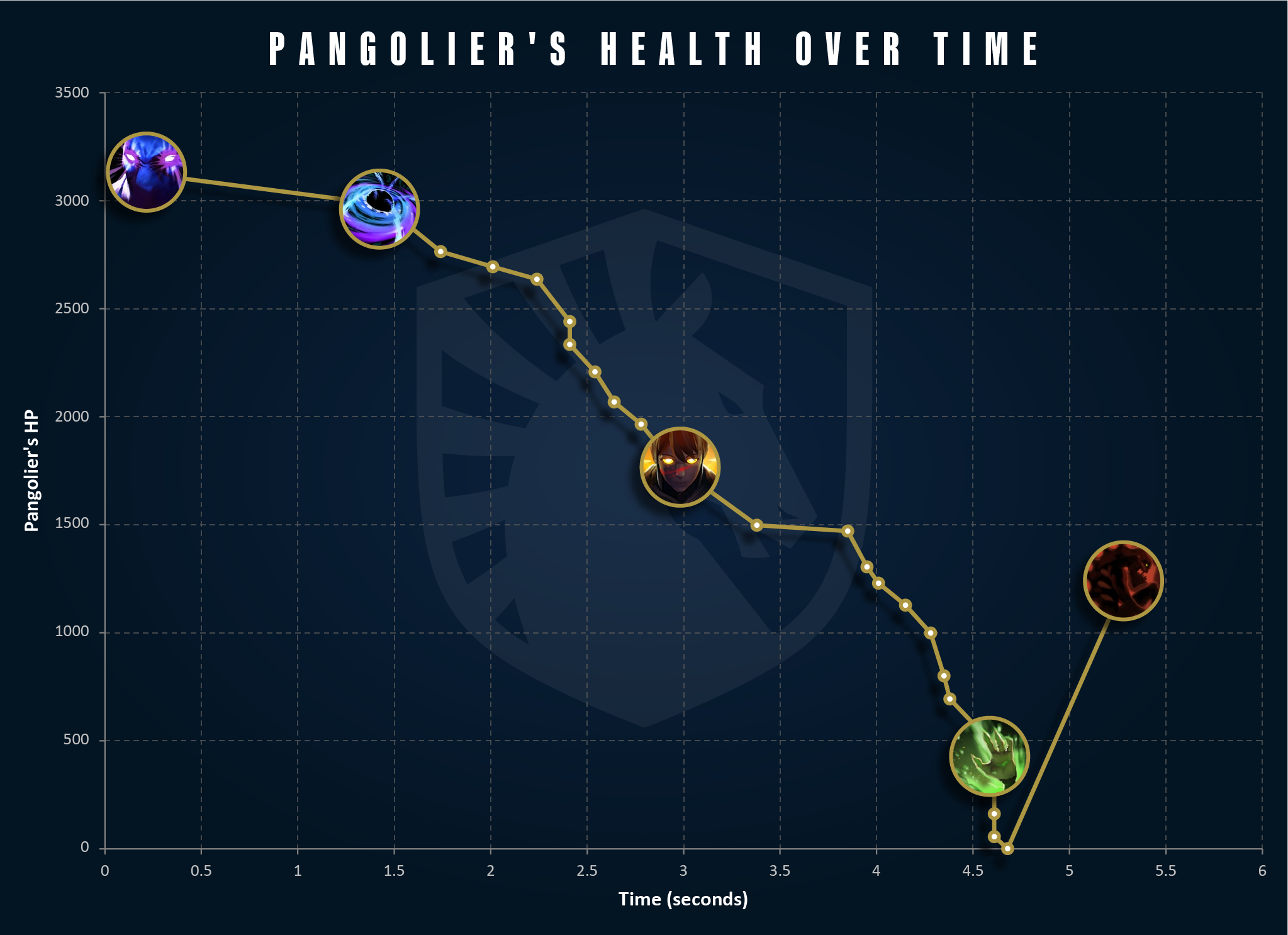 Thunder Awaken threw everything they had at m1CKe. Once the Black Hole begins, his health drops rapidly and with the wide radius on Black Hole, none of the other Liquid players can immediately come to his aid. Eventually, though, Matumbaman manages the rescue, infesting m1CKe’s Pangolier to give him over a thousand extra health to work with.

Still, the graphic above doesn’t quite do the moment justice. The timing is so precise and the window is so small that we need to zoom in and focus on m1CKe’s period of utmost peril. On the milliseconds where he sat at 1 HP. 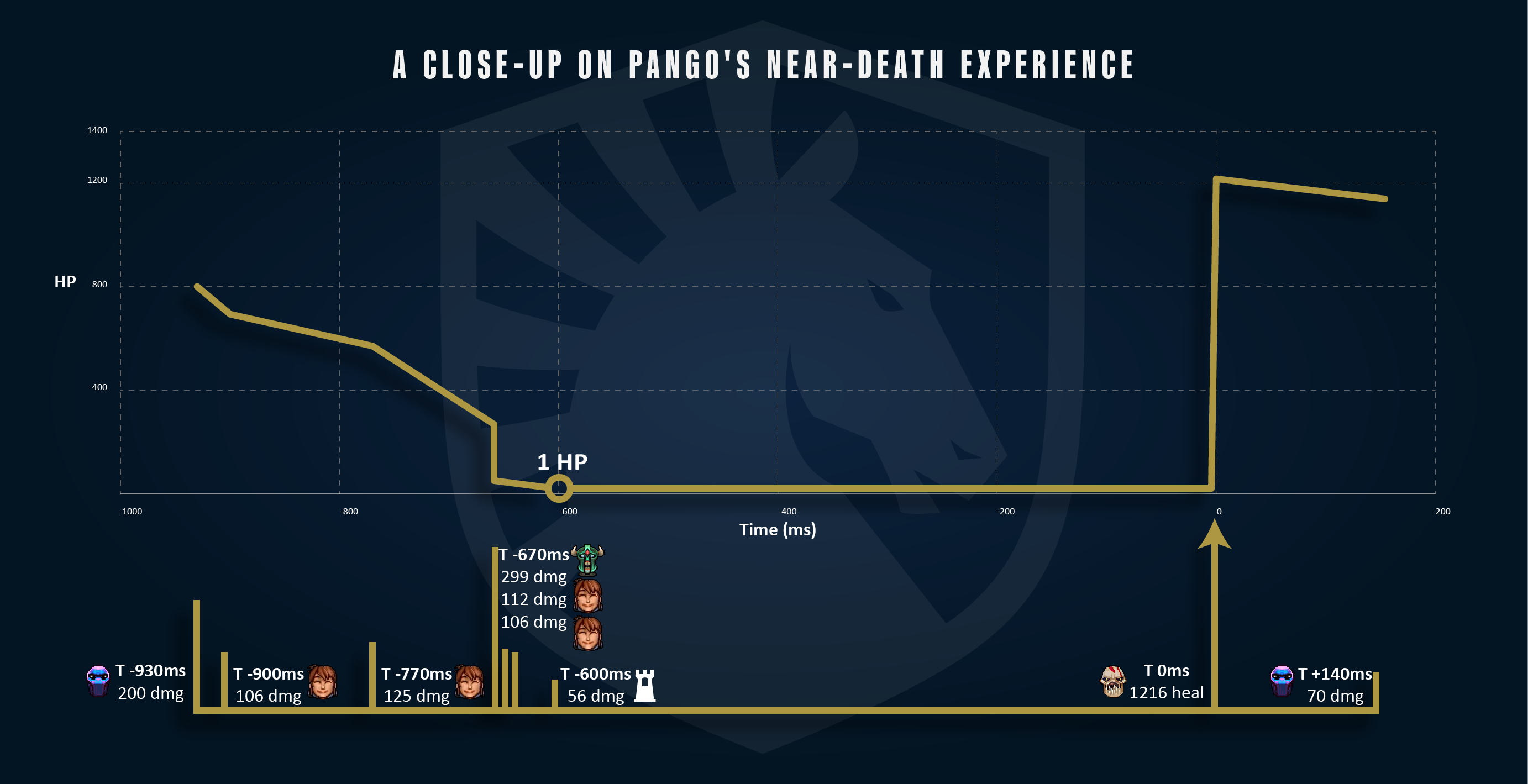 This timeline reveals a few impressive things. Notably, Undying cast his Soul Rip on Pangolier in the same server tick as Marci’s last Unleash strike, stacking up a total of 517 damage in the same 10-millisecond window. The real deal, though, is the timing of Matumbaman's Infest. He managed to get it off 600ms after m1CKe dropped to exactly 1HP, only 140ms before Enigma’s attack landed. That’s a whopping 0.14 seconds. For reference, the human eye takes about 0.33 seconds to blink.

When we say, “blink and you’ll miss it,” this time we mean it literally.

This brings us to the final - and maybe most impressive - aspect of this play. The distance. Dota is a game of many factors, we’ve got all sorts of numbers to look at between health pools, block chance, bash chance, mana costs, and more. But you can’t forget distance.

One might look at the timeline above and think that that long period at 1HP was a slow reaction from Matumbaman, that he could have done better if only he cast Infest sooner. They’d be wrong. Matumbaman’s execution here was immaculate and I’ll show you why. 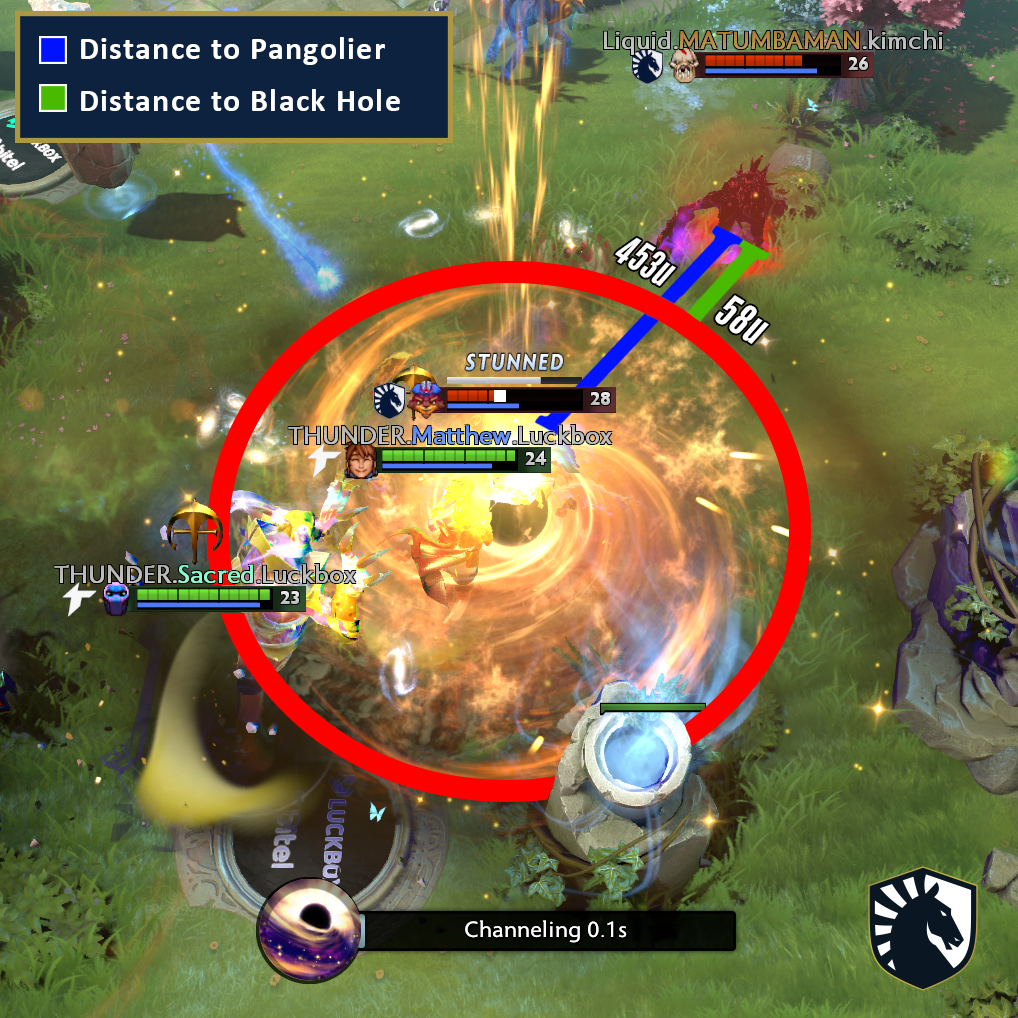 Matumbaman saw what was happening to m1CKe and adjusted his positioning, moving to the spot you see in the screenshot above, barely outside the event horizon. He then preemptively activates his Rage ability to gain the necessary Magic Immunity and 30% extra move speed to reach Pangolier in time. If you watch the clip back, you’ll see that Matumbaman moves perfectly so that he avoids any stun from the Black Hole but still arrives just in time to save m1CKe. Any faster and he risks the stun. Any slower and the Pangolier falls.

You might ask, “Why did this even matter?” Liquid was going into Thunder Awaken’s base in a 5v3 scenario, they couldn’t lose that fight, right? For Thunder Awaken it wasn’t about just winning the fight, it was about delaying the game long enough for their cores to revive and rejoin.

This kill on Pangolier was worth a lot more than it would seem at first glance. First, he didn’t have buyback so there was no potential for him to rejoin the fight. Second, the gold that Enigma and Marci gained from killing him barely pushed both of them into buyback territory, allowing them extra lives to keep throwing into the fight. If m1CKe dies there, they are both able to buyback instantly and not lose 10 precious seconds of base defense time. By the end of the game, all of Thunder Awaken’s heroes were alive and Liquid was on the verge of losing multiple heroes. One more damage would have saved them a few seconds, a few seconds would have saved their ancient, and then the story might be Thunder Awaken’s, not Liquid’s.

But, Matumbaman saved m1CKe when it couldn’t have been closer. Liquid’s run at The International continues, as they walk the thin line between dreams and defeat. But that’s life for Liquid. For the players, for the fans, for all parts. When you follow this org, you get used to a few event horizons.