We are a Wave of One: Team Liquid

A WAVE OF ONE

Over the years, Team Liquid has become the home of champions—winning major titles in StarCraft, Dota, League of Legends, CS:GO, Smash, Quake, R6, and more. In the process, we’ve built up. We went from a single StarCraft clan into a global organization that’s spread across some 20 esports. Our emblem has turned from a banner on a website into a shield of pride—a symbol that draws in thousands of fans from across the entirety of esports.

But, for all the fans we draw in, we’re not always unified as a fandom and community. As we’ve brought our banner across the esports landscape, it’s taken on a different meaning in each title it has entered. For League, our banner represents the superteam. For CS it represents NA’s primary hope. For Valorant, it’s EMEA’s own wildcard. These meanings have stretched our banner so wide that it’s not always clear what its colors represent; what Team Liquid is, not as a single roster, but a single team and fandom. This is what A Wave of One is all about.

A Wave of One pulls together rosters from different ends of the esports world—the RTS, the MOBA, the FPS all united under the Liquid banner and in their own animated world. It’s both an ambitious crossover between our star players and a capstone in a long effort to bring the fanbase together and unify it under a clear team identity and an even clearer moral fabric. 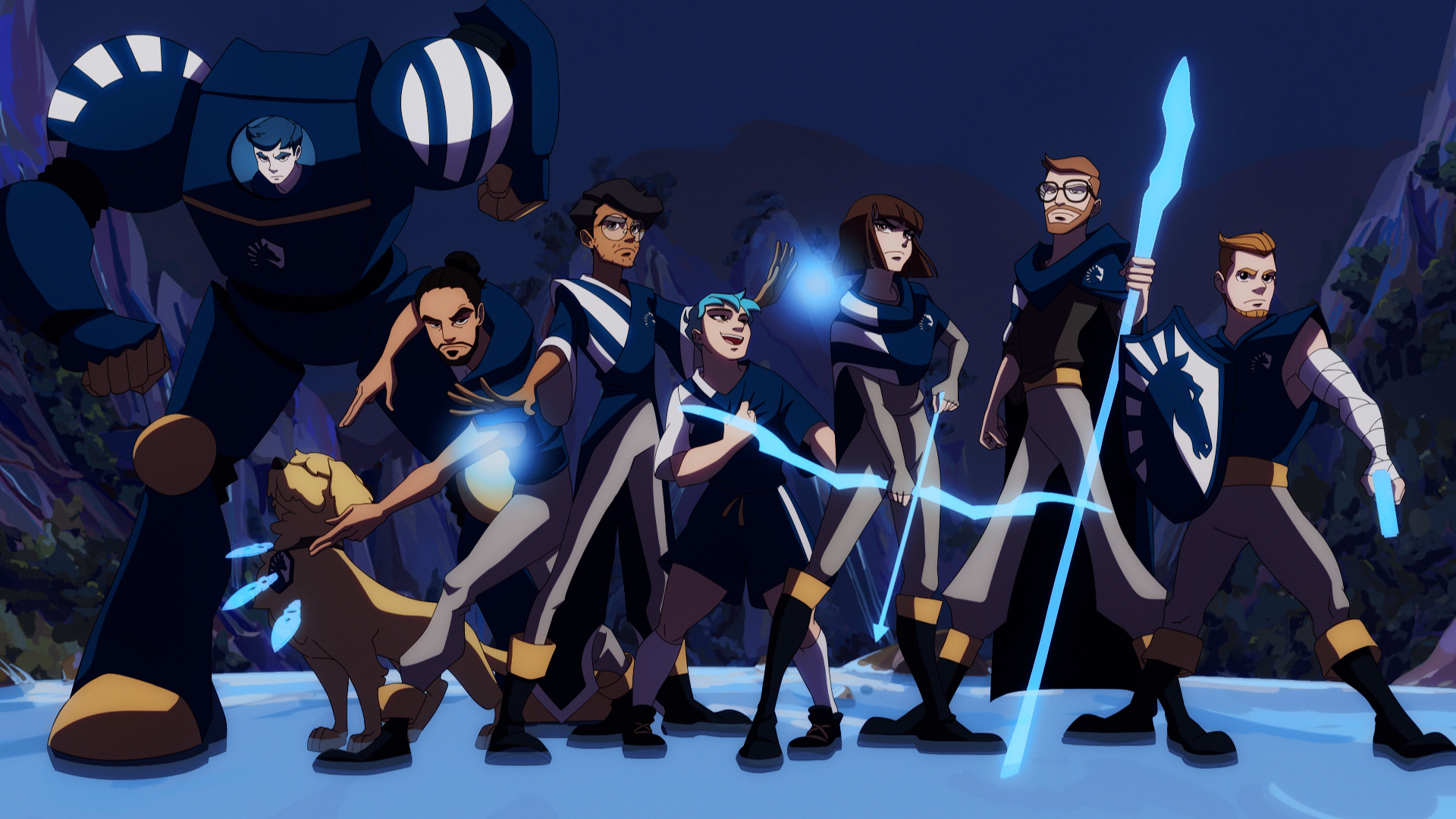 In the past two years, we’ve been expanding—new teams, new staff, new leadership—all with the conscious effort to build a space for all of our fans to live in. That space comes, most obviously, in the form of Liquid+ (our own fan-rewards platform). But it also comes in form of charity drives like the Mythic+ Pro-Am and IMC’s room to read Streamathon; it comes in form of fan contests like A Wave of One and Jersey Mike’s A Fan Above; it comes in form of value and community-driven content like our Pride Mural, our API Food Zine, our Eve Ascension tournament, and the Alienware’s Good in Gaming initiatives.

All these efforts, initiatives, and ideas are to unite the tides of Liquid into one wave. To work together to build the Liquid fandom into its own kind world within that wider esports galaxy. A world built around the clear values of equality, sustainability, inclusion, diversity, and a sincere effort towards a better future. We built the story of the video around these ideals too—as a battle against negativity and for a more diverse, broad, and sustainable future of esports. We hope you’ll join us in cheering for all the teams wearing out colors, in building that world, and in reaching for that future. 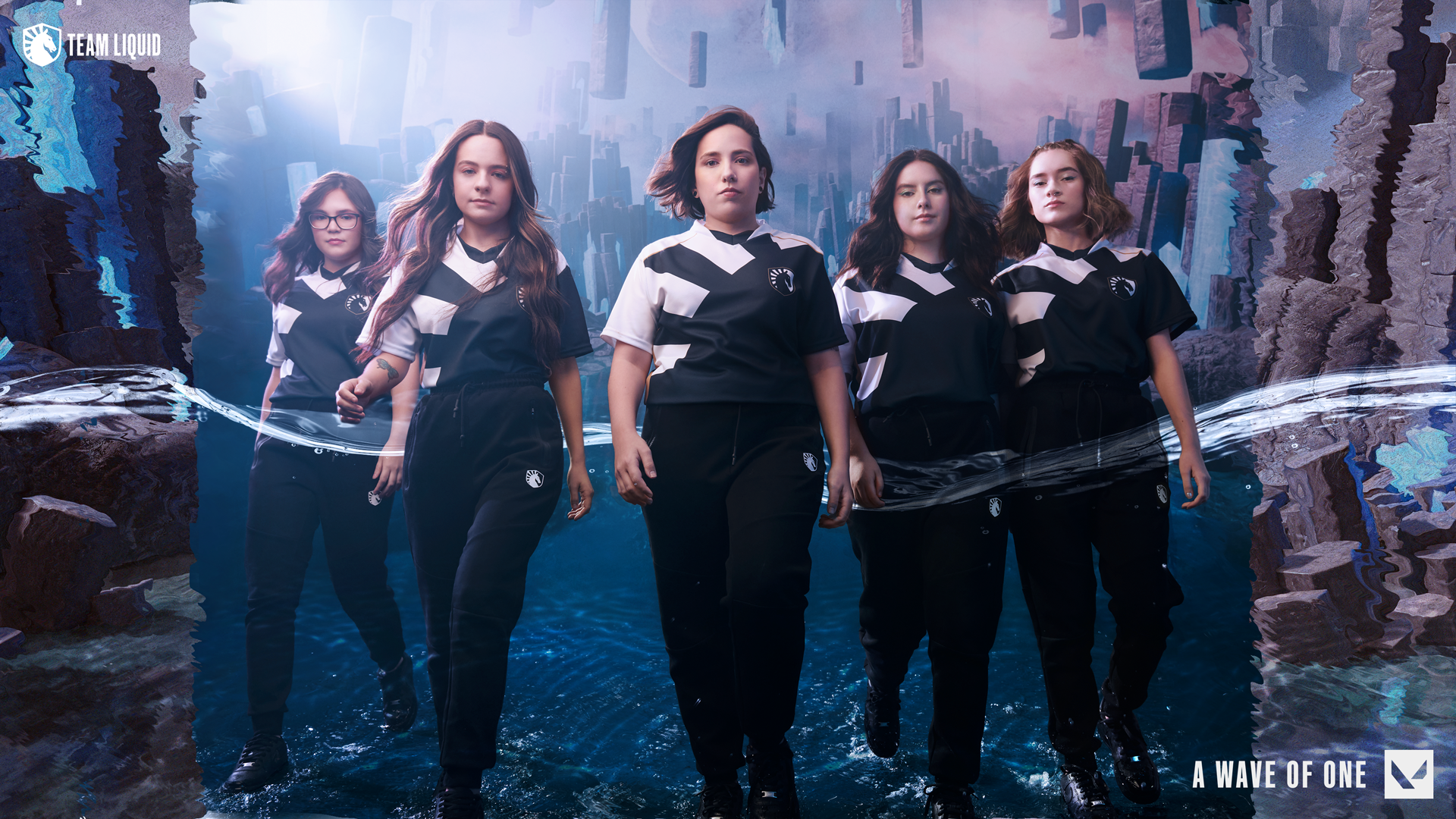 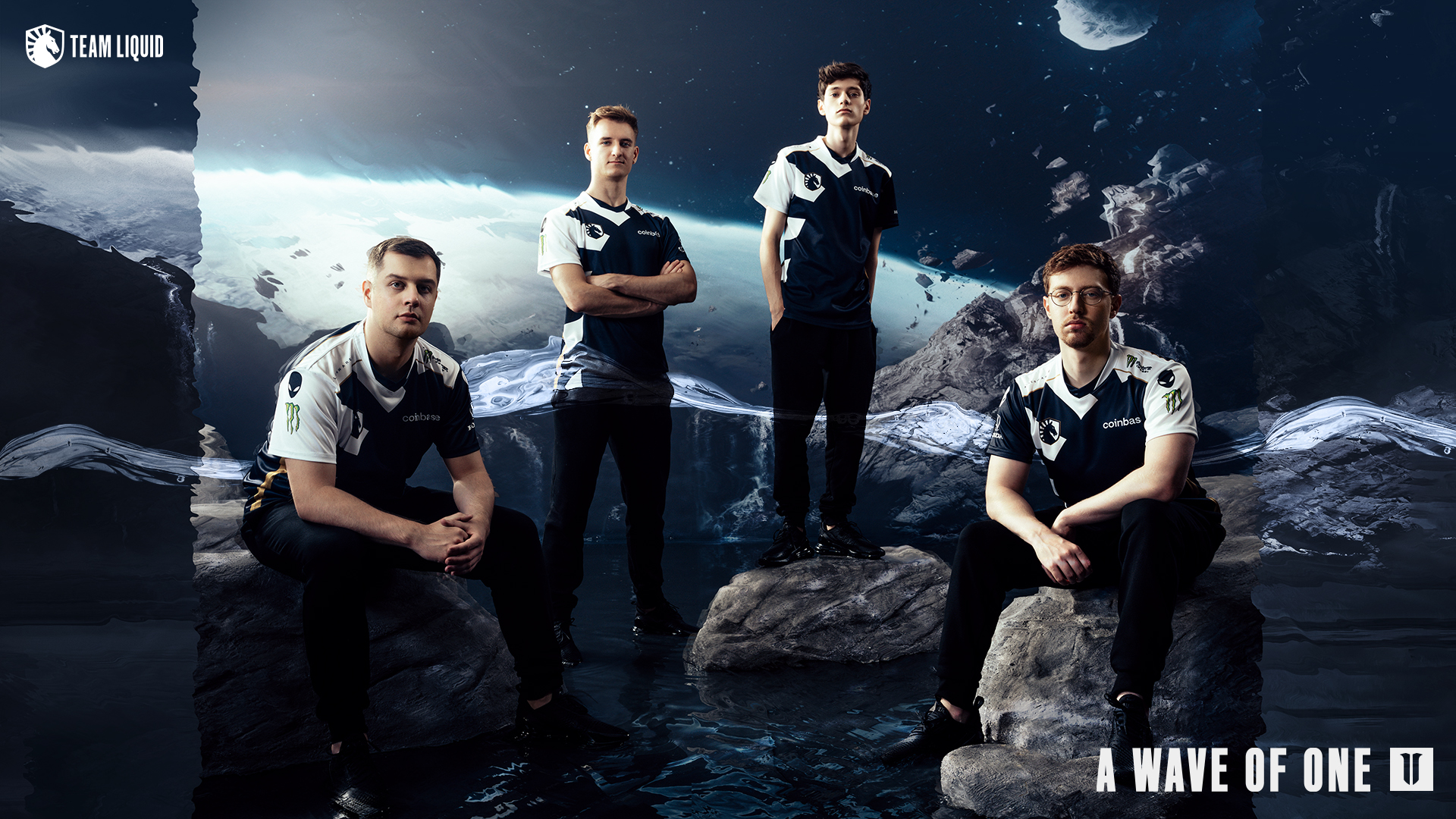 As we build Team Liquid’s future, we want to reflect on the past. As one of the oldest organizations in esports, it’s our long history and our deep veterancy that leads us here to A Wave of One. It’s the lessons of the past that shape the future we’re trying to create.

At its origins, Team Liquid began in a time where opportunity was not ample in esports. A time where none of this was big enough to have these dividing lines. Where esports was its own small, self-contained planet.

As soon as gaming became a professional sport in the form of Korean StarCraft, the roots of Liquid were sewn. Many other organizations began to form with us, but most of them succumbed to the sheer chaos of those early days. In those early days, it was fandom and passion that kept us alive. Fans began the Team Liquid community in 2000, participating in the top forum to discuss StarCraft, tl.net. Early on, there was little money, and so it was mostly this passion for the game that allowed Liquid to field teams, create tournaments, and even build into new esports and platforms. Out of that communal spirit, Team Liquid launched Liquipedia in 2009, as a community-centric wiki for all esports in 2009.

Not long after, from 2010 to 2014, Liquid would widen the banner to new esports like Dota and Smash. In 2015, a merger with Curse meant that Liquid would not only grow to cover League, Counter-Strike, and Halo, but also that Liquid would become even more global. Liquid had fielded Korean StarCraft players before but now, they’d have an office and staff in NA. They’d lay the groundwork for being a top NA team in League, and the region’s main hope in CS. It was a massive step towards the Liquid we know now. 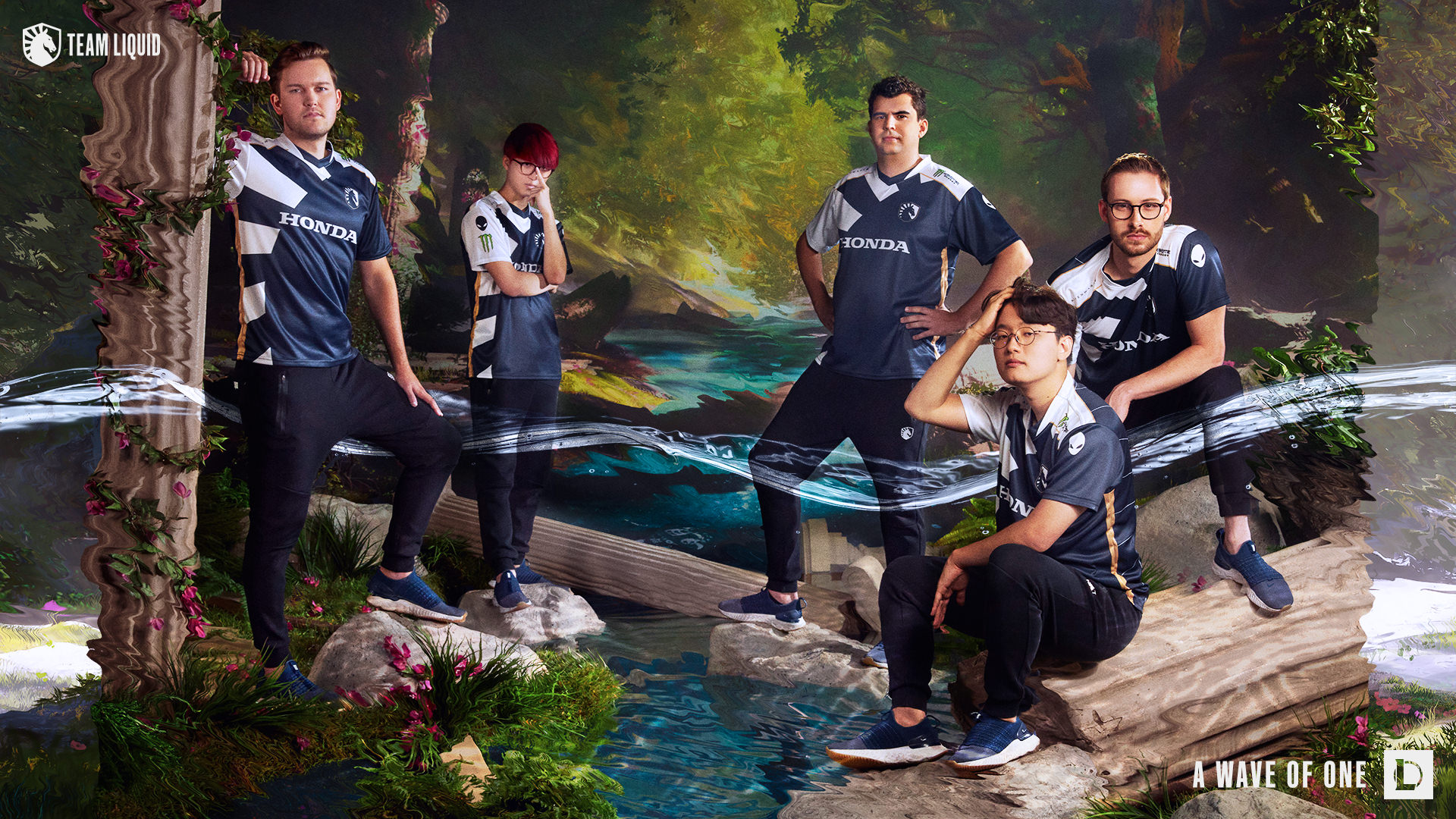 RISING UP // THE SWELL

In 2016, Liquid would start to hit strides in some esports—and take the steps needed to lead in others. That year, Smash fans saw Hungrybox, one of the 5 Gods of Smash, defeat his divine demons at EVO 2016. In 2017, Liquid’s reign on the Nintendo esports scene took off, with Hbox beginning on what would be a 3-year dynasty in Melee and with Nairo and others cementing Liquid’s name in the Smash 4 scene. At that time, Liquid welcomed Hungrybox’s coach, Crunch, into the org. The simple addition showed that Liquid was learning how to build the organization and how to create the support structures that pro players need to succeed. Today, we’ve built out a whole staff of coaches, analysts, physical therapists, and psychologists to help our players reach new heights.

While Hbox was rising to the top in Melee, Dota2 saw a historic run at 2017 TI, mounting one of the best Losers Bracket runs in the esport’s history. Dota’s run ran parallel to League’s own fight for survival in relegations. Not only would League survive, the organization would pour everything into a franchising application that was practically a novel and—in 2018—would become the org to beat in NA. Looking back, 2017 was something of a turning point.

Around the same time, Liquid was finding its identity in the FPS world with its CS:GO team. Team Liquid entered Counter-Strike and Halo in 2015, as well as Overwatch in 2016 and PUBG and Quake in 2017. In those days of growth, Liquid’s banner traveled sometimes too far, stretching too thin, running into the contractions and collapses that come with expansion. In the end, it would be our 2015 CS roster, made up of many fresh-faced NA talents that would become everlasting. (Though we’ve also built a proud legacy in Quake and PUBG.)

Team Liquid entered into Counter-Strike: Global Offensive in 2015 as a promising but unproven NA team. A year later, they added S1mple—the soon-to-be greatest CS player of all time—to the roster and were the first majority-NA team to reach a Major grand final at ESL One: Cologne 2016. In 2017, the team continued to refine the roster, dropping S1mple but signing Twistzz and building towards a powerful core in 2018. In 2019, that core of talent hit its potential and earned the second-longest win streak in CS (22 series wins!), secured the fastest Grand Slam in CS, all while ripping Astralis off a throne that no other team could even approach.

By 2020, Team Liquid had grown into a truly global, multi-faceted and multi-fandomed organization—actively competing in over 15 esports, and accommodating new staff, rosters, partners, and facilities. With the launch of Liquid+, we began the effort to unite our fandom. With Liquid+ we aimed to create a more connected world for fans, and a way to reward the community that made all of this possible.

It’s taken some failure to pave success for Team Liquid. It’s taken risk and belief in going an extra mile to create a professional esports org, to give our players everything they need and to give our fans as much as we can. It took meticulous intention to do the right thing—and sometimes falling short of that intention. It took putting players first and caring deeply about the fans who make this world of Liquid as large and diverse and multi-faceted as it is.

A Wave Of One is about all of those facets and all of us—all of our esports, players, staff, and fans. It’s about bringing everything we’ve built together.


A Wave of One is for every person who finds inspiration in the Liquid world, everyone who turns that inspiration into action, creation, and community. On the surface, it’s one animation but underneath, it’s a campaign to create a TL community united in values and effort—a community that can bring people into esports and support those already within it.

We made A Wave of One to create a community beyond rosters and title runs. We made it to say that you are not alone. Not as a part of Team Liquid. It may be one esport that brings you here, but you have discovered a universe of people more like you than you imagine.

Thank you for being fans of Team Liquid. We are forever yours. Please head to TL.GG/WAVEOFONE for the fan packs of your favorite teams, a streamer quest, rewards, and links to all content included in a Wave of One.