There aren’t really a lot of resources out there for high-level drafting in Dota 2. The closest you get is a panel of analysts at a Major. While those panels often have good players or experienced analysts on them, they rarely have active professional players on them. Even more rare are active drafters willing to partake in the panels.

The truth is that there are a ton of things in Dota that make drafting super interesting and it sucks that there’s nothing out there to show it off. It’s so often that details of drafts are misunderstood or not appreciated in the way that they could be. The more you learn about drafting, the more interesting it gets. You know, there are actually some apt comparisons to make between drafting in Dota and drafting in Heroes of Newerth.

HoN was where I first started drafting and originally my concepts were quite simple. In HoN it was able to be that simple because it almost always came down to, “If I can deal damage faster than my opponent, I’ll win.”

This meta developed because the game was so initiation heavy that initiation and burst were the only things you had to account for. While that’s a simplified version of drafting in HoN, there is a lot more going on in Dota drafts. There are factors like:

Does your draft deal more damage or less damage than theirs?

Is it burst or sustained?

What about physical or magical? 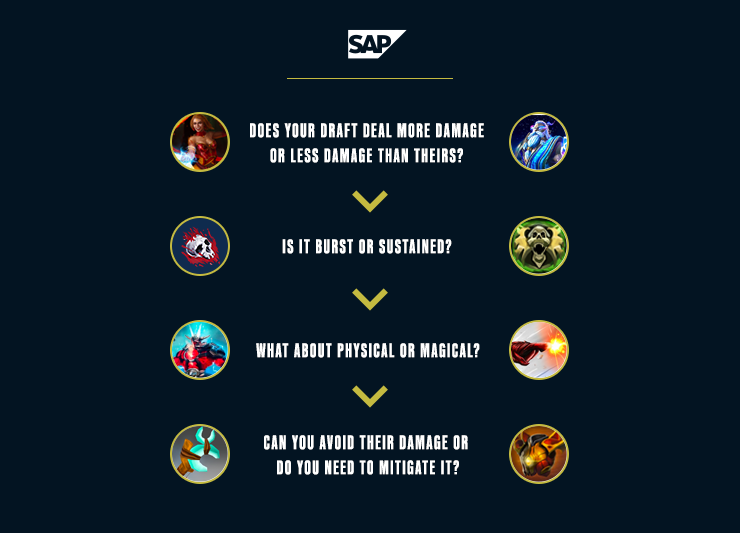 And that’s only considering damage. That’s just a small portion of one aspect of drafting, without even considering individual heroes. For example, let’s say you have an amazing draft, but they last pick Alchemist. Suddenly the amount of damage you need to output is a lot higher than you expected because that hero simply tanks more damage than any other hero in the game. Or maybe they pick a Broodmother, but you don’t have any catch, so you can’t even keep up with her to deal damage. All your damage becomes pointless.

Over time you learn to respect the fact that, when you go into a game, you need to take all the things into consideration. You have to make gambles and take risks, such as “I think this team doesn’t play Meepo and therefore I can draft without considering Meepo in this game.” But even then, it’s important to consider every single hero and think about how one specific pick can change the dynamic of the draft as a whole. I learned this the hard way thanks to one team in particular. Despite my confidence that they wouldn’t last pick Meepo because it didn’t fit their team, they just kept picking meepo and it just kept working.

While these are all important aspects of drafting, today I want to talk about one that I haven’t mentioned yet.

Items play a huge part in drafting, much more than people realize. I’ll call this idea of drafting around items “Itemized Drafting.” This kind of drafting actually reminds me of my roots in Heroes of Newerth. Often in HoN, you wanted to have certain items on your team, so you would pick heroes that naturally built those items. In Dota there are a lot of examples for this, but we’ll just start with Vlads.

What heroes come to mind when I say Vlads? For me, it's Beastmaster, Tidehunter, and Brewmaster, just to name a few. It’s easy to think of these pairings because of how often they come together. With Beastmaster, for example, it makes sense for his toolkit and makes the hero even better at what he already does well. So if you have a draft where you need lifesteal and armor, you’ll think of Beastmaster.

You can also use items to supplement the weaknesses in your draft. In the same way that only building natural items for your heroes is a sign of a good draft, awkward item builds can signal mistakes, or gambles, made in the draft. If you see weird item builds, it means something strange is going on, something is different from the norm.

I’ve done a lot of talking about ideas and examples, it’s time to dive into some real stats.

Let’s talk about one of the most common item counters for a hero: Eul’s Scepter vs. Kunkka. First, what makes Eul’s Scepter good against Kunkka? The biggest influence it has is the ability to stop Kunkka’s X Marks the Spot from pulling you back into a Torrent plus Ghost Ship combo. Next, I had our friends at SAP pull some data for us to look into it. Turns out, Eul’s Scepter is bought 50% more often against Kunkka! That’s a huge difference given the sheer number of games we looked at, over 1,300 professional Kunkka games.

So now that we know for a fact that Eul’s counters Kunkka, who are the natural Eul’s carriers? Four of the most common are Death Prophet, Leshrac, Dark Willow, and Lina. All of these heroes build Euls way more often than the average hero. 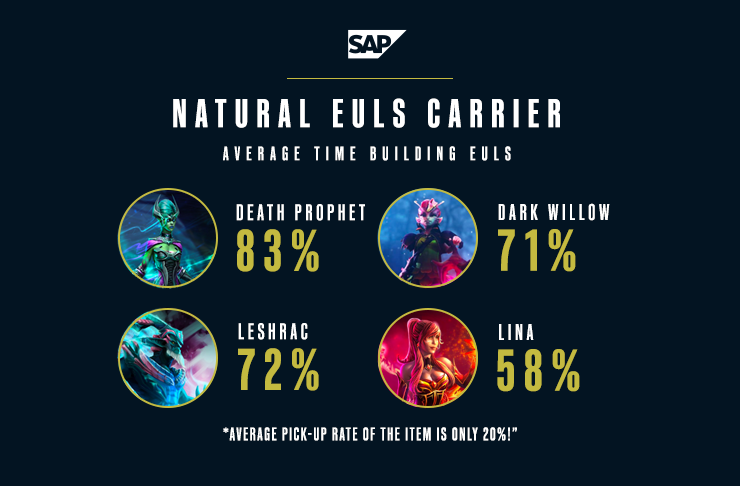 We played against Kunkka 9 times in this pool of games. We picked up a Natural Eul’s Carrier in 8 of those games and on top of that, we ended up building a total of 13 Eul’s against Kunkka. That number being so much higher than our number of Natural Eul’s Carriers shows how you can supplement possible weaknesses with items. Even if we got last-pick Kunkka’d, we could still pick up more Eul’s Scepters to make sure we had the tools to beat him.

Eul’s Scepter is a great item for this kind of analysis, but it’s important to remember that you can approach every item in Dota with this thought process. There are a few more straightforward examples, such as Heaven’s Halberd or Pipe of Insight.

Halberd is an interesting example because it has the dual-purpose of providing the carrier with evasion and strength while also allowing them to disarm an enemy hero (an ability which lasts even longer when used on ranged heroes). This makes it a very natural pickup for a hero like Huskar, who benefits greatly from the evasion and a natural counter for a hero like Templar Assassin, who is entirely dependent on her auto attacks.

Pipe, on the other hand, serves a single purpose — but does it incredibly well. It beefs up your whole team, and especially the one carrying it, against all magical damage. For some heroes, this means it goes from a natural counter to a vital part of beating them. I inquired about getting some more numbers for these items and SAP was kind enough to oblige. Below we’ve got the stats for Heaven’s Halberd, Pipe of Insight, and a bonus item, Crimson Guard. 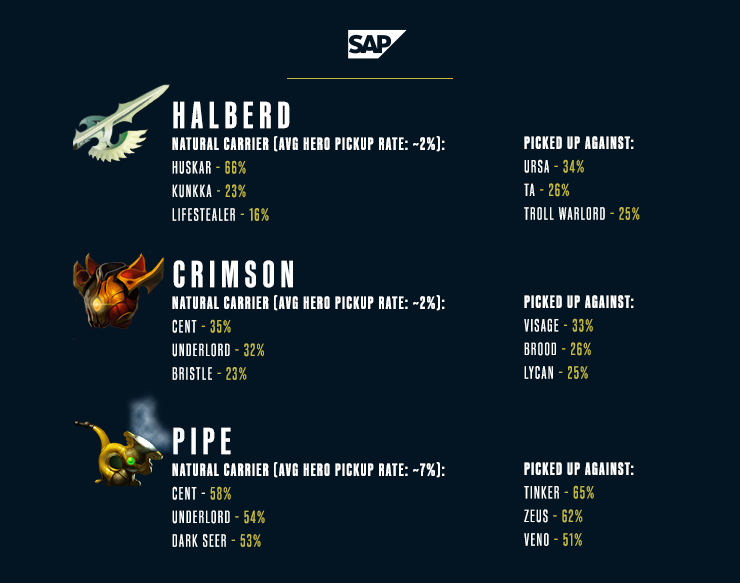 Unfortunately, I think it’s rare that people look at drafts and items together like this. Try to identify which team is stronger when, see if the enemy team lacks damage and, if they do, what ways do they lack damage?

Do they have lots of damage but lack crowd control? If so, we can just build enough mobility to run around them.

Or on the other hand, maybe they have so much crowd control that the only way to survive their damage is to just get tanky enough.

In the first case, items like Force Staff and Glimmer Cape are amazing, whereas in the second scenario, suddenly items like Pipe or Assault Cuirass become highly valuable.

Next time you watch one of our games, take a look at the draft from the perspective of the items. You might make some new discoveries that could even help you in your own games. Just make sure you don’t pick a hero that you meant to ban.