Capcom Cup: Journey to the End

The worlds been traveled, the stage is set. We’re proud to announce that both Nemo and John Takeuchi have punched their ticket to the Capcom Cup. The year long culmination of the global Capcom Pro Tour. Capcom Cup is the final stage for 2019, where the 32 best players will battle for the $250,000+ prize and their moment in fighting game history.

The near miss of Capcom Cup 2018 didn’t deter John but only served as motivation coming into 2019. John started the year with a bang, placing 13th at the CPT2019 kick off event Final Round followed by his first top 8 appearance only two weeks later at NorCal Regionals. These two Premiere events yielded a bounty of precious CPT points that put John on the path to contention from the opening bell.

John showcased tremendous improvement this year. His play was crisper, more confident and for a Rashid main, quite patient and methodical. John may be a young talent but he plays a smooth, ‘lame’ style of an older generation. With his improved consistency and patience he was able to close out games that may have slipped away in the past.

In the final event of the regular season John highlighted these improvements by besting legendary fighting game champion, Tokido, who has played spoiler a number of times to John in tournaments. John began the year losing to Tokido at NCR, and closed out the year with a clean victory over his demon at the North American Regional Finals.

After his outrageously close finish last year John made his exit with a promise to grow stronger in 2019. Everyone paying attention has seen this improvement and we couldn’t be more proud that John was able to secure his way into the Capcom Cup.

I got 3rd place at the LCQ. I was able to participate in a lot of overseas tournaments thanks to my team @teamliquid and all of your support. I really appreciate you all.

In return, I want to try my hardest to become a truly strong person next year! #letsgoliquid pic.twitter.com/fC4NcU51xj

Nemo is known for his erratic, dangerous and otherworldly play that sparks constant debate if he’s a genius or a madman, but his results can’t be argued. We saw incredible performances from Nemo throughout the year with 6 top 8 finishes and a historic first. Nemo secured his first victory under the Team Liquid banner at Headstomper near the start of the season and the power-up carried all year.

Nemo also found victory in the CPT:Online Asia event that he originally had no intention of playing in. He decided to join last minute and thank goodness he did because despite being online and a ranking event, it net roughly 20% of his overall CPT points, without that win he’d be in the LCQ right now rather than studying his bracket for Capcom Cup.

[Nemo styling in the Grand Finals]

Nemo has a knack for cutting it close. He got into the 2017 Capcom Cup by winning the last chance qualifier, a single day event with a winner take all prize for the final seed into the season finals. In 2018, he narrowly skirted the points cutoff to sneak in at the end. This year was more of the same. While Nemo looked to be in a good position going into the final tour stop, the North American Regional Finals, his clutch top 8 performance solidified his participation at Capcom Cup. In a cruel twist of fate, Nemo had to beat John for that top 8 finish and the juicy SUPER Premiere points that came with it.

Due to the seeding being done through the year long pro tour, all but 1 of the 31 combatants know their opponent and the path to glory. In a stacked finals there is certainly no easy path but fortunately our team liquid heroes will avoid the way too common occurrence of team kills early on. Nemo and John are thankfully on opposite sides so they are only likely to meet up in the grand finals (which we’re more than fine with) or deep in the loser bracket, which would make us very sad.

First up for Nemo is a match-up he should be familiar with, Oil King’s [Rank 12] offensive powerhouse, Rashid. Nemo has plenty of practice against the turbulent winds of Rashid but the arguably strongest character in the game can work around your knowledge. Rashid is free to control the pace of the match and Oil King never lets off the gas. A battle between Nemo and Oil King in round 1 is a candidate for the most insane, crazy, wild match of the entire event. 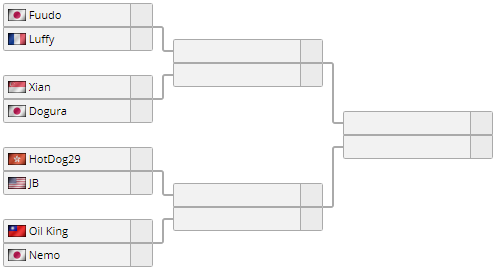 [Take a look at the rest of Nemo’s treacherous path should he secure the win vs Oil King and make your predictions!]

John opens the tournament in a Rashid mirror match versus last years Capcom Cup winner, Gachikun. We said it wouldn’t be easy. Gachikun surprised many with his victory last year and this match will be interesting to watch. While Rashid a tremendously powerful, offensive character in the hands of most players, John and Gachikun take a different approach. These two are likely the ‘slowest’, controlled Rashid players in the world. Their playstyles mirror each other so it will be incredible to see how two of the more unique yet similar Rashid styles clash in the opening match. 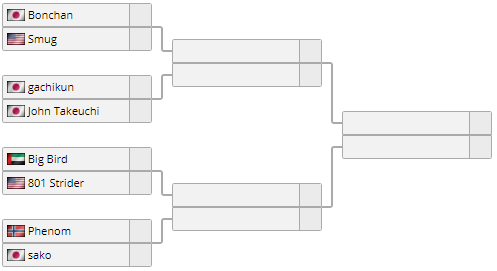 [John’s path, should he whirlwind passed Gachikun, he has a likely 2nd round bout with the 2019 EVO winner, Bonchan]

As the sun sets on the 2019 season, there is one final show. We hope you’ll join us in cheering the Liquid Street Fighter’s on their quest for riches and glory. Capcom Cup will take place December, 13-15th from the Novo Theater in Los Angeles, CA. The event will be broadcast live on twitch.tv/CapcomFighters so be sure to check it out!

Please log in with your teamliquid.net account to post a comment.
StarCraft 2 | Hearthstone | Smash | Dota 2 | Apex Legends | Valorant   TL x IMC x Room to Read: A Streamathon Reflection This year, Team Liquid joined in on IMC's efforts to raise funds for a good cause: literacy and education! IMC has been supporting Room to Read for 6 years now by donating a day of profits to the award-winning literacy and education non-profit. This year, Liquid joined in with a 24-hour streamathon that raised over $8,000. We reflect back on the event, thank the wonderful athletes and creators who helped out, and look to do more in the future.
PUBG   All Ibiza wanted to do was play PUBG For Ibiza, esports was always the option. The single-minded PUBG star began in the ill-fated War Z battle royale and has never looked back since. Walking down that unclear path, he's found a team, a career, and a life for himself.
Smash | Fighters   The next evolution: Team Liquid welcomes Atelier In Japan, Atelier is an aggressive, tech chasing, montage-making top player who's beaten Zackray, Tea, KEN, and many of Japan's best. In the West, he's still only half-known. Learn about Atelier's past in Smash 4, rise in Ultimate, and future quest to beat Tweek and become the best Pokemon Trainer.
Smash   Welcome, Atelier! Japanese Interview A Japanese language interview of Team Liquid's new Smash player, Atelier!