Dabuz is here to take stocks and watch anime

It’s super easy to reduce competitors down to their competition. In reality, every player has a set of deep interests that go well beyond the game they play. For Dabuz, that interest is anime.

Dabuz is a certified weaboo and he’ll say so himself (literally right after this intro). But more than that, Dabuz is one funny and smart dude. When I’m about to sit down for an interview with the one and only NA Olimar legend, I know I’m about to hear some hilarious and insightful stuff. When I was about to interview him about anime, I was really hyped because I knew I was coming away with hot takes, genre lessons, and new recommendations. And Dabuz did not disappoint. He covered animes new and old, weighed in on Moe vs. Shonen, and talked what makes a good waifu and husbando. But I’ll let the man speak for himself. 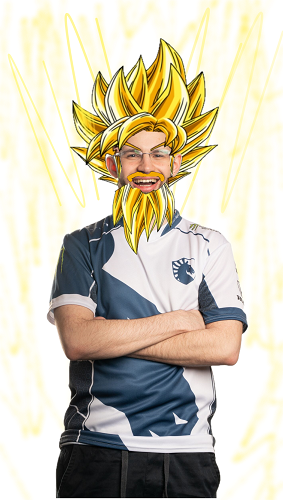 How big of an anime fan are you? Are you a full on weaboo? An occasional enjoyer?

I am in the category of dirty weab that watches way too much damn anime.

[Laughter] That’s great! That’ll make this interview even easier. What then draws you to anime? What makes it something that you would watch over another style of show?

I like how unrealistic it can be. Obviously you can make other unrealistic movies. I love watching Marvel, for example. Marvel movies, any fantasy stuff. I also like the pretty art style. I love colorful things. I love how different it can look. It almost feels like there’s more diversity in just what you can see.

How did you get into anime and what was the first anime you ever watched?

Alright, so I blame dirty, degenerate weab smashers for getting me into anime. Because I was like 13 or 14 years old when Brawl came out and I started going to tournaments, and then a couple years into the game you go online and you go into the forums and you see everyone with their anime waifus, their edgy anime characters, always talking about their weab nonsense! I’m just like, “if everyone talks about this - I don’t like cartoons, those are for babies! I’m not a baby! - I guess I’ll check it out.”

The first one I watched, not including things like Pokemon or Yugioh, the first thing I watched that I remember watching was something called Spice and Wolf.

Was Spice and Wolf the first anime you fell in love with? 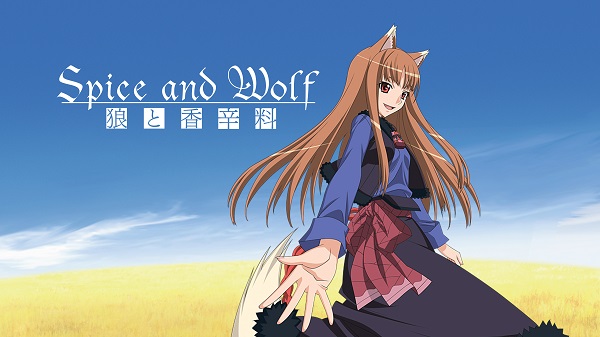 Yeah that was the one you followed and you were interested in.

Yep, and then I read the light novels and they were garbage and I said, “Welp!”

[Laughter] What is Spice and Wolf about and what got you into it?

This guy named Lawrence goes around different villages and he’s trying to survive, by buying and selling goods, kind of manipulating economies of different villages. Then he passes by this town where there’s this wolf goddess who’s supposed to keep the harvest fresh, except people stop believing in her existence. She’s like, “Screw y’all I’m out of here!” hitches a ride in this guy’s cart and accompanies on his adventures. It’s cool because it talks about a lot of different economic topics on basic levels. As someone who’s interested in economics, I really liked seeing this. Also, the main girl, Holo is a pretty cute waifu - so that helps.

[Laughter] That’s part of what does it, if we wanna be honest with ourselves. Okay, here’s a serious one. What’s your anime guilty pleasure?

Oooh, alright, alright, alright. Every now and then when there’s a new season, I see anime and I’m just like, “That looks like a degenerate anime. I’ll watch that.” Like High School DxD or Omamori Himari. See, I’m one of those people where occasionally I see an anime I know is not gonna be any good for me - pure fan service and garbage - and I’ll check it out.

What are your top 5 favorite animes of all time? Can you give a one sentence description of each one?

1) Monogatari - Guy creates a harem of attractive women by solving their supernatural problems.

3) Kill La Kill - Clothes give you the power to fight.

4) Squidgirl - Adorable little child does wholesome, funny things. She also wants to take over the surface because she’s from the ocean. 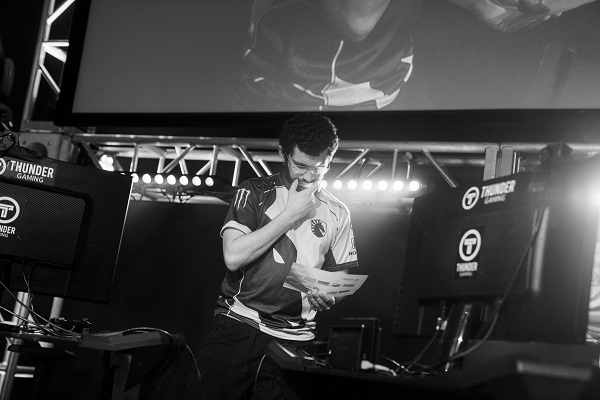 What animes are you watching currently?

This season it’s Vinland Saga - which is THE best anime this season, maybe the year - Babylon, Legend of the Galactic Heroes remake, My Hero Academia, and No Gun No Life.

What makes Vinland Saga so good?

It is Viking themed and it is just pure badassness. All the characters are sick. The combat is sick. The story is absolutely - ah how do I describe the story? It’s so well-crafted but so brutal but also so heartwarming all at once. It’s very weird because those things don’t work together normally but they made a story that makes you care about the characters before they get their heads smashed in by axes.

Since you play a Digital Sport, what’s your favorite sports anime?

You ever hear of something called Keijo. Keijo’s perfect!

Just look up Keijo, I want you to see what this anime is.

Oh my god! [laughter] I do know this anime.

That is the only sports anime I can remember. That was absolutely a guilty pleasure of 2016! But for actual sports anime, there’s an anime about gambling called Kaiji. It’s very, very good. 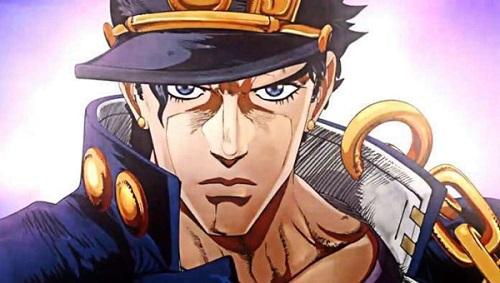 Okay, now can you rank the JoJos from best to worst?

Joseph - (“He’s funny, a cocky asshole but can back it up, and he uses a freaking yoyo to beat up some dumb asses.”)

Jonathon - (“I can’t remember much about Jonathon.” Same.)

Giorno - (“He’s kinda like the generic hero who saves everyone.”)

If you could perfectly cosplay any one character at a major anime convention, which one would it be?

Alright, I don’t even watch one Piece but I think Luffy would be sick because think about this: Imagine I figure out a way to have robotic arms or rubbery arm extensions and I shoot my arm all the way across the anime convention. Especially because then people could ask me all these One Piece things and I’d be like, “I don’t know dude. I just wanted to do this cosplay because it seemed cool.” It would be great to troll people with.

Given one year of practice, which anime character would be the best at Smash?

Oh this isn’t fair! Either of the twins in No Game No Life. Their entire schtick is they’re perfect at games. Give them those characters Smash for a week and they’re probably the best in the world. Give them a year and they’re probably TAS levels of perfect, playing Doubles teams by themselves. They’re playing Ice Climbers with their feet and doing infinites casually.

These are the questions that might get you in hot water. Who is the best waifu?

This is a difficult one, man! Hold on let me check my emotes.

That’s such a Smash thing. Like hold on, let me check my emotes for the moe!

I knew checking my emotes was a good idea. Rem from Re: Zero. She attac, she protecc, she love, and she powerful. She’s also a maid, so like…

Here’s the other side of the coin, here’s the real controversial side -

Asuna from Sword Art Online is a shitty waifu.

[Laughter] I love how you already knew [the question].

I don’t care if Samsora comes for my neck on this one, Asuna is a shitty waifu. 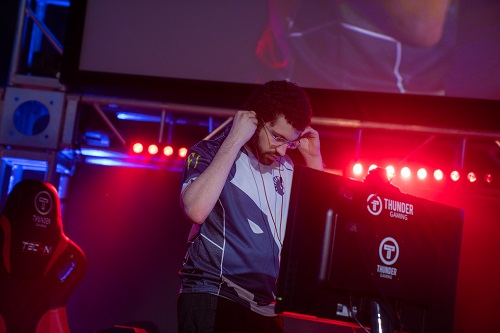 Now, at Team Liquid we pride ourselves on Pride. So we have tackle the other side of this. Who’s the best Husbando?

I feel like there’re a couple that are cheating. Like there’s Astolfo from the Fates series, but Astolfo’s basically a waifu. Same with Felix from Re: Zero. Ah, this isn’t anime but 9S from Nier is a cinnamon roll. He is an absolute pure cinnamon roll who deserves love and affection.

That game is basically an anime. 9-S is pretty solid but can you think of anyone from a pure anime?

Oh, remember that giant guy from Kill La Kill? Ira Gamagori! He’s actually the perfect husbando. He attacc, he protecc, he is seriously good at what he does but he also gets extremely embarrassed and it’s super adorable. He tries to hide his caring side but he can’t!

Who’s the most overrated husbando?

Astolfo. I feel like they designed a girl and said, “oh by the way it’s a guy.” So it fails the husbando test. I like cute characters period. Guy or Girl. But if my husbando’s gonna be a husbando, people have to actually recognize, yeah this is a male character.

I get that. You want the true Husbando experience.

Moe or Shonen. You can only pick one, the other will be destroyed forever: Which do you pick and why?

That’s what I thought [laughter]. Is Avatar the Last Airbender an anime? 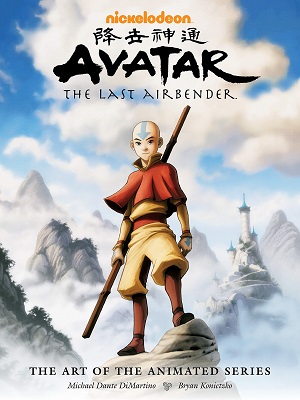 Of the top Smash Ultimate players, who’s the biggest weaboo?

It’s either Cosmos or me. We’d have to have a weaboo off to determine who is a bigger weab.

That’s the next Summit event. You get final say in the production of an anime about professional Smash. You can make the anime about whatever you want, any player, any game, any period. It could be historical or fictional. What does your Smash anime look like?

It’d be the story of Falcomaster. The random guy going to events and trying to be good. Think about Ash, he doesn’t succeed ever, but he’s the spectator for a lot of things. He sees the drama but he doesn’t get involved in it. He sees the tournaments going from grassroots to esports but he’s just there for the ride. He never wins a big tournament, at least not for twenty years like what Pokemon did. And then he goes to play League of Legends and becomes the best player in the world and wins tons of money.