Team Liquid recently placed second at the largest Dota 2 event of the year, The International. They made an incredible run through the lower bracket to reach the grand finals, the likes of which have never been seen. We took a closer look at Liquid’s run to identify what they did differently to achieve such success. There was an immediate stand-out: MinD_ControL’s Dark Seer.

Despite being a standard pick at many TI’s, Dark Seer is very popular; fans and players alike love watching his exciting team fights. This year, though, Liquid’s choice to pick him in the lower bracket of TI9 was anything but standard. It was both brilliant and perplexing. Leading into TI, Dark Seer was widely considered unplayable by the professional community. We saw this in the group stage as Dark Seer was passed over in each and every one of the 72 games played. And yet, Liquid ended up picking the hero three times in the playoffs, winning each and every game. So why would Liquid, in their most important matches of the year, take such a risk?

The answer lies in the concept of a Comfort Hero (also known as a Comfort Pick). The Comfort Hero is a common concept within the Dota 2 community, it is simply any hero that a player has a wealth of experience on. It’s someone that the pro could play and always feel comfortable on. Unfortunately, this definition is a bit vague, so we decided to take a more analytical approach to the concept. We created a simple metric called a Comfort Rating to define what is and isn’t a Comfort Pick. To do this we took a player’s number of pro games on a hero and divided that by the number of times the hero has been picked before in the tournament. Here’s a visual for this equation: 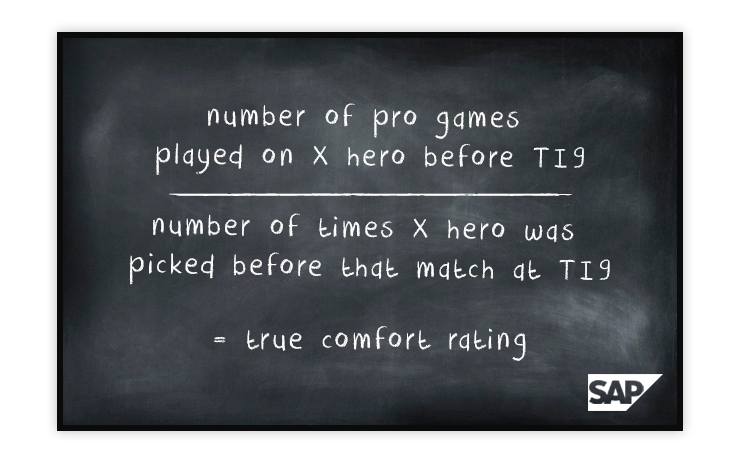 The Comfort Rating is an important metric because it separates meta picks from real comfort picks. While it’s easy to pick your most experienced hero when everyone else is picking them, it’s much harder to take that risk when most teams won’t even consider them. Using the Comfort Rating as our metric, MinD_ControL’s three Dark Seer games ranked as the first, second, and fourth most comfortable picks of the TI9 playoffs. Third place was taken by 9pasha’s Brewmaster pick against PSG.LGD, as he had 53 games on the hero and it had not yet been picked at TI9. 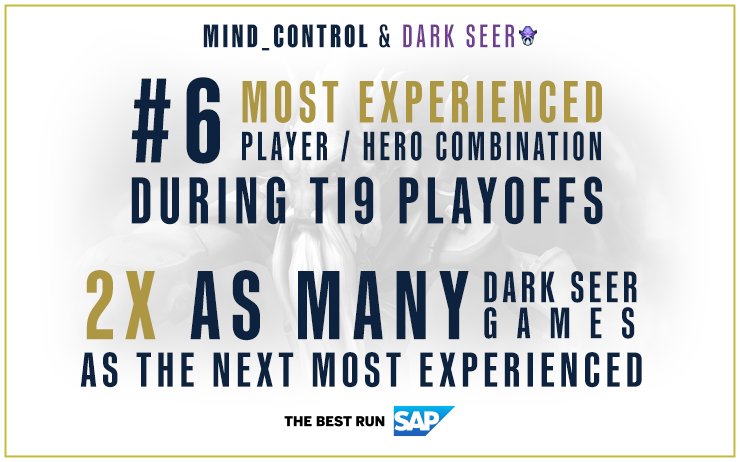 So Dark Seer is clearly a reliable Comfort Pick for Liquid, but why did they choose to pick it when they did? After eschewing him for the entire tournament, what made their match against EG, Dark Seer’s first pick of the tournament, different? The answer is rather straightforward, it doesn’t matter if the whole world thinks something is bad if you can find the one game where it’s good. Liquid didn’t let the meta dictate their picks, instead they chose their own destiny. They had the single best Dark Seer player in the world and if anyone could win with it, it would be him. Liquid went 3-0 with Dark Seer and were so successful with the hero that, after their 3rd win with him, their opponents PSG.LGD attempted to replicate their strategy. Unfortunately for PSG.LGD, Liquid knew exactly how to handle it and they easily took the match, handing Dark Seer his first, and only, loss of the tournament.

So Dark Seer, an almost unplayed hero, finished with a 3-0 record for Liquid. As you’d expect, there was more to it than just picking one of MinD_ControL’s favorite heroes. Liquid did the unthinkable and tailored their entire drafts around a hero that no one else wanted. After all, why would you draft your whole lineup around a bad hero? Liquid showed that in the right hands, with the right setup, any hero can work. In their first Dark Seer draft, Liquid saved MinD_ControL’s hero for their last pick. This allowed them to draft an absolutely incredible Dark Seer lineup that included Rubick, Elder Titan, Alchemist, and Ember Spirit. All of these heroes synergize with Dark Seer and normally he would have been an easy ban in this situation. Unfortunately for EG, they didn’t think there was any chance of Liquid picking him. Once in-game, EG were left flabbergasted by the Dark Seer pick and Liquid easily took the win.

Kuroky continued this Dark Seer focused drafting in their other Dark Seer games as well, always making sure to enable MinD_ControL as much as possible. The drafting and game results highlight the differences between how Liquid approached using Dark Seer and how PSG.LGD failed to fully utilize the hero. MinD_ControL was set up perfectly and had 3 strong performances, whereas Chalice’s Dark Seer seriously under-performed in an elimination game.

Liquid’s resiliency and decision to carve their path rather than following the meta has clearly worked well for them. They found similar success with other Comfort Heroes and Pocket Strategies in their lower bracket run, winning games with w33’s Meepo, Miracle’s Anti-Mage, and MinD_ControL’s Night Stalker (another hero that was unplayed before Liquid picked it). Both their TI9 run and their TI7-winning run show many similar traits with hero selection. It doesn’t matter if it’s picking completely unplayed heroes or just picking your favorite ones because you can, they played the game the way they wanted to. And it worked.

The old Team Liquid roster made excellent use of SAP’s statistical support, so we’re eager to see what new ideas iNSaNiA and his crew will have for how to use SAP’s technology in the future. The first big challenge will be the Chengdu Major