Meet John Patterson. He’s our new Chief Financial Officer and he’s here to improve our revenue structure as we continue to grow in the esports industry. Basically, John is going to bring in the moolah in brand new ways.

While John’s new to the esports industry, he’s not new to building infrastructures in emerging markets. He has over 15 years of financial management experience, most of which was spent in the digital media industry back when YouTube was basically all Numa Numa guy and Keyboard Cat. Esports is basically in that Leave Brittany Alone phase right now, and John knows it’ll only get bigger. 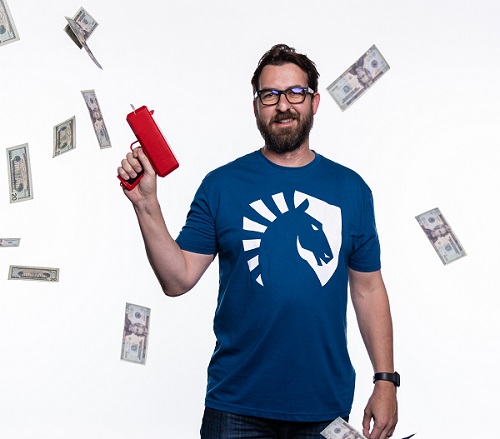 How do you feel about transition into the esports industry?
I feel good about it. I’ve been a casual observer of the esports industry from a distance. My brother is a huge League of Legends fan. He introduced me to this world, back when Team SoloMid was having their run a few years ago. The esports industry sort of fascinated me. It’s something that’s right on the cusp of being really huge. So I’m excited to be a part of the industry and part of this team, right when it’s hitting that tipping point.

What does it mean to be a part of Team Liquid during this important time within the esports industry?
I know TL has built an amazing track record over the past few years, especially with League of Legends wins and the incredible success of their CSGO team. It’s exciting to be a part of what is easily considered the number one franchise in the esports industry. That’s super exciting. What I want to do is take that set of expectations of being the top, and apply that to some of the infrastructure to help build the company to scale, reaping the benefits of that standing.

What was your impression of the Team Liquid staff?
I didn’t have a lot of TL knowledge, but I got to meet both Steve and Victor [our co-CEOs]. Getting to know those guys in particular… They’re both very impressive. Very smart and intelligent guys. I think that was really a selling point for me. Hearing about their vision, how they built the Liquipedia community. How all the teams came together. It’s a really interesting story. It’s been very powerful. I can feel their passion and see their vision for what they want this to become. And it’s very exciting to be a part of it.

What is your goal as CFO of Team Liquid?
A lot of this is about taking the company and building it to scale. The basic goals are to bring in more revenue. Right now, TL relies on outside investment. We want to build a company that is self-sufficient. Over the next couple of years, I want to help support Victor and Steve in terms of bringing in new revenue opportunities and growing the revenue base at Team Liquid.

Right now, my focus is on learning all the different aspects of the business. I want to get to know as many people as I can, including department heads and stakeholders. I’m seeing where there are opportunities to organize the business a little better. I’m looking to take advantage of growth opportunities.

These are things TL is getting into, but let’s put fuel on the fire and take it to another level.

How did you get into gaming?
Growing up, I played a lot of games as a kid. I was a casual gamer, but I grew up playing everything from Street Fighter and Double Dribble to all the Mario games with my brother. We moved to PC games when it became more popular.

What are some current games you play or follow?
Certainly League of Legends. I didn’t necessarily have interest in CSGO until I got here. I got sucked in by the team’s success a little bit. That’s been interesting. I’m excited to dip into the whole run of games and teams that are here. But LoL is what I’m most familiar with.

Will you be playing Smash with some of the TL staff at the AWTF?
I’d get destroyed, but I’m here for it!

Have you tried Manny’s food yet?
I have. It’s amazing. What a perk, man!

After watching League of Legends all these years, are you excited to meet the players?
Those guys are all getting ready for Worlds so I haven’t met those guys yet, but I was at the semi-finals and saw that match against Clutch Gaming live. That was super exciting. It was fun to see. Everyone was expecting Team Liquid to blow them away. But Clutch gave them a super exciting match. It was fun to be there and see it in person.

Was that your first time watching a League of Legends game in person?
I’ve watched a bunch of LoL stuff with my brother, the live streams. But that was the first one I saw [in person]. It was a great introduction to the live events. It got kind kind of crazy near the end.

How was it seeing the esport community’s energy and passion up close, knowing that you’re now a part of this?
I’m a big sports fan in general. I follow the NBA and NFL. I played basketball competitively when I was younger. What I noticed was the fandom in esports is just the same. People get really passionate about it. That environment and energy can’t be replicated. You have to be there. Beyond the general acknowledgement of esports as a real fandom, it was that feeling of a real stake. People are on the edge of their seats. For me, when I went, I hadn’t accepted the job yet. It was interesting to still be detached and just witness it all, taking it all in. It was super exciting from that perspective.

You’re new to the esports industry, but not new to financial management. How do you plan to merge these two entities together?
Being part of a company at this stage, you can feel the energy and the youth. Not just how young the staff is, but how young the company is. It’s kind of like Team Liquid is going through puberty. It’s a bad analogy, but the company is growing up. For me, I’m excited about applying the passion and culture and excitement - really keeping that energy - while at the same time putting things in place to grow the company. Finding the balance and being a part of that process is super exciting.

When you’re not working, what are your hobbies?
I have a little five year old girl who started kindergarten. Most of my hobbies are all centered around her right now. But I like to stay active, I like to play basketball. I’m a big music fan. I like going to a lot of concerts. It’s always fun to go to live sporting events. I’m hoping to go to more esports matches around Los Angeles.

If your daughter wanted to get into gaming, what is the video game you’d introduce her to?
The things that come to mind are getting her into single player games, things with a story. Something with some adventure. That’s the stuff I grew up with. Legend of Zelda had a big influence on my childhood, so that’s probably where I’d start.