If there’s a tournament that belongs to Hungrybox, it’s CEO. It takes place in his region, Orlando, central Florida, and it’s an event he’s done historically well at. How well, you ask? Well, his win at CEO 2019 was his fourth in a row, and his sixth total. This year’s CEO was more than just another championship belt for Hungrybox. CEO 2019 was big for Hbox for three reasons: Commentary, competition, and careers.

There’s no Top 8 like CEO’s Top 8. Players in the Top 8 get a full WWE-style entrance, walking up to a wrestling ring accompanied by music - and sometimes a posse and props. Naturally, commentating for an event like this is no small honor. You want a strong commentator that can bring the hype, while also analyzing the strengths of the competitors.

It speaks to Hungrybox’s reputation as a great commentator that he got chosen. Commentating Ultimate at CEO 2019 was a particularly big moment. CEO 2019 put Ultimate at the primetime slot. The got the 7 PM, Sunday night fight slot that would close out an entire tournament full of the world’s top fighting games. On top of that, CEO was stacked with big names and high profile competitors in Ultimate - including some of Europe and Japan’s best.

Hungrybox was commentating one of Ultimate’s biggest and flashiest tournaments alongside another Smash legend, Zero. And he commentated well. He brought hype and humor to the event that commentators, pros, and casual fans appreciated. He received praise for his strength as a commentator but also for improving and for matching his co-commentator.

Now let’s talk competition and Melee. At the start of 2019, it looked like the year belonged to Hungrybox. He went on a win streak that lasted from the start of September 2018 to the end of April 2019. That’s nine gold medals in a row, enough to put him at an uncontested top 1 in every seeding, making him seem untouchable.

However, the Melee scene is nothing if not adaptive. One of the longest living esports titles in the world, Melee is home to players that have spent their entire lives as competitors and know the grind like it’s family. Around the middle of the year, a number of top players had practiced up so that they could match the man they would inevitably face in Top 8: Hungrybox.

In May, the field started to adapt and the winds began to turn against Hbox. Armada started giving out his notes on Hbox to other top players. More players picked up Puff, giving wider practice opportunities to the best Melee players. The hype around Ultimate quieted a little, and some top Melee players shifted their priorities back to the game that made them. In other words, the competition got tougher.

In May and June, Hungrybox would take his first losses since the end of August, getting 2nd at Come to Papa 3, 5th at Get on my Level, 2nd at Smash N’ Splash, and 5th at Summit. The godliest of the gods had bled. At CEO, it would be up to him to show that he was still the uncontested number one player of 2019. And he’d have to do it by beating his biggest challenger for the top spot - Wizzrobe.

Wizzrobe is an historically great player. He’s the only Captain Falcon main to win a major event with his character, and he’s the player Falcon has long deserved but never had. Captain Falcon is a flashy character by design, so he lures in flashy players. Unlike Scar, S2J, or N0ne, Wizzy isn’t that flashy player. He’s ruthlessly analytical, incredibly technical, and almost robotic in his style. That makes him a major threat for Hbox.

Unlike flashier, riskier players, Wizzy plays a tight defense that doesn’t give Hbox a lot of easy windows to get early kills. At the same time, he doesn’t often lose his focus in the matchup either. Melee is a mental game where even top competitors will die so fast and over so little that it just doesn’t seem fair. Hungrybox is the best in the business at forcing players to make mistakes and then taking everything off that mistake. Meanwhile, Wizzy doesn’t make many mistakes and doesn’t fall out of the zone.

The battle between Wizzrobe and Hungrybox would basically determine who would have the #1 spot and seed for a while to come. It came down to Grand Finals, five games. Hungrybox won in a tense last stock scenario where he caught Wizzy coming down to a lower platform and carried him off the stage. The ensuing pop off would be one to rival Wizzrobe’s from Smash N’ Splash 5. And definitely one for the memes.

It’s hard to trump Hungrybox defending his title at what is literally a WWE-themed event, but there is something even more important than the win. After the dust had settled on the event, Hungrybox announced that he would quit his engineering job and go full-time in esports. 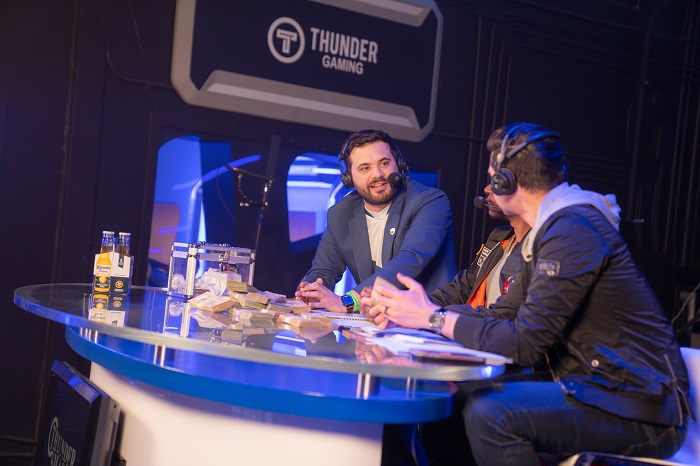 For a lot of games, this wouldn’t be a big deal. Plenty of MOBA or CS:GO players have been playing full-time for years. However, Smash players simply don’t have this luxury. It’s often said, but not always completely understood: It’s difficult to make a living off of Smash alone. It’s not difficult in the esports as a whole, like with League or Dota or Fortnite, where players have to train consistently and devote themselves to a stressful life of competition.

It’s difficult in an advanced sense where not being one of the absolute best players means not making money off tournaments. Imagine the difficulty of making top 16 in a tournament full of players who’ve been getting top 8’s at tournaments since they were pre-teens. Now, imagine getting 7th at a major tournament, and not getting enough to cover the plane ticket back home. That’s the very real situation professional Smash players can face. To make it possible at all, many players and commentators take on other jobs.

Even as a top player, Hungrybox going full-time into Melee is a big deal. It takes a diverse grind of not just practicing for tournaments, but streaming, making video content, and commentating. Even with that diverse grind and established talent and presence, it can still be risky. For Hungrybox, that risk is worth taking, and maybe even necessary for staying number 1. It’s not just streaming, interacting with fans, creating content, and commentating. It’s preparing for a field of hungry, adaptive competitors in one of the world’s biggest and most brutal esports.