Windranger is a hero that has completely fallen out of the professional scene. At the Epicenter Major nearly every team refused to pick her. Normally, her pick rate would have dropped to zero, but she ended up seeing far more play than expected. This was thanks to Team Liquid picking her eight times at the Major.

Now, this is a rare occurrence. It’s not often that a team can pick a hero considered completely unplayable and still find success with it. Well, how successful was it actually? Let’s take a quick look at w33’s stats on Windranger from the Epicenter Major. 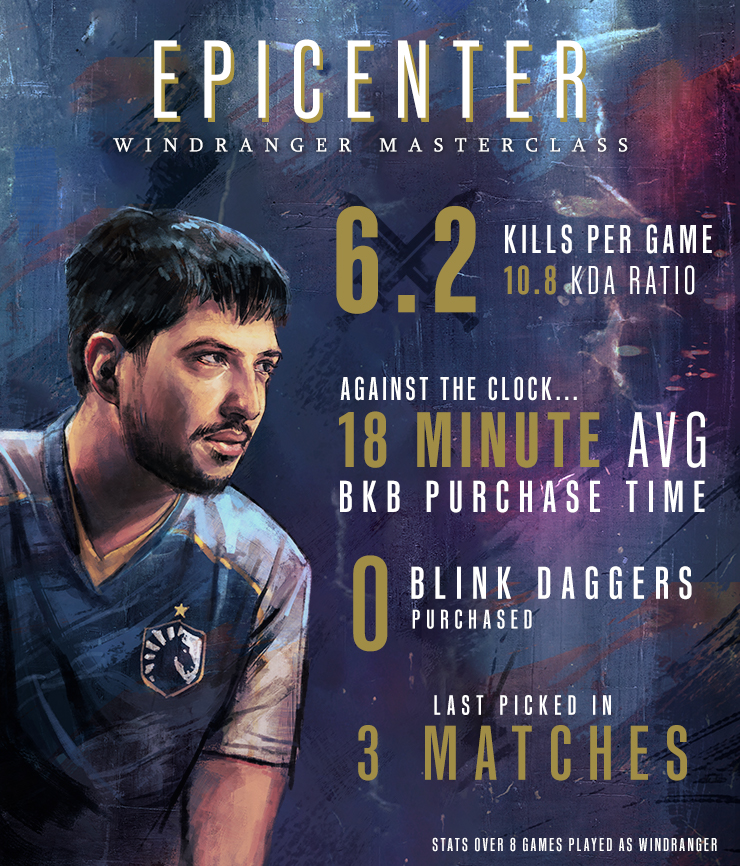 As you can see from w33’s stats, he brings everything you’d want from a fighting, space-making mid player. He avoids taking too much farm from Miracle- while finding pick offs and rarely dying. So if w33 can bring solid stats on Windranger, why aren’t other players even willing to try? The answer may lie in one of the most skill-intensive abilities in the game, Windranger’s Shackleshot. If w33 is able to consistently get the most out of this ability, it would clearly show why he continues to find success with the hero.

Shackleshot looks fairly simple, but it is actually one of the most complex abilities in Dota 2. In short, Shackleshot attempts to latch one target (the Primary Target) to another (the Secondary Target), disabling both of them for the duration. If the shackle fails to find a Secondary Target, then the Primary Target is only stunned for 0.75 seconds, but if it is successful then both targets are stunned for up to 3.8 seconds! For reference, most stuns fall around the 2 second duration and some ultimate abilities such as Beastmaster’s Primal Roar lasts for three to four seconds on a single target. This very high upside means that the spell must be difficult to use perfectly, as otherwise it would be severely imbalanced.

With the general idea covered, let’s look at the exact details of the spell and what makes it so difficult to use well. This unique spell shackles a target unit to any unit or tree up to 575 units away, searching an area of up to 23 degrees one either side of the unit. The image below visualizes and explains the logic behind the spell. 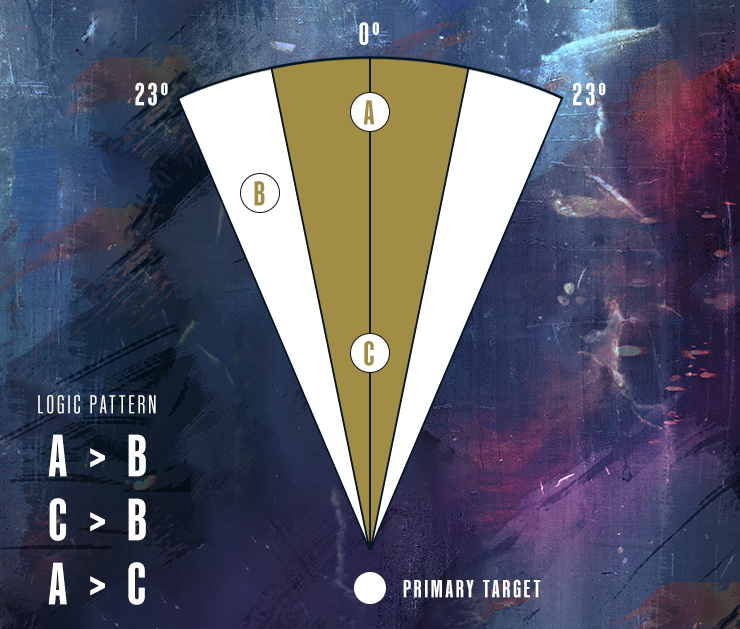 Note: The centerline distance of shackleshot, 575 units, is close to the most common attack range of all ranged heroes in Dota.

1) Shackleshot can latch to creeps, enemy heroes, or trees. While it does prioritize creeps and heroes over trees, it does not prioritize heroes over creeps. This can make hitting a hero near other creeps particularly difficult.

3) If multiple Secondary Targets are at the same effective angle, the unit that is farthest away takes highest priority.

So, as you can see, there’s a bit to unpack here. First, let’s look at the area that Shackleshot searches for a Secondary Target. Shackleshot’s average length and modest angle creates a thin, triangular Search Area. Meanwhile, most skillshots use either a straight line or a circular area when checking for targets. This means that a circular spell like Leshrac’s Split Earth, often considered to have a small Area of Effect, is still larger than Windranger’s Shackleshot. It looks even worse when compared to large Area of Effect spells. The Search Area for Shackleshot is less than 23% of the total area of Faceless Void’s Chronosphere, a spell with a radius of 450 units.

Clearly the size is an impediment, but what about the shape? The most important aspect of this triangular shape is how small the area is near the Primary Target. In most cases, if Windranger is being attacked by two melee heroes, it will be nearly impossible to shackle them together because of how close they are. A similar scenario occurred in Liquid’s match vs EG, where w33 manages to split the wickets and fails to latch his shackle.

Finally, the most misunderstood aspect of Shackleshot. The Order of Priority. It is this aspect, combined with the triangular Search area of the ability, that make Shackleshot one of the most difficult abilities to use properly. Thinking about the Order of Priority leads one to realize that the “large” width at the end of the shackle is a false hope for anything but latching the Primary Target. When w33 tries to shackle two heroes together, or shackle a hero as the Secondary Target, his Effective Search Area becomes incredibly thin. This makes small adjustments before firing a shackleshot absolutely critical. 50 units can make the difference between missing the shackle, latching to another unit, or landing a 2-Hero shackle. This is why, historically, Blink Dagger has been such a common pick up on Windranger. It helped ease the burden presented by the difficulty of Shackleshot, allowing a Windranger player to simply blink to the correct angle to land the shackle. We saw earlier that w33 never purchased Blink Dagger, meaning that he relies solely on Windrun to reposition himself.

With all this difficulty in mind, it’s finally time for the statistics behind w33’s Shackleshots. 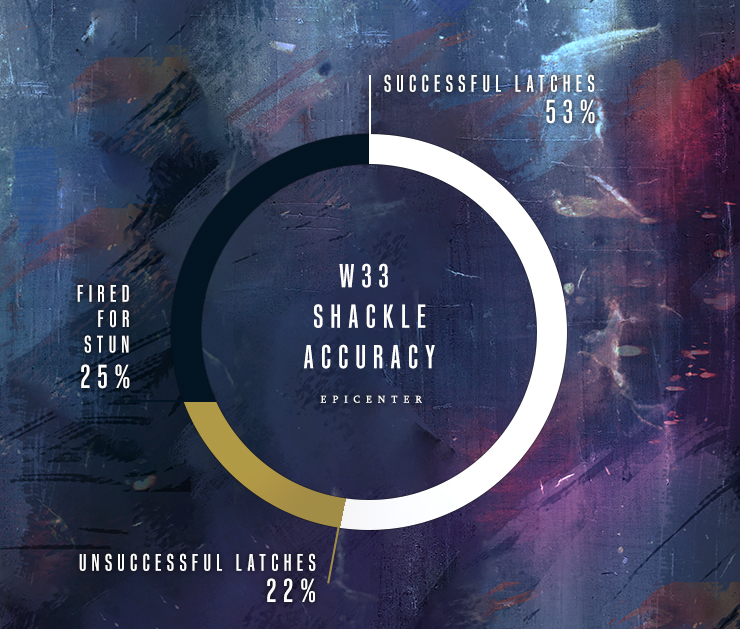 Based on these statistics and the difficulty ascribed to Shackleshot, it’s safe to say that these numbers would present a baseline for what is necessary to play Windranger in the current professional scene. w33 has changed the focus of the hero. Rather than building his items around Shackleshot and attempting to only land the best possible shackles, he instead focuses on damage output while compensating for his lack of movement items with Windrun. w33 would rather land over 50% of his shackles and kill the target every time than build blink dagger and land over 70% of shackles but miss out on kills. It is possible to throw the best possible Shackleshot that any person could, and still miss. Here is a prime example of w33 doing exactly that:

Most players will look at that and cry out “How did that not shackle?!” Here’s an image for a closer look: 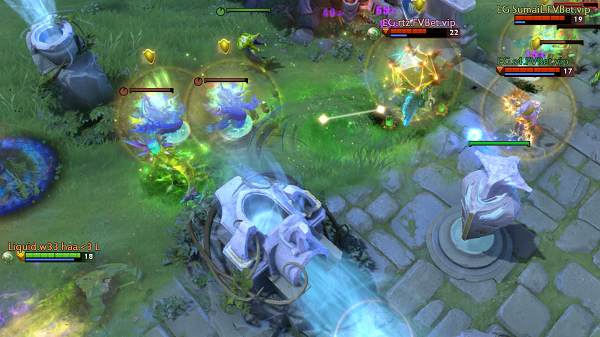 Now, w33 shot the best possible shackle he could have here, he looked to catch two cores to give Liquid a fighting chance where otherwise they would have none. It looks like the shackle will hit the mark perfectly as Morphling is lined up with Sven and must be near the edge of the Shackleshot’s Search Area. Unfortunately, that red health bar you see in the top right is a creep that is standing just behind Morphling. That creep tanks the shackle for him, allowing Morphling to just walk away. There are few things more difficult in Dota 2 than landing a 2-Hero shackle. Had w33 built a blink dagger this game and used it here to try to line up the shackle, the outcome would have been the exact same.

Now for the icing on the cake that makes w33’s over 50% latch rate impressive. The primary focus so far has been the mechanical aspects of successfully latching a Shackleshot. Now it’s time to consider the opposing players. Shackleshot is an average-speed projectile, meaning that most professional players can disjoint it (to disjoint means to use a movement ability while a projectile is in the air, causing the player to dodge the incoming projectile). This was most apparent in Liquid’s match against PSG.LGD, where 20% of w33’s shackles were successfully disjointed. In the case of Ame’s Ember Spirit, he was able to successfully disjoint Shackleshot in multiple consecutive teamfights, allowing him to live in situations where a successful shackle would mean death. Even still, w33 put on an impressive performance against PSG.LGD, drawing the attention of the Chinese squad from Miracle- to himself.

Looking at all of this together, it makes w33’s performances on Windranger all the more impressive. On a hero where a middling performance would be considered good, he was able to completely take over several games. Thanks to his domination of the midgame, Liquid were able to finish several games in close to 20 minutes. This lead to situations where the hero that would otherwise be completely ignored was now forced to be banned in do-or-die situations. In the grand finals of Epicenter, when Vici Gaming was one game away from winning the tournament, they chose to ban Windranger using their final ban. Some players earn respect bans for their strongest heroes - only one player commands such respect for his Windranger.