No Olimar No Problem

Olimar. Whether you love him or hate him, if you play and watch Ultimate you definitely know him. Since Nintendo nerfed him hard in Patch 3.1, you might not see him as often.

While some Ultimate fans are busy celebrating, here at Team Liquid we’re naturally a little sad. After all, Dabuz is one of Ultimate’s biggest Olimar mains. If you’ve just learned about Dabuz, you might think he’s just a top player fishing for a powerful character. But if you’ve known this competitor for a while then you know he’s an Olimar diehard who’s been playing the character since the Brawl days.

In fact, Dabuz’s Olimar history goes even deeper. When I asked him about some of the favorite moments he’s had playing the character, he jumped right into the story of how he first played Pikmin and got into competitive Smash. Dabuz’s older brother got Pikmin 1 from Blockbuster - RIP Olimar and Blockbuster - and told him that he had to try it. Dabuz instantly loved it, beat it, rented it again, beat it again, then bought it so he could keep beating it.

Dabuz’s excitement is contagious and speaks to feelings a lot of people in the Gamecube generation had not just for Pikmin, but for Brawl too. “One day, I go into the Smash Brothers Dojo for Brawl and they were like, ‘new character revealed: Olimar. You should've seen my face. I was flipping out.”

Who needs Joker or Bayo or Banjo or even Cloud when you’ve got Captain Olimar? At least, that was how the thinking went for Dabuz. For all of us who refreshed the Brawl Dojo every day, we can probably remember a time when we felt the same, whether it was the reveal for Sonic, Snake, or Ike.

“I’m gonna play him, he’s my favorite character, I’m gonna main him now for sure,” Dabuz said, running through his thought process at the time. Years removed, Dabuz was still radiating the raw hype he felt for the character. “Before I knew anything about competitive play, tiers, or anything - when I thought tiers didn’t exist (that was the meme back then) - I was just gonna main Olimar. When I got to play Smash, first thing I did - play Olimar. Then I sucked with him! I was awful with him! I remember I would try to fight people by using his tilts. I would throw my Pikmin away and forward tilt people in neutral.” 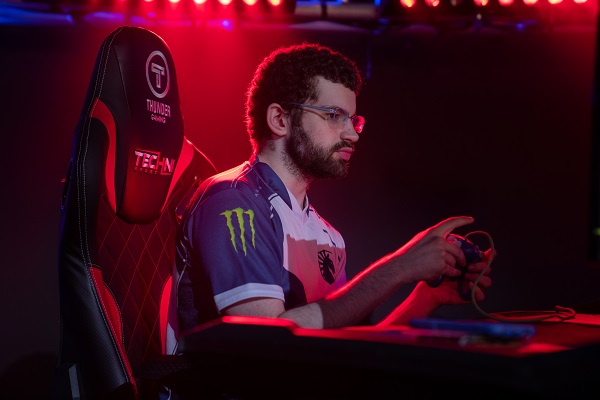 Obviously, the story doesn’t end there. Dabuz went on to talk about how he got good.

“There were players in New York, actually, who were destroying people with Olimar. And I was watching them and I was like, ‘Oh my God, this is what they do with Olimar! Let me just copy them.’ Then, I fought one of them on wifi and I beat them in the ditto. Nowadays, I know it’s wifi, ‘who gives a shit?’ but for my 14 year old self, beating someone who I was looking up to and studying… That was like the best experience with Olimar.”

Dabuz remembers the moment vividly, to the point that he gives his Olimar mentors their due right after. “Shout outs to the players that I watched, specifically AndyG and Black Waltz. AndyG was the player who I beat in the gamebattles ladder [ranked online match], and he was considered the best Olimar player in America pretty much until I came around.”

And Dabuz earned that top Olimar title through more than just online results. Some Smash fans might have missed his name, but he’s been a top 10 player for a long time and regularly got top 8 finishes at big Brawl tournaments. Whether it’s Brawl, Smash 4, or Ultimate, Dabuz is a fixture in Smash’s competitive scene.

And he’s not going anywhere.

It’s easy to think Dabuz would fall off with Olimar getting hit by the nerf bat, but he’s still making it top 8’s in tournaments. At Paramount, a tournament that took place earlier this month, Dabuz got to second place using Palutena and Rosalina. To do it, he had to take down tough competition, such as Samsora and Ally. When I asked Dabuz about who he would main next, he was unsure but unworried.

“I’m not quite sure what I’m doing. I think the only character that’s definitely in the lineup is Palutena cause she’s a really good game 1 character for anyone.”

While the conventional logic holds that high tier characters perform better, thus far Dabuz’s take is looking galaxy-brained. Rosalina was crucial to Dabuz’s success at Paramount. Despite maintaining his results without Olimar, it still feels surprising to hear that Dabuz is mostly done with the captain, if only because he loves the Pikmin franchise so much.

However, Olimar in Pikmin and Olimar in Ultimate are two different beasts. When talking about where Olimar would fit in his gameplan, Dabuz admitted something surprising.

“I don’t enjoy playing Olimar in game that much,” he said. “I think when you play the matchup correctly, the matchup’s basically you run away from them like they’re a heavyweight. It’s really frustrating to play against people who do that and even in practice it’s not fun at all to play him a lot of times.”

While it wasn’t surprising to hear that Olimar was unfun to play against, it was surprising to hear he wasn’t fun to play as. After all, winning tends to look fun and Dabuz won a lot of sets with Olimar. There is absolutely something enticing about the way Olimar wins too. Olimar can punish aggression while also easily dying to it. He is the game’s ranged glass cannon, being one of Ultimate’s lightest characters and highest damage dealers. Many of his high level matches go down to the wire and aren’t over until the victory animations load.

It was also surprising because playing Olimar immediately makes you a heel. And if there’s any player that can take the heat of being a heel, it’s Dabuz. If there’s anything to learn about Dabuz from this interview, it’s that he’s a pretty positive guy. With nerfs this heavy, I expected the interview to feel like a wake. Nothing could’ve been further from the case. Dabuz was happy to talk about his past with Olimar. Even though the nerfs hit hard, they didn’t dampen any of the joy the character had already brought him.

That kind of positivity really helps with being the heel. When he was demolishing Wizzrobe at Smash N’ Splash 5 and the crowd began chanting 3.1, he stood up, turned his ear to the crowd, and asked for more.

In fact, despite the end of Olimar and the oncoming search for new mains, Dabuz seemed most uncertain about how he’d handle finally being the hero.

“I-I-I I’m not ready for this! I don’t know how I feel about this…” He was playing it up a little, but for a small moment he sounded genuinely a little uncertain. Then, in a swift moment, the positivity returned. “It might just be wonderful!”