Without any goals left to fulfill, one of the Five Gods had decided it was getting too lonely at the top to feel any motivation. When Armada announced his retirement from singles, citing dread before tourneys as the leading cause, the Melee community was devastated. This included one of his long-time rivals, our very own Hungrybox.

Taking to Twitter, Hungrybox said, “It’s difficult for someone to look at their rival and also see someone that inspires them, but I feel I can share that now. [...] In my own desire to want to be the best, my main course was to follow the work ethic he put in. [...] Armada was always by far the most difficult and challenging competitor I’ve ever faced. I’m sorry I couldn’t have given you a better final set at Smash Con. I still have a lot to learn from you about mentality.”

Since Armada’s early Young Link days, Hungrybox had made it a very obvious goal of his to out-strategize Armada. In 2011 he picked Young Link himself, a futile effort to counterpick his long-time rival. It wasn’t until Evo 2014 that Hungrybox would defeat Armada’s Young Link. This caused Armada to change paths himself, using Fox in a frenzied attempt at dethroning Hbox’s Jigglypuff in 2015. It was this methodical back and forth that kept the Melee invested in the good-natured rivalry up until Evo 2018. 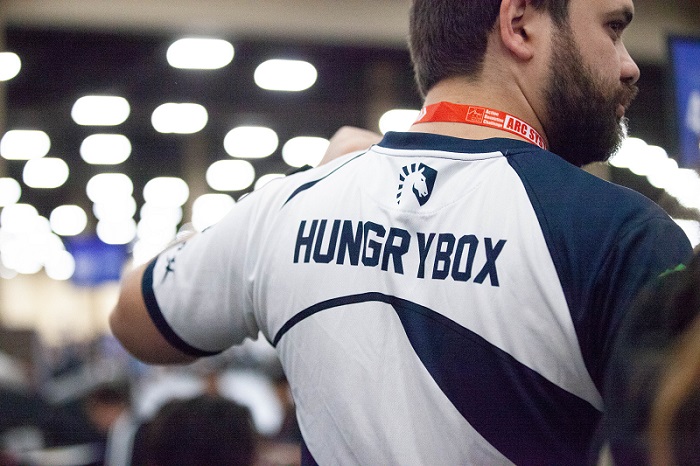 Up on the stage, lights illuminating his pained grimace, Hungrybox reluctantly accepted fourth place. His disappointment was not able to be masked: This was not how it was supposed to go. He wasn’t supposed to lose to Armada like this.

Yet it wasn’t losing to his long-time rival that had affected Hungrybox’s mental state.

There’s not a lot of things that could be considered worse than having a wrist injury going into one of the largest Melee tournaments of the year. But Hungrybox was about to discover that there was somehow even worse to come.

After posting about his wrist before Evo 2018, Hungrybox saw some tweets that completely fucked with his mind: Multiple people rooting for his demise, cheering about the injury, hoping that it would make him lose. Just underneath Hbox’s photo of his bandaged wrist read a much-echoed tweet: This is good for Melee.

It was becoming clear that Hungrybox’s biggest rival wasn’t Armada after all. It was the Melee community.

After the fourth place at Evo 2018, then a third place finish at Smash Con the following weekend, it was becoming evident that Hungrybox wasn’t focused. His long-time best friend and coach, Crunch, told me that the “toxic environment” was starting to get to Hungrybox.

“It’s very hard to play if you have things distracting you from the game itself,” he explained in a recent interview. “If you have animosity from the community behind you or the players next to you. When you don’t feel welcome anymore.”

On August 12 (the same day as Smash Con), Hungrybox tweeted out: “Fuck this community, man. All you guys ever do is look for ways to give me shit over any tiny thing. All 12 years of me playing Melee has been full of it. I’m literally mocked by my peers, my competitors, and community figureheads on a daily basis. Like what’s the point anymore.”

Most of the mockery Hungrybox referenced was not said directly to his face, but over social media. That’s where most of the Smash community’s biggest rivalries have taken place. From Twitter and Facebook, to Reddit and Youtube, it’s hard to escape the constant bickering and trolling that surrounds - and defines - the Smash community as a whole.

“Beating Hbox is probably more satisfying than getting first.”

Those are the top three comments on the video showing Armada and Hbox’s top 8 match at Evo 218. It wasn’t about the matches themselves. Their techniques. No. It was just bullying.

“The majority of Melee fans feel the same way,” responded one user to the last comment mentioned above.

It was becoming evident that Hungrybox was losing his rivalry with the Melee community, especially on Twitter, a site that Crunch has denounced and deleted after seeing the toxicity firsthand. It seemed like they would defeat him once and for all, one cruel remark at a time, spurred on by competitors in the scene who echoed their sentiments.

Seeing all of the unwarranted negativity, Team Liquid staff surprised Hungrybox with a specially made printed booklet full of messages from fans and loved ones, “to remind me of the reason I play,” said Hungrybox on Twitter. It may have seemed like a small gesture, but Crunch told me earlier “all it takes is one homie” cheering you on to make all the difference. 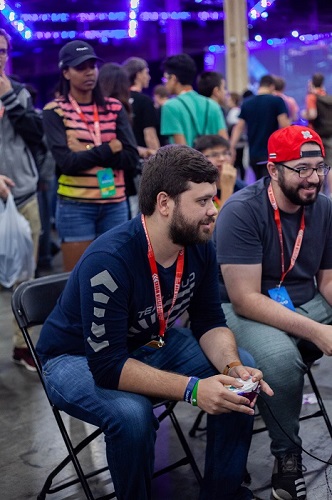 Hungrybox’s mental state improved and he went on to take first at The Big House 8 and Smash Summit 7 (along with countless other tournaments each weekend). Recently, Hbox was victorious at Pound 2019, defeating crowd favorite Mango. In response, an audience member threw a dead crab at Hungrybox, just missing his head.

Even though it was an emotional and heated moment at the time, Hungrybox later joked about the incident on his stream. He even got “revenge” on the crab by eating one of its brethren. Still, the moment was proof that despite Hbox’s epic comeback this past year, his rivalry with the community will never end. Especially not if he keeps winning. And not with social media around to fuel it.

Social media has fed into Melee rivalries since for-fucking-ever. One of the most iconic Smash rivalries of all time all started on Twitch.

Back in 2014, Chillindude was brainstorming ways to get his Twitch stream viewers hyped for his January 2015 money match versus Leffen at Apex 2015’s Salty Suite. To incorporate Melee’s beef and drama identity, Chillin decided a diss track about Leffen would be a “sick idea.”

“Respect Your Elders,” uploaded to YouTube on January 30, became the most viewed Melee content on the internet, with over 1 million views.

In a recent interview with Chillindude, I had Chillin dissect some of the most quoted lines in the rap, revealing the bitter rivalry between Chillin and Leffen. Any Melee player or fan remembers shouting “You’re not one of the Gods, you’re one of the God awfuls” along with Chillin, the remixd Melee theme song bumping in the background.

“[That line] was my response to that whole conversation” about the Melee community’s discussion on whether Leffen may become one of the Gods during a time period of improvement in 2014.

Of course, Chillin’s humiliating 5-0 defeat at the Salty Suite is just as recognizable as “Respect Your Elders” lyrics. But that wasn’t the beginning or end of their actual rivalry. Outside of the Salty Suite, animosity between the two players had been brewing because of Leffen’s attitude.

Chillindude admitted that he sort of hated the guy back then for his rude remarks and blatant disregard for people’s feelings.

“I was branded pretty early as a villain,” Leffen told Kotaku back in 2015. “In the beginning, I didn’t really care about it, but as time went on, I started realizing that if I am to have a role in the Smash scene, I actually do like the villain role. [...] Since everyone is friends, nobody is really pushing each other - you’re not going to try that hard to beat someone you’re close with.”

So, by that logic, Leffen possibly flung his controller to the ground when he lost to Ice in hopes of giving the guy a reason to improve his Fox game.

Either way, Chillin has since forgiven Leffen after his long-time rival told him he could still play with the vanilla-colored Fox after their whole Salty Suite beef. He has since stated that Leffen has been maturing as a person and has stopped being so toxic.

But other Liquid players may say otherwise.

Remember Hungrybox’s tweet on August 12 after Smash Con? While that tweet was spurred on by years of toxicity from fans and competitors in the Melee scene, it was the community’s herd mentality over Hbox checking his watch in the Loser’s Finals that seemed to set him over the edge.

Leffen’s response was harsh. “Got no sympathy for Hbox,” he tweeted back. “[...] Maybe try just once not to play the victim when you are the one to blame?”

No matter which side you agree with, Crunch said it best when he told me that these arguments should be had in private. Always one to analyze situations logically - like a coach would - Crunch stated that “figureheads of the community have a responsibility to keep the toxicity in the community low and to say certain behaviors are not okay.”

He continued: “There are lots of wonderful class acts in the community, like Armada and Plup, but other people – without naming names – will speak bad about others on a regular basis instead of, like I keep saying, talking to the person about it.”

When it comes to social media, it’s often hard not to fall into the trap of talking shit. With beefing so highly regarded and cultivated in the Smash community, seeing pros publicly argue has become the norm. We’ll let you do your own research on that. 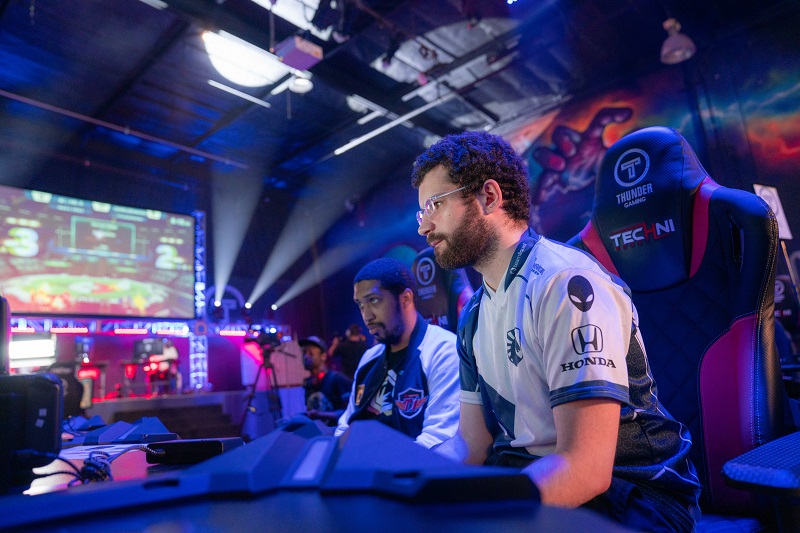 Dabuz is also striving to become the best Ultimate player in New York, where he’s from. His biggest competition is ANTi, a New Yorker known for his Mario mastery.

These healthy rivalries keep Dabuz on his toes and keep him striving to maintain his titles. And they also make for much-anticipated exhilarating matches. But best of all, it’s a source of hope. Hope that Smash players can compete and have rivalries without taking to social media to trash each other. Without throwing dead animals at people they don’t like.

With beef culture constantly celebrated in the Smash community, and competitors gaining followings for their personalities and online personas, it’s clear that the interconnected Smash rivalries will continue on for the eternity of the game’s existence. It’s what keeps the community thriving. It’s what feeds the fan-base. They eat, breath, and shower in the drama (and it may be the only shower they take all year). It’s what keeps Smash relevant.

Seeing threads like “Is it just me or is everything about Hungrybox unlikeable?” will never end, no matter how hurtful they may be.

But through it all, Hungrybox continues to dominate with our support and love. Chillin continues to make ironic diss tracks for our YouTube channel. We love our players. And while you don’t have to, maybe consider not adding to the continued Smash rivalries on social media that make the community toxic. Let’s all try to focus on the game we all love.