Rapha: The GOAT of Quake

March 16 2019
Shane “Rapha” Hendrixson didn’t smile when he was up on stage, holding the trophy for placing first at DreamHack Winter 2018. But that is because his thoughts were already on the future, much like during his games. He is always thinking about what’s next. Rapha was thinking about how this win solidified him as the best Quake player in the world. But he was already thinking about what he would do to maintain that title throughout 2019.

Becoming the GOAT after placing 1st in duels and in 2v2 with partner DaHanG at DreamHack, Rapha had achieved his 2018 goal after a less than pleasing showing throughout the year. A year where he was the second best Quake player in the world.

“I struggled through the year, had a couple losses,” Rapha recalled. “I always tried to play to not lose, rather than play to win. To win, my opponents were pulling off amazing, amazing plays. Well, shit. I just had to tip my hat to them.”

While being second best Quake player in the world wasn’t ideal to Rapha, he remained positive. He never stopped trusting himself and what he had been doing to get to this point. And he kept getting more confident as tournaments went on.

“That struggle was good for me,” he concluded. “Having to rebuild myself was good for me. Being at the top and being chased feels much different than chasing the top.”

That’s why after an entire year of chasing that title of best Quake player in the world, Rapha didn’t smile up on stage. The addrenneline had been coursing through him. He had played at his best. And now he was the best.

“I feel it’s been an honor to play at this level. Pushing after this goal - to be the best at something - is a great experience and something I’ll always cherish. Not many people get to pursue a dream like that. It’s something I’m really thankful for every day.”

First he took DreamHack Denver in 2018. Then DreamHack Winter later that year.

The GOAT had returned.

But where had he gone? Nowhere far, of course. He was second best, after all, not that it was enough. For a whole year DaHanG was the best Quake player in the world, from DreamHack Winter 2017 to the PGL Quake Champions Open in Nov. 2018, based on results (some of which included 2v2 victories with Rapha as his teammate).

DaHanG defeating him in the Quake World Championship 2017: Duel quarter finals cemented their flip-flopped status. But throughout the year leading up to QWC he kept underperforming, despite feeling like he was in good shape. There’s just so many small moments in Quake where you have to be on top of your game, he said, or opportunities will slip by. While he usually takes advantage of opponent’s mistakes, he kept getting outclassed tournament after tournament.

Quake Champions was proving to be quite different from Quake Live. But it would only be a matter of time.

“I don’t go into tournaments thinking about placing Top 8, Top 3,” said Rapha. “I’m always looking to be number one. People either get really down about losing, or turn it into a constructive feeling, fueling you to do better next time. I always try to learn from it and not let it happen again.”

When Quake Champions took over the competitive scene Rapha immediately noticed the drastic differences, not only in the gameplay itself, but the tournament results. The competitive scene had been reset and everyone was fighting to prove themselves all over again. For a bit Clawz was proving to be the best Champions player, but that all crumbled when DaHanG and Rapha knocked him out at DreamHack 2017.

This feeling of being third best, second best - that was new to Rapha, who was considered the best Quake Live player leading up to that point. His biggest rival was Cypher, but nobody could really stop his momentum throughout Quake Live’s competitive life from 2009 to 2017.

“Once it went from Quake 3 to Live, right out of the gate, that’s when everything clicked for me,” he recalled. “I went on a big winning spree. I was on a year-long international LAN winning streak. I was almost always in top 3, and more often than not I was in the finals. That became consistent throughout Quake Live when it came to 1v1.”

Coming out of a Quake 3 LAN win in 2008 at the age of 18, Rapha was practicing Live a lot, but also practicing efficiently. He watched past players closely, combining his own thought process with the strategies he learned from VODs. And his signature playstyle started to become very apparent: He would always adapt to his opponents. And he made very few mistakes.

“I wasn’t super top tier aim-wise,” Rapha admitted, “but what kept me on top was my really good decision making. I had really smart plays that would set me apart. I was constantly applying pressure, and always leaving fights at the right time. I tried to be as annoying as possible: Playing defensively or aggressively, I did whatever was the right play at the time.”

These were the god-like Quake skills Rapha had been chasing all throughout his Quake 3 career. He started playing Quake 3 when he was about 12 years old, introduced to the game by his dad, John. In 2002, his dad brought him to his first competitive experience, Quake Con.

“Maybe he was biased,” Rapha recalled, “but he believed I could do it even before I thought I could.”

His dad saw his potential. He saw his son getting better and better. And his dad would know: He was a skilled Quake 2 and 3 player himself. Rapha recalls his dad loving the game. And for a 40 year old man, he noted, he was “pretty damn good,” especially when it came to Capture the Flag mode. His father loved Quake.

Unfortunately, he passed away before Rapha played at his first Quake Con in 2003. He also wasn’t there to see his son’s first win, in 2009.

“I was so emotional. It was really hard to keep it together on stage,” Rapha said. “It made me think of him a lot. I really tried to push myself to win in his honor.”

Little did Rapha know, that 2009 win was only the beginning. 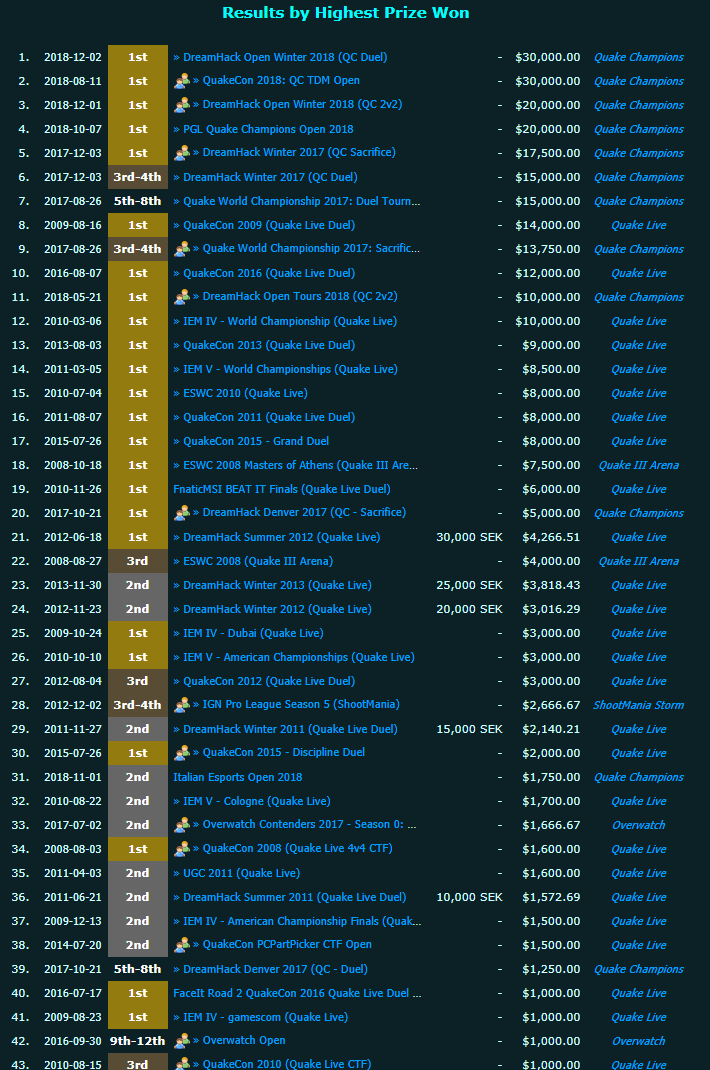 From Esports Earnings. Couldn't even fit an entire page.

He had started playing Quake for fun with his father, fascinated by the game’s competitiveness. How fast-paced the play style was. How it was all about outsmarting and outthinking your opponent. Outskiling them. Rapha had always been a gamer, playing console games with his father and friends. But this was it. This was where he belonged.

You can’t become the GOAT out of nowhere. It all leads back to something, which leads back to something else, which goes back even further. Until you see where it all started. Rapha has the strategy and smarts to defend his title as the best Quake player going into 2019. But he also has the heart. The passion. And it all started with playing Quake 3 side by side with his father on a slow-running computer.