Liquid Takes a Step Back from Halo

December 16 2017
We are sad to announce that we are taking a step back from Halo for the time being. This decision has not come easy, as we were incredibly proud of our team and what we were able to accomplish over the past few years.

However, due to the lack of progress behind the scenes, we've decided to reassess our current involvement until we can gauge the direction of the series. Even though we are leaving the Halo scene, we are still hopeful that it will continue to grow and reach its potential. We would like to thank our fans for supporting us since our debut in Halo and hope that you continue to support our players on their new teams.

During this past year, we were able to accomplish a lot, including a bronze medal in the Halo World Championships. Liquid was always among the contenders, and we were committed to fielding a team that could win titles. While we ultimately fell just short of the mark, we were happy with our performances and results. 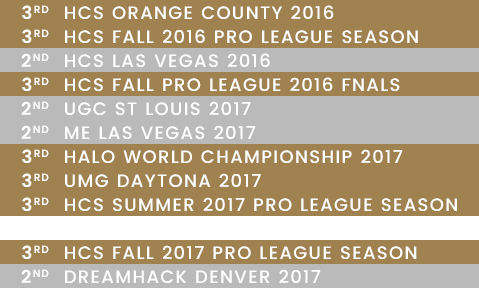 "As someone who started their esports career in first person shooters, Halo held a special place in my heart. Not only because of the game, but because of the players, coaches, and analysts that I had the pleasure of working with. Although Team Liquid had many ups and downs throughout our tenure in Halo, we had a great ending with some fun tournament runs and overall placements. To everyone I have worked with over the years in Halo, thank you."

"Since joining Team Liquid over a year ago, we've had multiple roster changes but we were always considered one of the best Halo 5 teams. We owe a huge thanks to TL for always providing us the tools we've needed to help us improve (especially our analyst Audley). TL has had good run in Halo and I'm honored I was able to contribute to their success."

"It's been an absolute pleasure working as the analyst for Team Liquid throughout their tenure in Halo 5. I've gotten to work with 14 different players all under the Team Liquid banner and although many faces came through TL, they were consistently considered one of the top teams among the league. It's been an honor to contribute to Team Liquid's success in Halo and I wish all the players I've worked with continued success as they move on in their careers."

Our players have found new teams, and we would like to express our sincerest gratitude for their efforts during their time on Team Liquid. They are all talented players and we hope that they find success on their new teams. Eco and StelluR will be heading to Splyce, while Penguin and Spartan will play for Reciprocity.

We'd like to thank our fans for cheering us on and thank the Halo community for making Halo such a vibrant scene. We hope that you will all continue to support Halo so that it can be the game that it deserves to be.

Please log in with your teamliquid.net account to post a comment.
League of Legends | Smash   The Rise of the Resilience Meta Esports is known for burnout - athletes retiring in their mid-20's because they can't keep up. But Coach Bobby and Coach Chung are looking to change all that. They want to see a new world of esports where, as the field grows, so too do the number of veterans within it. By bringing in expertise from traditional sports, from science-based coaching, and from their unique backgrounds, they hope to bring about the Resilience Meta.
League of Legends   Take notes: How TLH is Learning From EG After a shocking 0-3 loss to Evil Geniuses in the Losers Finals of the 2022 Spring Playoffs, Team Liquid’s dressing room is predictably quiet. Quiet enough that, through SQUAD’s camera crew, you can hear the sound of the players’ shoes shuffling against the carpet. After a moment, Liquid head coach André "Guilhoto" Pereira Guilhoto ruptures the silence.
League of Legends   What's Going on With Squad? Six years ago, I was sent to cover the LCS World Championship semi-finals at Madison Square Garden in New York City. Within the bowels of America's foremost sports stadium — where Knicks and Rangers mingle on game days — the rosters of SK Telecom and ROX Tigers prepped for one of the biggest matches of their lives.
Apex Legends   "That’s the Real Version of our Team" Though Team Liquid finished their Apex Legends Global Series Split 2 season on an upswing, climbing to place eighth overall in the North American League, they weren't necessarily the favorites to win it all at the Split 2 Playoffs in Stockholm, Sweden. After all, they were up against 39 squads comprised of the world's very best Apex pros.