Team Liquid: The Road to TI

On October 9th 2015 we announced that the Dota 2 team known as 5Jungz would be joining the Liquid family. Nearly two years later the number of accolades and achievements the team has accomplished with their own blood, sweat, and tears is staggering. One of the few mountains left to climb is the summit of The International. Victory in the biggest single tournament in esports is a feat that has only been accomplished by six teams—with no repeat winners in the history of the game. With victories at StarLadder, Epicenter, and DreamLeague in the run up to TI7, this is Team Liquid’s year. Our stalwart captain KuroKy is one of only four players to have attended every single TI, and he now leads a team that heads to Seattle as favourites.

Team Liquid will be going into TI7 with a unique advantage over their competitors. While teams might focus any single player’s hero pool during the drafting stage, the team has proven that they are comfortable role swapping depending on the strategy that KuroKy and Co. comes up with. That unpredictability gives Liquid an edge from the very start of the match when MATUMBAMAN, Miracle-, and MinD_ContRoL can end up in any lane. Although Liquid was in a similar position during TI6 where they “only” managed to make top 8, the knowledge and experience they gained from that ordeal has been carefully molded and crafted into a weapon aimed at taking the Aegis of Champions.

The past three tournament wins for Liquid have been remarkable, and the stats don’t lie: we dominated. 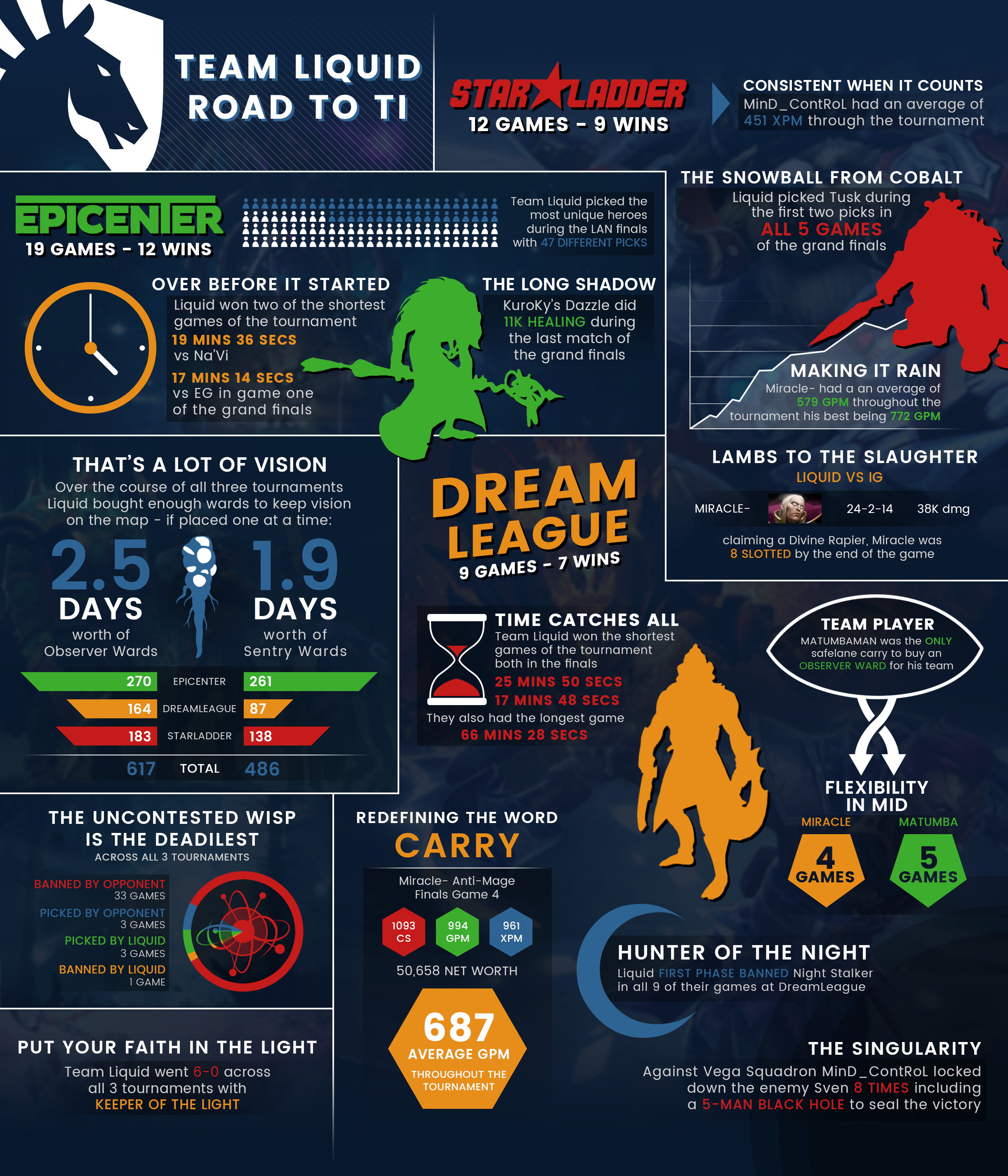 The Best Games
from Our Three Title Defenses

Liquid is indisputably best positioned to do well this TI with three titles defended in the lead up to TI7, overcoming other favourites in the process. If those events were any indication, we will be in for a treat as Liquid plays in front of the crowd at Key Arena. The myriad of strategies and heroes our Dota team has in their arsenal, and the high level of precision that each member of the team possesses, makes many of our best games a sight to behold. Team Liquid turns each match into a work of art, a ballet of buttons and daring maneuvers. There is a reason why neutrals always pay attention to our games, and if you’re a new fan looking for a team to cheer for, then look no further.

While the competition is fierce, Liquid has proven that they are up for the challenge with 5 of the best players the world in their respective positions. Most importantly, the underwater theme for TI7 could be a foreshadowing of the year of Team Liquid.