A Look Inside the Box


As the Pomona, California sky exchanged the sun for a cool dusk, all I had to do was listen.


And listen. And listen some more.


At the tail end of my interview with Juan “Hungrybox” DeBiedma, ranked 2nd among Melee’s pantheon of greatness, I could sense that he wanted to say more. We were pressed for time, since he was already 8 minutes late to his doubles pool for the day, but I knew there was something he wanted to get out.

I wanted to draw out a piece of the real Hungrybox, as raw and unfiltered as he was comfortable with. So to cap off our interview, I asked him a question that practically begged for recourse. At this point, he could ramble on about the weather for all I cared; I just wanted a peek inside the Juan that the cameras don’t capture.

I wanted to let him—not the media, not the fans, not his fellow Smashers—tell his own story, whether that would portray him as a martyr, a villain, or anything in between. 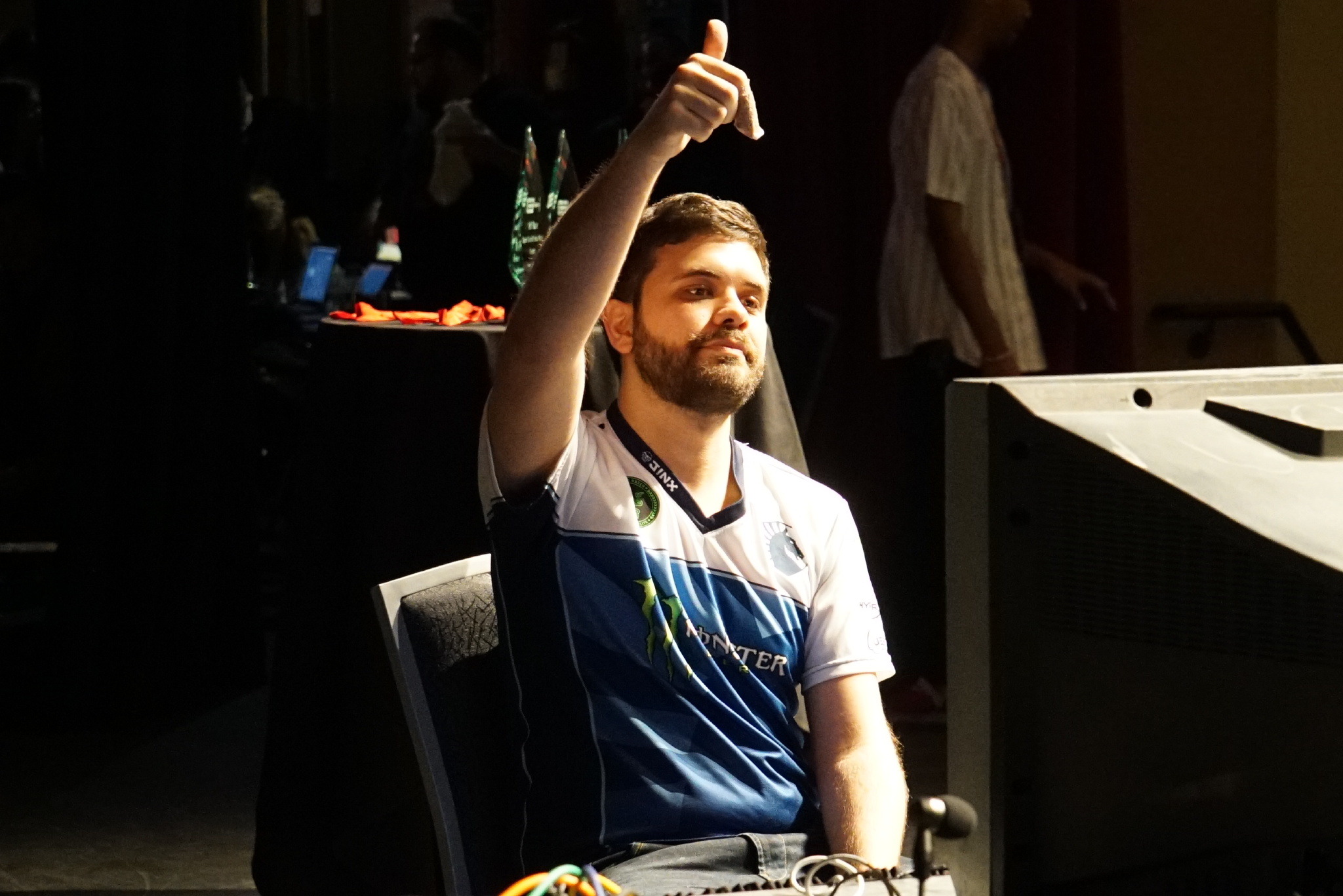 “Do you feel misunderstood by a lot of people?”


In a way, I had just given him an alibi against those that questioned his virtue— and trust me, there have been many—whether that be in Smash or as a person.

“I feel like I misunderstand myself,” he replies with an introspective tone.

For a man unafraid to express his emotions, that was as vulnerable as I had ever seen him before.

There’s something funny about the way the spotlight can exaggerate someone. You might watch, say, a player like Armada combo someone with the precision of a robot, and you might even buy into the idea that he is actually made of spare wires and fuses. Then, you read his Twitter account and realize that he’s as encouraging and empathetic towards the community as the next guy, perhaps more.

This is exactly what I realized about Hungrybox when I first met him at a recent Southern California regional tournament. I watched him play card games with fans outside the venue, interact with a plethora of other top players, and even keep to himself whenever he got the chance. Minus the Team Liquid jersey he had on and the ornate Smash Rivalries controller he was playing with, you would have assumed that he was any other aspiring Smasher looking to climb the ranks.

That just the phrase that’s usually tied to Hungrybox like a ball and chain: “You would have assumed that…” It’s just one indicator of how little the public thinks it knows about him.

Maybe I was venturing a little too far into the deep end? It didn’t matter, anyways.

See, interviewing is like a delicate dance—a dance of trust. You take the lead as your partner (the interviewee) works out the choreography. At first, it can feel like an awkward waltz, an out-of-rhythm tango, or a staccato fox trot.

Your hope is that the two of you build a solid rapport. Not only do you want your subject to master each step, but you’re dying for them to wrest control away from you and make the dance their own, even if that takes you through some twists and turns you weren’t prepared for. 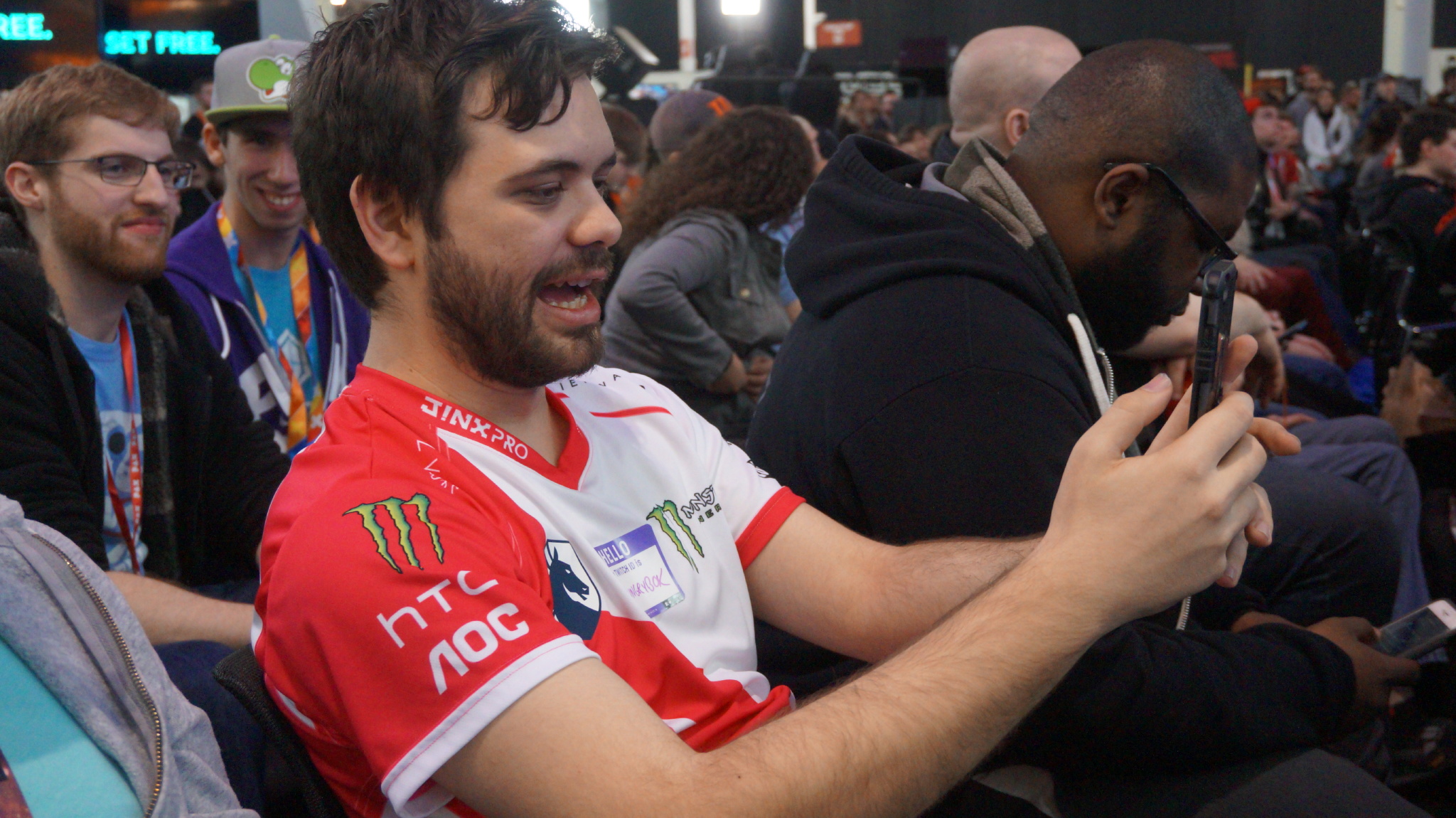 That’s why I set up a round of quirky get-to-know-you questions—basically my personal version of those old blind dating game shows where each contestant describes himself with as much flavor as possible. I wanted to give him the chance to spiel in whatever direction he desired.

Just like any other type of box, there are plenty of sides of Hungrybox that might take you by surprise. I peppered him with some light-hearted questions to get a little insight:

And yes, he still claims that he only “love-tapped” Blur’s TV.

I also wanted to see how he viewed his fellow Smash elite outside of the game:

As tongue-in-cheek as his responses were, he’s always viewed his competitors with a level of respect and camaraderie.

“I view all top players as compañeros—like colleagues, I guess—because we’re all studying the science of Melee. There’s a lot of really cool people. Everyone’s cool when you get to know them.” 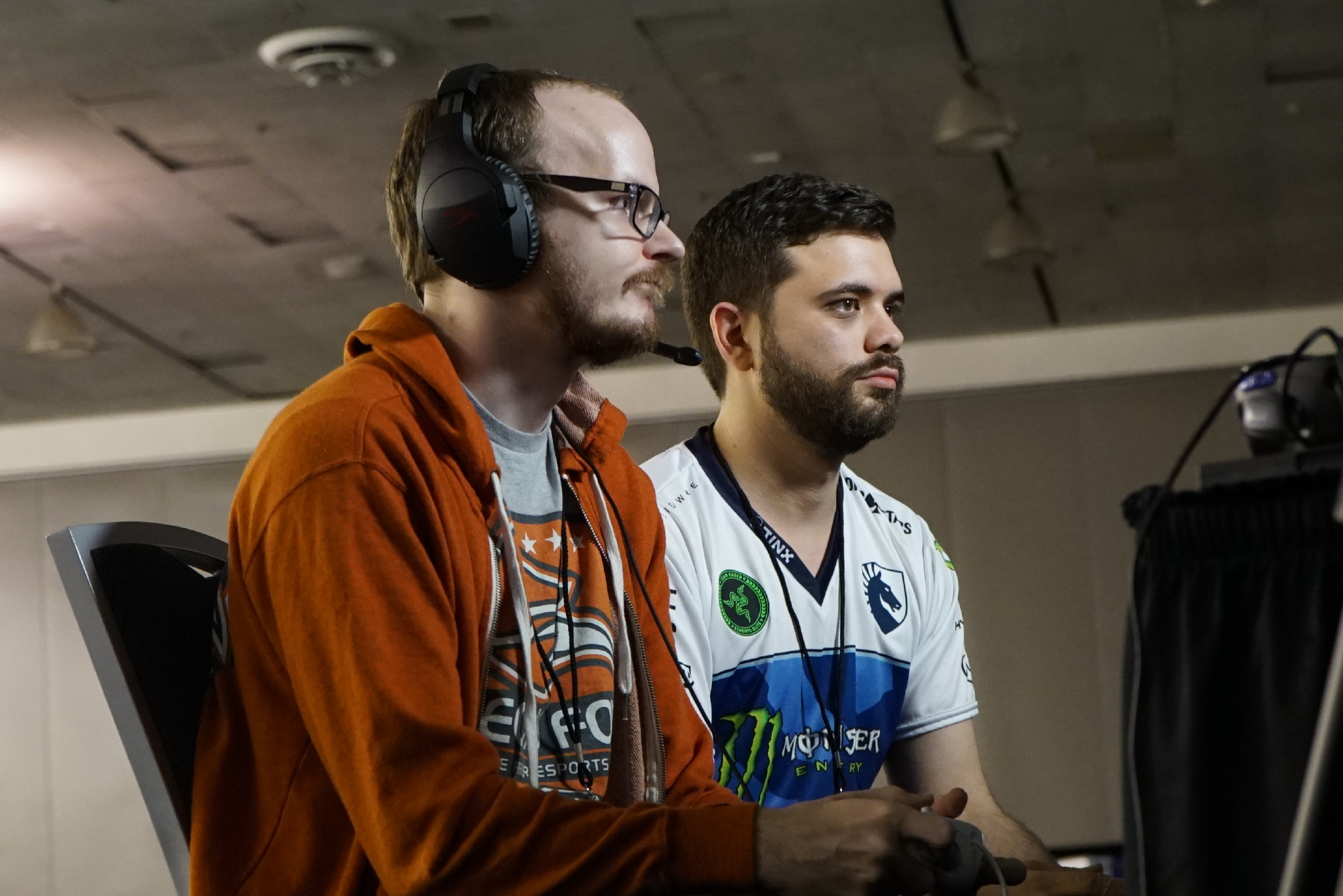 Controversy hasn’t been shy to follow Hungrybox around throughout his career. You’d be hard-pressed to find one of his sets on Twitch without someone in the chat spamming ResidentSleeper emotes (aside: ResidentSleeper is an emote that expresses boredom on Twitch). Hungrybox’s oft-patient style of play has drawn the ire of many over the years, but it wasn’t until a recent set at The Bigger Balc when he finally had enough.

He was up against Army, one of SoCal’s premier Ice Climber players. The Puff-IC’s matchup is dicey to begin with: to avoid getting 0-to-death wobbled by the Ice Climbers, Hungrybox’s Jigglypuff camped the platforms and attempted to run the clock down and win by percentage. It’s a strategy that works, but it’s also one that isn’t fun to watch.

After winning grand finals, he made his way to the interview desk. You could almost feel the frustration brewing beneath his disgruntled expression.

He couldn’t help but vent for the next 9 minutes.

Why did people think Puff was so hard to beat?

How could people be mad at someone for camping against a character that can kill you off of one grab?

How stupid is the idea of a ledge grab limit?!?

It was unbridled emotion, and he was spilling it out everywhere. You could even call it the antithesis of another complaint Hungrybox hears all the time: he celebrates too hard in the faces of his defeated opponents. Known as “pop-offs”, they can be considered disrespectful and boisterous if done excessively. Of all the pop-offs in the history of Smash, Hungrybox’s are among the most memorable and outrageous.

I remembered our interview from the previous day, and immediately I knew where he was coming from.

It had less to do with Hungrybox and Melee, and it had more to do with Juan DeBiedma the person. Growing up, showing emotion was not only a cultural norm for him—it was a cultural expectation.

“I think that people are so uncomfortable with emotion, especially in this country,” he told me. “I’m Argentinian by heart. I’m from a different culture. I always show emotion because it’s natural. I’m not hiding anything. People take it as: ‘Oh, he wants attention.’

“I think it’s the most borderline asinine assumption to make. Just let me do what I do”

What struck me most, however, was what he followed that up with.

“I know it’s histrionic, and I know I can be loud or socially aggressive sometimes,” he continued, “but it’s honest emotion, it’s pent up, and playing Puff under a lot of pressure does that.”

He delivered each phrase he spoke with growing fervor, as if he was trying to exhale each criticism against him in short breaths. There was clarity in his voice, though, the kind of clarity that comes from someone who’s come to terms with his own faults, too.

Just as his sets usually play out, he adapted over the years. He knew that his mentality was the key to dominating the field and handling the naysayers. Even today, he still spends most of his time prepping his mindset for tournaments, rather than trying to practice as much tech skill as possible.

“I focus more on being happy, because if you focus all on your game and on your play, and not on your mindset, when you get there and you’re not able to execute the thing(s) that you practice, you not only lose, but you have a mass level of frustration.

“But I feel like if you’re happy and you lose, if everything else in life has a balance—a zen—to it, then losing really isn’t that bad.”

Hearing that he has a “zen” is probably unusual for people. Most see him as a fiery competitor that will do anything—and I mean anything—to win. No, this was someone in tune with themselves, a far cry from what even I believed he would be like.

It clicked for me.

So then, how does he still misunderstand himself?

“I feel like I misunderstand myself, as crazy as that sounds.” There wasn’t even a trace of hesitation in his tone of voice.

“Maybe they’re right and I’m wrong, but I play this game for a lot of reasons…I think I’ve treated this role as a top player not always in the best way.”

I wasn’t going to stop him. This was his catharsis, however short it may be.

“It’s not because I’m inherently a sh*tty person or anything like that…I think I’m just young. I think I’m always naive. I can learn one thing one day and then still not know about everything else because of it. It just raises up more questions.” 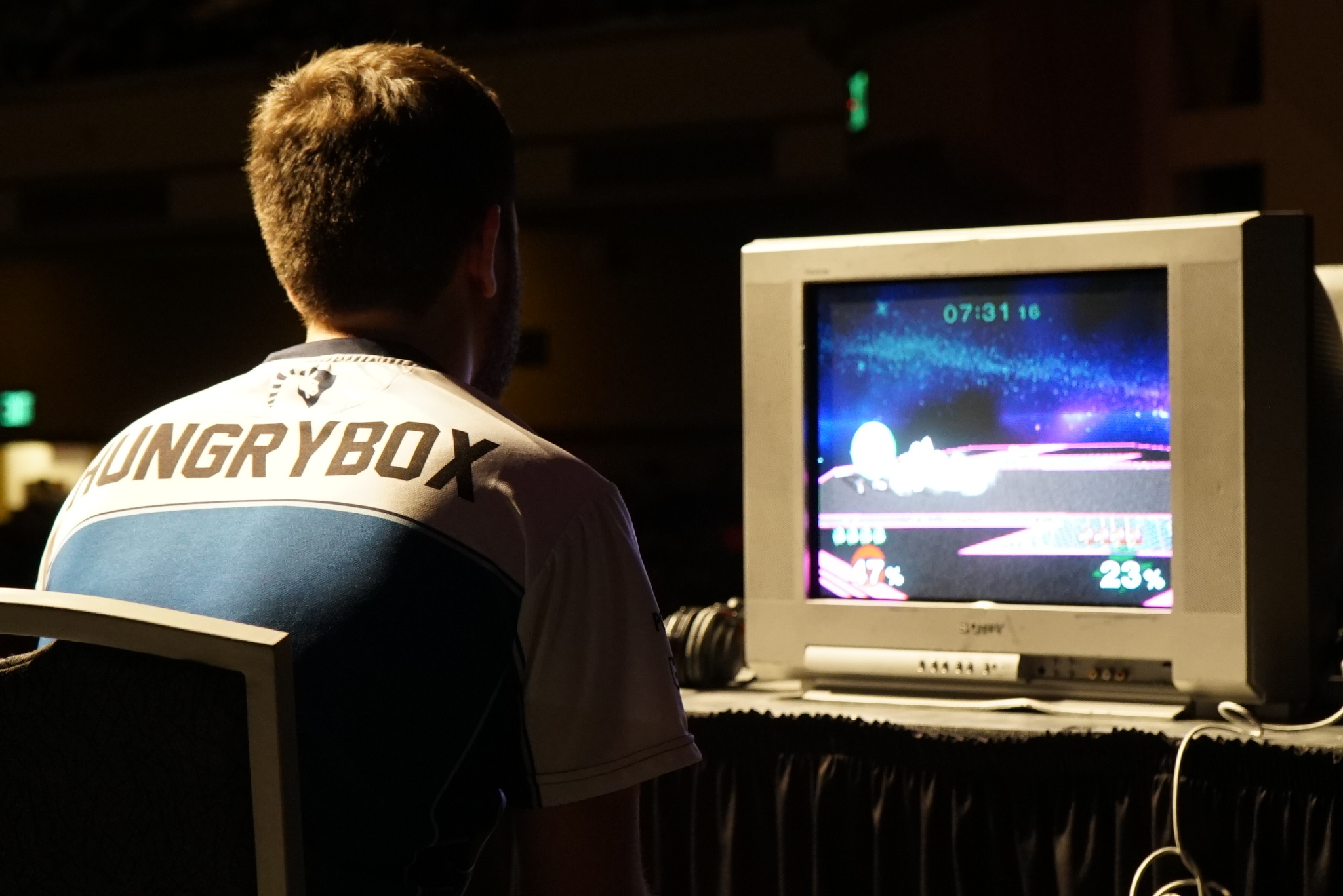 It comes to show how far we always are from perfection. We spend our lives with our heads up, chasing dreams and goals without looking down to see the small steps we take. We ignore the faults that keep us from improving.

But just as there was intent in his words, there was purpose behind his passion. He had a self-awareness that even he might not give himself credit for. He’s still learning, after all.

Melee has become much more than a game for Juan “Hungrybox” DeBiedma—it’s become a vehicle for personal growth.

“You can’t make the game give you pain because you’re in for self-destruction at that point,” he points out to me. “People stress ‘optimize this, optimize that’, and that’s good…but man, why are you playing Melee in the first place if it doesn’t make you happy? That’s more important than any[thing] money could ever get you.”

He’d go on to win Smash n’ Splash 3 the following week. Something tells me that that’s just icing on the cake for him, though. 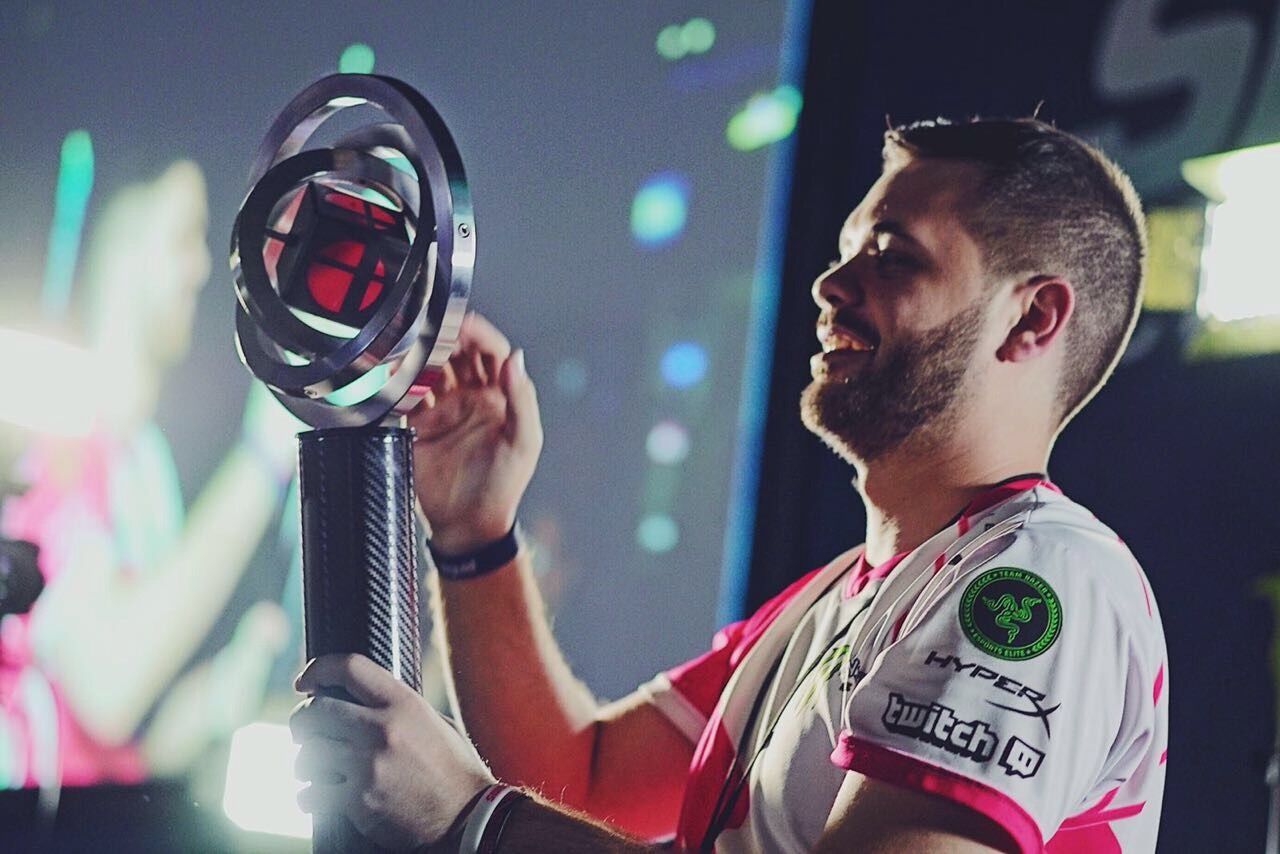 Don't forget to keep checking TeamLiquid.com for the latest in TL news, events, and features! And don't forget to follow us on social media to keep track of our teams.

Please log in with your teamliquid.net account to post a comment.
League of Legends   Yeon: No Pressure for the Rookie 2023 saw a complete change in approach for Team Liquid League of Legends program. For fans, players, and leadership, it felt like a necessary one. Two straight years of falling short with super teams culminated in the team missing the World Championship for the first time since 2017.
League of Legends   CoreJJ’s wake-up call to the LCS The way CoreJJ sees it, if the LCS want to rival the LCK and LPL then it needs to wake-up and put in the work. He's worked with Team Liquid to put together a roster that will out-work and out-perform the rest of the league so sharply that it will wake them up to their weaknesses. "Work-life balance is a mirage," says the world champion. And now it's time to come back to reality.
League of Legends | Auto Chess   Chatting: Can the Community Outsmart the TFT Meta? Looking for an off-meta and offbeat comp for Set 8 in TFT? Well, look no further! We've spoken with the TFT community (particularly, robinsongz and Kurumx's discords) to find 3 off-meta comps that just might be able to challenge the Jax's and Yuumi's and Sett's of the world. Then we had a high elo TFT writer try out each comp and give a writeup on the strength and strategy of each one. If you want a new way to play set 8, we've got 3.
The Liquid Review - January 2023 A new year, a new Liquid Review. Were you too busy with the holidays to keep up with all the esports? Catch up with everything Team Liquid did in December 2022 with this article. We're covering everything from the BLAST run to our new League squad, to Smash's wild year-end, to RWF, to Team Liquid's world-championship win in a surprise esport.