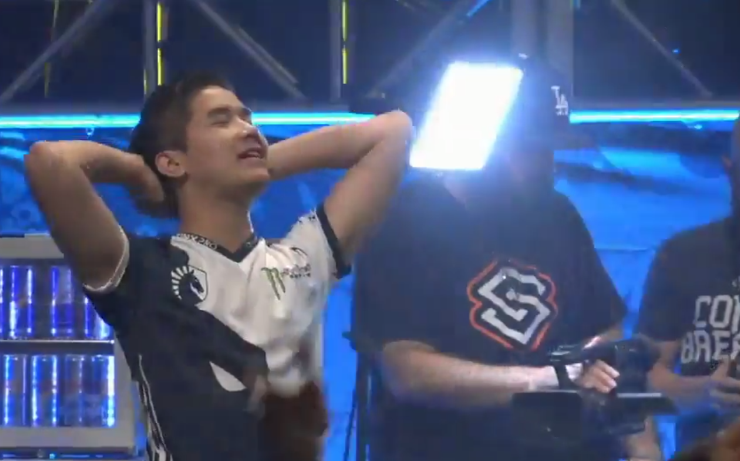 It’s been a minute but don’t think the break means Liquid’s Du ‘NuckleDu’ Dang hasn’t been busy. After a plethora of top 8 finishes and a few heart breakers along the way, NuckleDu is back on top as the champion of Combo Breaker 2017! This is the largest of the year so far—over 650 fighters sought to put their name in the FGC history books. Fortunately for us, history is written by the winners, and not many win more than NuckleDu. This event serves as a good metric for NuckleDu’s composure and stamina for huge, open entry events leading into this summer's gauntlet known as Evolution 2017. 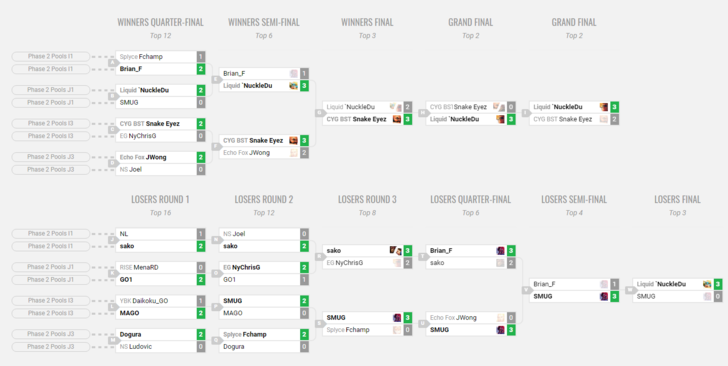 The path* to the throne had little resistance until NuckleDu ran face first into ‘Muscle POWER’ courtesy of Red Bull’s Darryl ‘Snake Eyez’ Lewis who played a ferocious yet patient Zangief. While NuckleDu found himself in a match-up that has historically favored Guile since Street Fighter II, NuckleDu actually went for a WWE style slugfest and started the set with fellow wrestler, Rainbow Mika. It didn’t take long for NuckleDu to realize he needed to take advantage of the match-up and switched to the expert in space control, Guile. Snake Eyez played out of his mind and through extreme patience and timed aggression, he was able to navigate the Sonic Boom onslaught and find his openings. In this first set, NuckleDu was his own worst enemy when an errant flash kick resulted in a misplaced jump at the worst possible moment. The mistake sent NuckleDu to losers bracket and made Snake Eyez the hero of the crowd.

NuckleDu had to hold that ‘L’ and keep his composure because the people’s champ Bryant “Smug” Huggins was ready to punch his ticket, literally and figuratively, into the Grand Finals with the always explosive Balrog. It was easy to see that NuckleDu shook off whatever jitters he had carried into the match because he disposed of Smug with the greatest of ease. NuckleDu secured his runback and was well on his way to righting his wrong.

The first battle of the Grand Finals came at the character selection screen. NuckleDu with his Mika/Guile combo covered Snake Eyez’s Akuma/Zangief quite well and after much back and forth, a blind pick was called. In a blind pick, the players must inform a judge of their character selection and they must commit to that choice. NuckleDu won that blind pick as the series started out with a favorable Guile vs Zangief, and NuckleDu went to work convincingly resetting the bracket 3-0.

Snake Eyez refused to be put away so effortlessly and stopped trying to play match-up numbers with Akuma and went back to his main squeeze, the Russian Cyclone. Despite the clear flaws in the match-up Snake Eyez put everything he had on NuckleDu and went up 2-0. Things started to look grim for our hero but fighting games are fickle and the momentum was soon on our side. NuckleDu played pristinely—perfect sonic boom spacing and tight anti-airs with a hint of ‘NuckleDu it’ psychic flash kicks proved to be an obstacle the muscle bound Zangief couldn’t flex.

While NuckleDu played the villain at this event, first knocking down popular twitch streamer Brian Foster (https://www.twitch.tv/brian_f) who had his best tournament performance ever this weekend, he went on to double kill the always lovable Smug, and then reset and eliminate the crowd favorite Snake Eyez. Something tells us that NuckleDu doesn’t mind filling that role and won’t lose much sleep on his way to cashing his check.

Follow our winner and his journey through the Capcom Pro Tour on the social media below!

Don't forget to keep checking TeamLiquid.com for the latest in TL news, events, and features! Follow us on social media to keep track of our teams.

Writer // Jeff Anderson
Please log in with your teamliquid.net account to post a comment.
League of Legends   CoreJJ: Death Of Pride // Birth of Skill "If I lose many games, I'm gonna keep playing till I win. If I win enough games, then I just watch Netflix or YouTube."
League of Legends   Jatt: Beating the Team in Front of You "Your preconceived notions of Worlds doesn't matter. What matters is beating the team in front of you."
League of Legends   Broxah: Believing is the First Step "I came to Team Liquid with two goals. One was to win LCS. The second was to be part of the first TL team to get out of group stages at Worlds."
League of Legends   Journey: Dragons, Knights, and Team Liquid Welcome to the journey of Team Liquid’s League of Legends’ team as they head to the Worlds Play-In Stage.