Just a little over one year ago, Team Liquid would set their eyes on a League of Legends player that packed more talent than we've seen in a long time. Joshua "Dardoch" Hartnett came in as a young prodigy, thrust from ranked play straight into the Academy. Then, within 3 months, he saw himself on the starting roster of a team that was built on the foundation of expectations. Dardoch exceeded the expectations of many as he came into his own in 2016 and became one the best players in North America.

Our team persevered through this season of adjustments, and we saw a lot of growth from our players inside and out of the game. Dardoch improved immensely during his time on Liquid; we saw great strides in both his play and his personality. It was certainly a memorable year with Dardoch, and his growing bond with Luorlo was a source of many touching moments.

This is news that many have been expecting for a while, and now, it becomes official. We're happy to announced that we've found Dardoch a new home. We know that the sky is the limit for Joshua, and we look forward to meeting him again, though it will be on opposite sides of the Rift.

"I'm just really grateful for all the opportunities that TL gave me.

Thank you to everybody who supported me especially on, like, TL fans and everybody who put up with me when I was kinda giving the org a bad rep. Trash talking when I knew we would lose and just kinda adding hype to the game, instead of, you know, looking out for my teammates and my organization. I hope you guys follow me to my new team. "

"Since Josh joined Liquid he has been highly competitive, motivated and driven to win which has turned him into a top jungler in NA. I wish him all the best with his future career and am excited to see him play with his new organization in 2017."

"It was a pleasure to work with Dardoch for over a year. We started in Team Liquid Academy and worked our way up together, learning and growing in our roles. I've had a lot of good experiences coaching him, and I'll always cherish those memories. I wish Dardoch good luck moving forward, and I know that he'll fulfill his potential. "

Those words struck me. I asked about a Plan B should a gaming career fall under, but he said those words and paused. That was it. Joshua “Dardoch” Hartnett may be young—an 18-year old with many years ahead of him--but he exudes confidence and drive, like James Bond fused with Rocky Balboa. He unpauses, and with his strikingly deep voice, something like a maskless Vader, he tells me more.

“I’m sacrificing a lot to do this. I started in NACS basically for absolutely nothing other than maybe some exposure but I enjoyed it. I really liked it and kept going. College will always be there, but how often can you say you played video games professionally?”

Read the rest of "Dardoch's Ambition"

As an indelible part of Team Liquid over the past year, Dardoch has had many amazing moments in the white and blue. We've made many great memories with Joshua—and yes, there were some painful ones too—some that we're unlikely to forget any time soon. These were just a few of his finest (and funniest) moments with Liquid.

The Cleanest Lee Sin in NA

Team Liquid Academy: The After Years

The Streams and the Memes 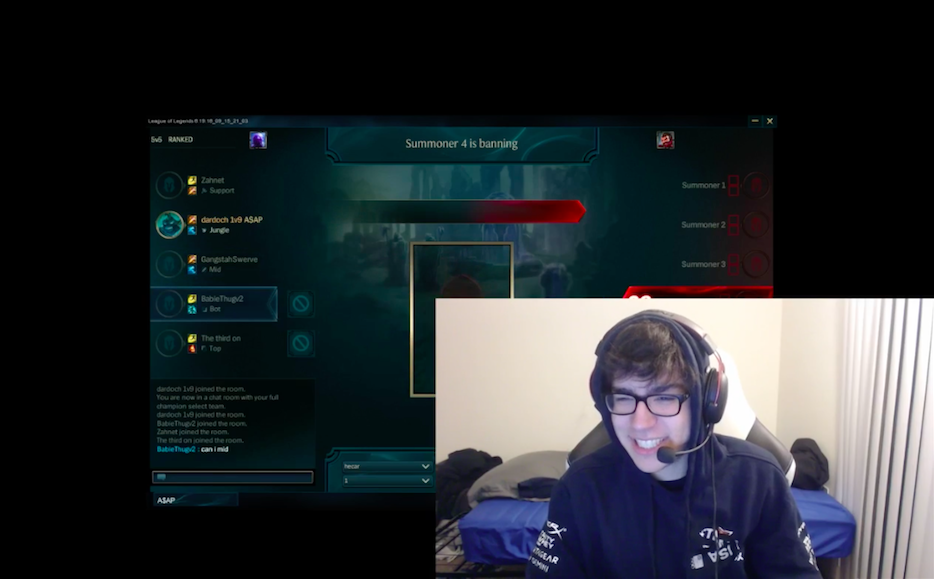 Please log in with your teamliquid.net account to post a comment.
StarCraft 2   Catching up on StarCraft: Your TSL 7 article nexus Looking to catch up on StarCraft for TSL 7? This is your main base for the articles and features we're posting on both Teamliquid.com and TL.net as TSL 7 goes on. TSL 7 is a huge part of Liquid history and StarCraft history so be sure to read up and tune in.
Team Liquid Partners with Verizon Verizon is Team Liquid's official 5G Partner. Verizon is already present and large in esports—they’re also the official 5G partner for Riot Games across the LCS, select World competitions, and Valorant esports. Initiatives they support at Team Liquid include optimizing the network of our streamers, pros, and facilities, engage in our community initiatives and promote Liquid to fans across the world.
StarCraft 2   Pole Position: 4 Top Contenders at TSL 7 In StarCraft 2, the battle to the best is playing out over razor-thin margins. Many of StarCraft's best players have fought to qualify for TSL 7 - Team Liquid and Shopify's own premier tournament. Of the field of 16 players, 4 stand out in particular. Learn about their styles, their strengths, their histories, and their hurdles here.
Fortnite   Good in Games TL x AW Careers Programs Alienware and Team Liquid are launching a series of programs. These are tournaments, internships, a chance to earn scholarships, and content that helps you learn about esports careers. We’ve designed them to make a space where all of us are welcome: TL.GG/GIG