December 03 2015
WHAT CAN BE BROKEN CAN ALSO BE REFORGED

The road has been a bumpy one for Team Liquid'Heroes since losing to Cloud9 at MSI MGA in August. For a solid four months before and after the official launch of Heroes of the Storm, TL dominated the European scene, placing 1st in over 24 tournaments and earning over $50,000 in prize money alone. However, the past 3 months have been tumultuous, with the most disappointing loss coming at the European Regionals in Prague where the team fell to Dignitas 1-2 and exited the tournament with a 5-6th placement. With their BlizzCon dreams extinguished it was time to make a change. 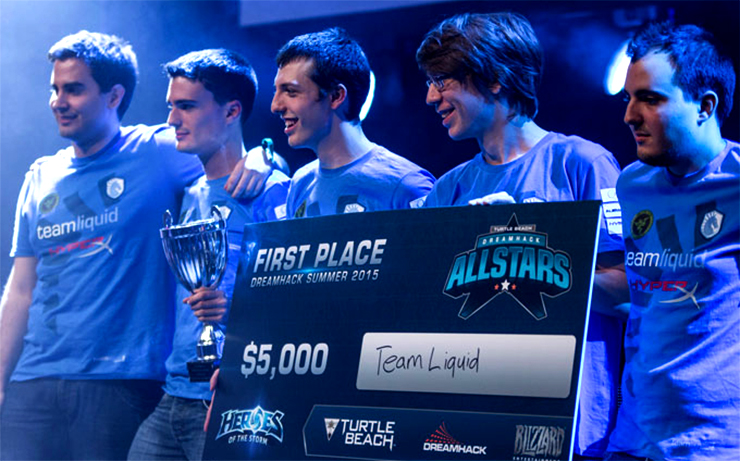 Before long, the roster parted ways with Falcon, Granpkt, and Blackscorps leaving the pro-Starcraft foreigner twins of VortiX and LucifroN as the remaining core members to build around. And yet, even with only two of the original five left, it wouldn't take long for Liquid to begin the filling process.

REAL SPORTS TO ESPORTS
“I want to play with LucifroN and VortiX."
The first new addition to the team comes in the form of former Fnatic player, ‘Lowell’. His real name is a mouthful: Joaquim José Fitas Carvalho. But don't let that flurry of words fool you. Lowell means business and stands by his decision to join the Liquid squad and understood immediately what he wanted to do.

Fitas comes from an athletic background, competing in the art of Japanese sword fighting known as Kendo. "Competitive gaming began as a replacement for me because I got very ill" Lowell tells us. "I had to stay in bed during my teenage years. That sadly prevented me from competing in Kendo as I wanted to.”

Turning to competitive video games, Fitas found his first home in World of Warcraft arena. "At first, I started casually competing in World of Warcraft arena when I was 14 or 15 years old, which was an amazing time because it could not pay unless you were actually in the top 10 of your region or so. That meant it was purely competition for the sake of competition and I like to believe that it is the reason I’m here today, because that state of mind did not change for me. I just want to play with my teammates and be the best with them and whatever comes from it is a bonus."

After his run in WoW, Fitas transitioned into Guild Wars 2 where he would be apart of the best European team in the game before moving into Heroes of the Storm and playing with mYinsanity and more recently the semi­-successful Fnatic.

"After EU regionals, when I made the decision to part ways with Fnatic," Lowell says, "I really took some time to think what I wanted to do team-wise and ended up with something pretty clear. I wanted to play with LucifroN and VortiX. I felt there would be a lot to learn from them as professionals and as humans.”

And he was right.

The new roster, which included Lowell, broke the curse at the Fragbite Masters, with the team placing 1st and earning $4,700. The team came close to a follow up at DreamHack Winter, but a close 1-3 defeat in the grand finals against Lowell's former team Fnatic meant that TL had to settle for 2nd place.

However the biggest event on the horizon is the WCA Global Finals in Yinchuan in mid-December where the team will be playing for their share of $250,000. “It’s the first international tournament I get to attend as a player, and that we get to attend as a team, so we can learn a lot from it, and become better as a unit for the 2016 season. We are all SO ready and SO hyped!” Fitas exclaims.

But it's not just excitement that fuels Lowell. Naturally, he's certainly dedicated, queuing a minimum of 8 hours a day—and that's just on gameplay alone. He spend the rest of those very few daylight hours watching VODs and going over replays. It very likely continues even in his sleep. “[My practice time] can also go way higher," Lowell explains. "Sadly around two months ago, I hit an all-time low in my performance due to a lot of different factors, and because of that, I had to train around 14 hours a day for a month to gain my confidence back.”

Despite that seemingly low self-confidence, in game, Lowell is anything but insecure. “I mostly play bruisers or melee assassins, so beefy melee heroes or high damage but squishy ones," Lowell continues. "It happens that I have to play ranged carries from time to time. My favorite heroes are Illidan, Sonya, and Kharazim (that I finally get a chance to play!). Out of game, I usually coordinate training sessions, and I do my best to keep everyone’s head in the game during series, especially when we start with a map loss or two. Luckily, we’re all pretty good at doing that, and manage to keep each other hyped and focused.”

With a new patch recently released, it’s incredibly important that the new roster adapt to changes and do so quickly to keep up with the competition. “Every team is trying new things, or working on improving old strategies. My current feeling is that ranged burst is too high and makes fights look like Westerns, but it’s very subjective. Luckily, with VortiX, Cris and I all loving “weird” and unconventional heroes, we have A LOT of things to try out and should be able to adapt to or break any kind of meta,” concludes Fitas.

In closing, the new roster looks and feels promising. Lowell enjoys the fact that it's not perfect—yet—and finds that additional skill ceiling to be beneficial to the team's future. After all, the team is already quite solid despite the limited time they've spent together. “So far, we’ve lost some [games], and we’ve won some… And that’s fantastic," Lowell says. "It proves that we are capable of losing as a team and can work on correcting the mistakes calmly and efficiently. I do not know if we will be the Team Liquid that wins absolutely everything for a given period of time, but I think that we will be the Team Liquid that can stick together in defeat, work hard to win, and be the Team Liquid that ultimately doesn’t know how to give up, the one that says 'It’s not over until we win'.”

Dylan is the Lead CS:GO and Heroes of the Storm writer for @TeamLiquidPro. Outside of that, he's the professional scrim scheduler and gaming house mom for @Cognitivegg. Achievements include Rank 1 on Skype and aspirations involve growing esprouts in his own garden. You can fund or otherwise follow his progress @COG_Dylux.

Writer // Dylan "Dylux" Walker
Graphics // Felix "Heights" Temple
Editor // Ken "Chaobo" Serra, Lichter
Photo Credit // Brittany Lattanzio, Fnatic
Please log in with your teamliquid.net account to post a comment.
League of Legends   CoreJJ: Death Of Pride // Birth of Skill "If I lose many games, I'm gonna keep playing till I win. If I win enough games, then I just watch Netflix or YouTube."
League of Legends   Jatt: Beating the Team in Front of You "Your preconceived notions of Worlds doesn't matter. What matters is beating the team in front of you."
League of Legends   Broxah: Believing is the First Step "I came to Team Liquid with two goals. One was to win LCS. The second was to be part of the first TL team to get out of group stages at Worlds."
League of Legends   Journey: Dragons, Knights, and Team Liquid Welcome to the journey of Team Liquid’s League of Legends’ team as they head to the Worlds Play-In Stage.