Team Liquid Smash will bring down the House!

October 01 2015
Coming up this weekend, The Big House 5, one of the biggest Smash Nationals of the year, will be hitting up the Royal Dearborn Hotel in Dearborn, Michigan. With the increasing number of entrants at Smash tournaments, TBH 5 continues the trend with 1,320 Melee entrants with the help of a crowdfunding campaign called “The Big House Compendium”. Along with a entry cap increase, the Compendium also added $12,000 in pot bonuses and an 8 team regional crew battle.

Coming off a 2nd place showing at HTC Throwdown, Juan “Hungrybox” Debiedma is coming strong into this national. With William “Leffen” Hjelte and Kevin “PPMD” Nanney out of the picture, Hungrybox will only have to contend with the remaining gods: Adam “Armada” Lindgren, Joseph “Mang0” Marquez, and Jason “Mew2King” Zimmerman. Yet, with an astonishing amount of upsets in recent tournaments, no one is guaranteed Top 8. Even Gods aren't safe. 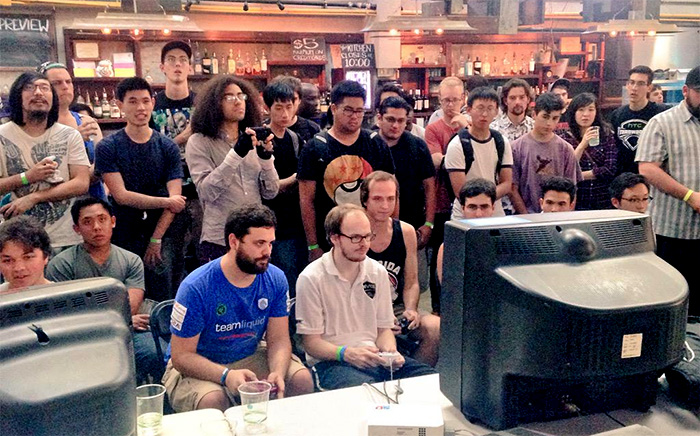 Along with Hungrybox, we also have fellow TL Smasher and Melee veteran, Kashan “Chillindude” Khan, entering the fray. Keeping consistent by placing in the top 64 of past tournaments, Chillindude is still staying strong as a solid player who will still strive to show himself as one of the Fox founding fathers.

Then there's Nairo "Nairo" Farron, who dropped the mic at all of his recent events. Two 1st Place showings at Paragon and Umebura F.A.T. prove that TL's fresh face is ready to continually add to his ever-growing shelf of achievements. And we all know once Nairo draws first blood, there's no stopping this monster from wracking up win after win.

It's going to be a tough road punching through more than 1300 combatants, but the Team Liquid Smashers are confident in their ability and are prepared for the bloodshed.

Be sure to check up on all the Smash action this weekend on VGBootCamp, ShowdownSmash, and TourneyLocator. Also, visit UMSmash to learn more about brackets, schedule, and more! And check up on Team Liquid Pro for the latest in TL news, features, and events!

Writer // Brendan Viloria, Ken Serra
Graphics // Felix Temple
Please log in with your teamliquid.net account to post a comment.
Smash   Liquid Legends: The Counterpick Unlike the two spacies (Fox and Falco), Melee’s mainstay floaties were not created equal. Puff is solidly better than Peach in a lot of respects and wins the matchup pretty handily.
Smash   Hungrybox is Absurd The career of Juan “Hungrybox” Debiedma is absurd.
CS:GO   From 16-1 to 6-16: Love and Heartbreak in CS:GO In Counter Strike, if a team loses a map with less than 6 round wins, it’s a beatdown. It’s such a beatdown that we normally see it in an outclass scenario—a tier 1 team against some upstart. When it happens between two tier 1 teams, it’s often not an outclass and more a perfect storm.
League of Legends   Leading from the Isolated Lane In the average TL game, Alphari leads his lane opponent by 493 gold and 12.5 CS by 10 minutes. If you don’t know the numbers of League, this may not seem like much.