September 28 2015
It's just win after win for the Team Liquid boys! This past weekend, Du "NuckleDu" Dang, headed straight for Dallas, Texas, the stage for this year's Absolute Battle and crushed the competition, crushing the tournament with a handful of 3-0 victories as he progressed through the bracket.

The Grand Finals saw NuckleDu's Decapre challenge TL I BP Cast Blanka's..well.. Blanka to a Best of 5 series. NuckleDu didn't see a single match loss since entering the Top 8, while Blanka fought his way through the loser's bracket. Momentum was already on NuckleDu's side.

The first match was shaky for Liquid's fighter, as he'd drop a round and then cut it close in the last match. But after that, NuckleDu would control the flow of the series. Two 2-0 rounds followed and the game would go in favor of Team Liquid's resident fighter. 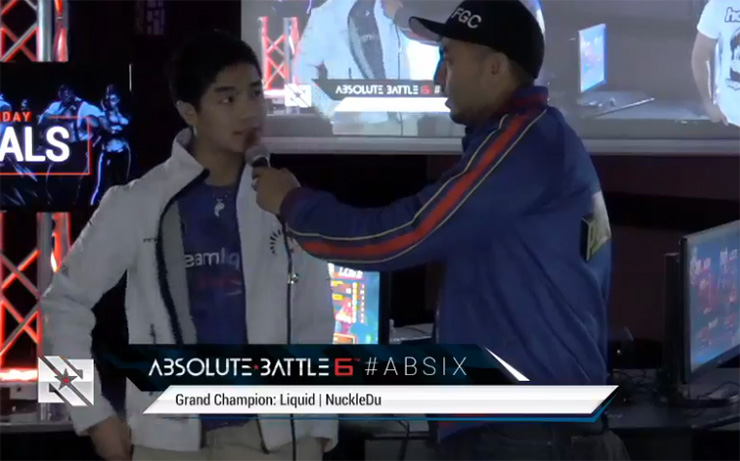 "I don't know what to say," NuckleDu said in a post game interview following his victory. "Texas has this really big candy store I like. So I just buy a bunch of candy."

Yup, that quote doesn't have much to do with his win, but he keeps going back to that candy store then proceeds to win at Texas events. Not going to complain about that.

Writer // Ken Serra
Photo Credit // PandaxGaming
Please log in with your teamliquid.net account to post a comment.
League of Legends   Liquid VALORANT VALORANT caught the world by storm the moment beta keys dropped this past April. It was the perfect fusion of FPS gun-play and ability based combat you expect to see in a MOBA. Now, we proudly introduce Liquid VALORANT to the world!
CS:GO   Stronger Together - Pasha Joins the Stream Team The man, the myth, the legend — PashaBiceps joins Team Liquid's stream team!
CS:GO   Welcome Grim to TLGO We're excited to announce that Grim is the newest member of Team Liquid's CS:GO squad!
League of Legends   To Be The Best Player The story of Tactical (so far).