September 21 2015
This past Saturday, HTC and Showdown Entertainment held the HTC Throwdown at Folsom Street Foundry in San Francisco, CA with a pot bonus of $12,000 split between Melee singles and doubles. Out of 386 singles entrants, three of them represented Team Liquid. Two of our players, Ken "Ken" Hoang and Kashan "Chillindude" Khan, had a solid showing at HTC Throwdown and made it to the second round bracket on Winners side. In the end, Ken lost to Johnny “S2J” Kim and DaJuan “Shroomed” McDaniel, earning himself 17th place. Chillindude lost to Kevin “PewPewU” Toy and Ivan “gaR” Van, ending up in 33rd. 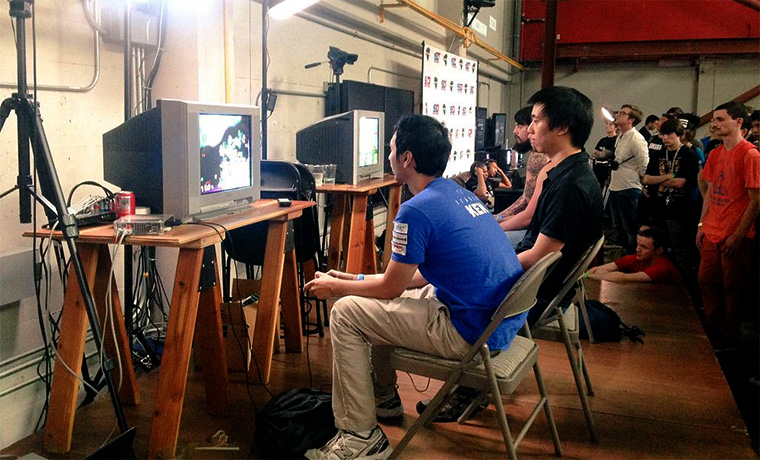 The tournament overall was an absolute bloodbath. Results were unpredictable from beginning to end. Contrary to the usual partitioning, multiple "Smash Gods" were upset. Joseph “Mang0” Marquez lost to Sami “Druggedfox” Muhanna in R2 Winners and was subsequently knocked out by McCain “MacD” LaVelle in R2 Losers, placing him at 17th. In addition, Jason “Mew2King” Zimmerman lost a close match to Otto “Silent Wolf” Bisno, 3-2 in Top 8 Losers Quarterfinals. Once the dust settled, only Hungrybox and William “Leffen” Hjelte persevered .

Coming off of a top 3 placing at Paragon LA Hungrybox breezed through the bracket, beating top players like Axe and HugS. Making it to Top 8 Winners, he faced three prominent Fox players in succession: Silent Wolf, Colin “Colbol” Green, and Leffen. Hungrybox easily defeated both Colbol in Winners Semifinals and Silent Wolf in Losers Finals 3-1 in order to meet Leffen in Grand Finals. Alas, Hungrybox struggled against Leffen throughout their matches. After losing 1-3 in Winners Finals, he returned for a rematch only to get wiped 0-3 in Grand Finals.

Win or lose, you can always come out of an event with something to show for and Hungrybox produced some fruitful data. Jigglypuff is usually regarded as a campy character, slow and sluggish, better known for being infuriating to hit rather than a dominant choice. Yet Hungrybox constantly pushes her to the limits. According to this graphic he even keeps up with Fox, considered the most technically demanding character in the game.

In the face of the 20XX adversities, Hungrybox still maintained his own, being the only Jigglypuff to consistently reach the quarterfinals of major tournaments. But he wouldn't stop there. He'd continue to reap the rewards in Melee Doubles.

In addition to his 2nd place finish, Hungrybox teamed up with Mew2King for Melee Doubles. The duo easily made it to Top 8, ultimately placing first against strong competition. They first faced renowned team PewFat and cut it very close, going 3-2 with Hungrybox clutching a last game, last stock situation versus Zac “SFAT” Cordoni. In the Grand Finals they played MacLeffen, losing 1-3 before bringing it back with another 3-2 victory. Despite facing a super solid combination in Fox/Peach, Hungrybox and Mew2King overcame it with their unique Sheik/Jigglypuff team.

Check out smash.gg for full brackets and results! And be sure to come back to Team Liquid Pro for the latest in TL news, events, and features!

Writer // Brendan Viloria
Photo Credit: Robert Paul
Editors // Cosmicspiral, Ken Serra
Graphics // Reuben Atchana
Please log in with your teamliquid.net account to post a comment.
League of Legends   Jatt: Beating the Team in Front of You "Your preconceived notions of Worlds doesn't matter. What matters is beating the team in front of you."
League of Legends   Broxah: Believing is the First Step "I came to Team Liquid with two goals. One was to win LCS. The second was to be part of the first TL team to get out of group stages at Worlds."
League of Legends   Journey: Dragons, Knights, and Team Liquid Welcome to the journey of Team Liquid’s League of Legends’ team as they head to the Worlds Play-In Stage.
The Alienware Training Facility: Now in EU! This is where it all started. 20 years ago, our co-CEO Victor Goossens founded Team Liquid in his bedroom along a quiet street in Utrecht. Today, we're officially moving to the heart of the city into a new home: the Alienware Training Facility in EU. After 2.5 years of planning, building, and preparing, it's finally ready.