G2A Pick of the Week: The Walking Dead: Video Game

Every week, Team Liquid will supply you with their pick for the G2A Game of the Week, which you can buy at an extremely discounted rate thanks to the G2A Weekly Sale. This week, we’ve chosen suspenseful story-driven game, The Walking Dead: Video Game. You can get it right now at www.g2a.com/weeklysale for $3.83, a whopping 85% off its usual price.

Based off of the ever-so popular TV-series, The Walking Dead, comes a new, story-driven video game that brings to life Robert Kirkman's The Walking Dead graphic novel. Telltale Game’s The Walking Dead: Video Game leans more towards story and characterization than action seen in games similar to Left 4 Dead, and this description couldn’t be more accurate. Complete with compelling dialogue, immersive character development, shocking scenes, and decisions that could mean life or death, the game succeeds in everything it was meant to do: Make you live a life in a zombie-infested world, just barely.

The Walking Dead is a very popular show. Even though this game is based on the series, it has its own unique story. With about 2 hours of gameplay per episode, new original characters come into play as well a few TV-series character like Glenn and Lilly. So just cause you’ve seen the whole TV-series, doesn’t mean you’ll know a thing about the direction this game is headed. 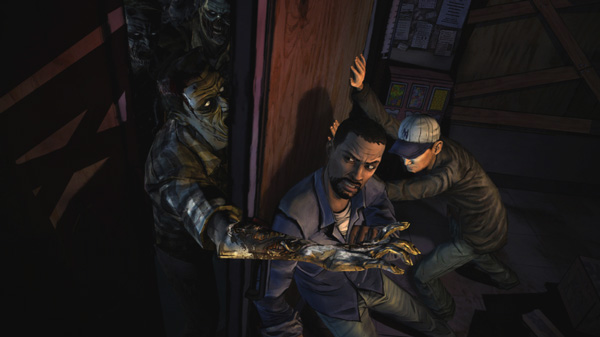 The game puts you into the shoes of Lee Everett, the game’s main protagonist and a former teacher for The University of Georgia. In the beginning, little is known about who you are and it’s apparent the zombie outbreak is in its early phase. The story opens up with you in the back of police car talking to the driving officer about what happened a moment before. A little cliché’ right here as after your discussion with the officer regarding past events, a walker ends up on the street, forcing the car to swerve out of control, which inevitably crashes onto the side of the road and into the forest.

It is here you learn something strange is going on, as the supposedly dead officer who was ejected out the windshield comes to life and attempts to eat the flesh right off your body. This moment acts more as an introduction to the world and provides you with knowledge on the gameplay as you proceed to turn the officer into meat chunks with his own shotgun.
After these events, you move onto the closest house where you discover a young eight-year-old girl by the name of Clementine through a walkie-talkie found inside her house. She has been living in her tree house all by herself in an attempt to survive the zombies till her parent returned from vacation. A moment where she saves your life from her undead babysitter, Sasha, fills your heart with the need to take her in and protect her.

Clementine then becomes your partner through-out the story, the girl Lee wants to protect till everything is sorted out, if ever sorted out. She is clearly helpless since there are moments where you need to save her, but it’s almost as if Lee needs her more than she needs him. It’s apparent he “keeps him sane”, and it’s through her you find more about who Lee is and where he comes from, with the stories seemingly always ending in “let’s keep this between us.”

It’s apparent the game was never meant for the true action-game fan. You don’t slay zombies with a blender or anything. The game is as “real” as it gets and if you’re really into story and drama, the game is for you. I’m sure most of the gamers picking this up will have seen or heard of the TV-series. That’s not to say there’s no action, as the few action-sequences the episode contained were all extremely suspenseful, and I’m not saying that lightly. 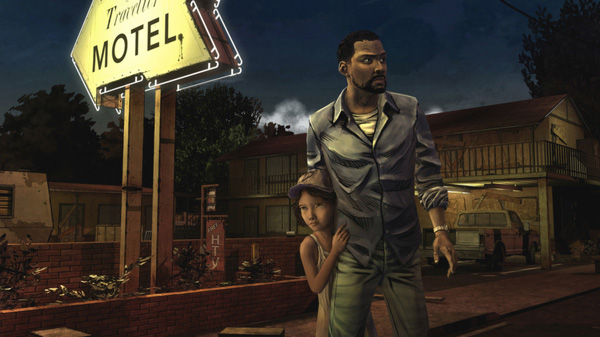 The game has a very easy-to-use user-interface. You’re only permitted to move your character and move a cursor around the area to check things out or initiate certain actions like dialogue, hand food, hit, and what not. The cursor will tell you which action is assigned to which button when you move it over an “action dot.”

The rest is pretty simple. The games dialogue is similar to that of some well-known RPGs like Mass Effect and The Old Republic. You’re generally given four options to choose from, each different in its own right. You can choose to tell the truth, answer a question vaguely, lie, or not answer at all, which creates suspicion.

Every decision you make is crucial to the future of the story as there are moments you have to choose to save one or the other. Although the story itself is linear, which I assume is for a fixed ending perhaps leading on to the TV series itself, there are many options for different pieces of dialogue that allow you to better understand different characters and even connect with them. The “feeling” of the game is stunning and the situations you are given make you feel like you were in a zombie apocalypse.

There are moments in this game that make for great drama. Characters in this game are characterized very well and you’ll find the catastrophe of the zombie outbreak forces people to lose their cool and do things you wouldn’t expect any normal person to do. A scene where the group wanted to throw out a little boy to die by zombies just because he was “supposedly” bitten almost broke my heart.

The dialogue in this game is beyond impressive and it’s very similar to that found in the actual series. The choices you make are crucial to the story, or more over, what’s to happen to you. Every time you answer a question, the game will tell you that person “will remember this moment.”, “definitely remember this moment.”, and other stuff as well. A moment with TV-series character Hershel Greene, who makes an appearance, scolds me and decides he doesn’t trust me when I chose to lie about how I got in the city (through a police car, if you catch my drift).

Straight from a Comic

The art style for this game is interesting. It actually reminds me of Borderlands’ sort-of cell-shaded kind of visuals. I’m sure the graphics were left this way to remind players that this game is based off of the graphic novel. It may not be the best graphics ever, but they’re very fitting for the game. Besides, the story is so good that the game could have been made using stick figures and you wouldn’t notice it till it was over.

So what’s the deal?

If you’re a zombie fan looking for a story-driven game or perhaps you’re simply just a big fan of the TV show, I recommend this game 100%. Simple gameplay and controls that don’t tie your hands together allows for anyone to play, whether you’re a gamer or just someone who wanted to check this out.


Writer // Ken Serra
Please log in with your teamliquid.net account to post a comment.
League of Legends   CoreJJ: Death Of Pride // Birth of Skill "If I lose many games, I'm gonna keep playing till I win. If I win enough games, then I just watch Netflix or YouTube."
League of Legends   Jatt: Beating the Team in Front of You "Your preconceived notions of Worlds doesn't matter. What matters is beating the team in front of you."
League of Legends   Broxah: Believing is the First Step "I came to Team Liquid with two goals. One was to win LCS. The second was to be part of the first TL team to get out of group stages at Worlds."
League of Legends   Journey: Dragons, Knights, and Team Liquid Welcome to the journey of Team Liquid’s League of Legends’ team as they head to the Worlds Play-In Stage.