Every week, Team Liquid will supply you with their pick for the G2A Game of the Week, which you can buy at an extremely discounted rate thanks to the G2A Weekly Sale. This week, we’ve chosen the tower defense game, Dungeon Defenders. You can get it right now at www.g2a.com/weeklysale for $2.71, a whopping 83% off its usual price.

If you played such games as Orcs must Die! or Trenched, then you're already familiar with the mechanics of Dungeon Defenders.

The goal is to protect one or more structures, called cores, from increasingly difficult waves of goblins, orcs, and other fiends. You do this using your character's unique buildings and abilities, all of which you can upgrade and customize. 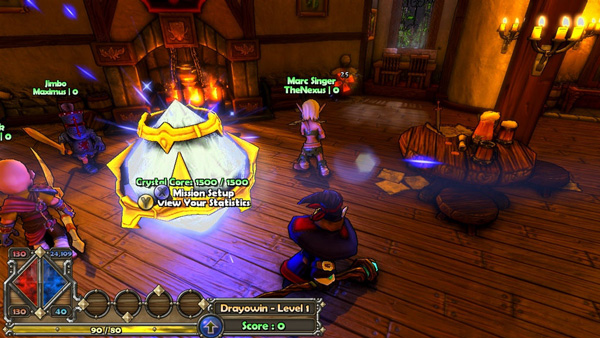 You start by choosing between four iconic characters: wizard, squire, huntress, and monk. Each has his or her own unique fighting style and structures to use in combat. The wizard is the game's most straightforward character; he fights at range using magical projectiles with the ability to raise walls and offensive turrets. On the other end of the spectrum is the monk. Possibly the most complex character, the monk is adept at both range and melee fighting and can deploy status-effecting auras on the battlefield.

Once you put the finishing touches on the character of choice, it's time to hit the battlefield. With twisting alleyways and stairwells, the stages may look confusing, but they all follow the same rules. Enemies pour in from giant gates that line the outside of the map and then split up its numerous routes. While they take different directions, their goal is singular: the destruction of your cores. Your goal, on other hand, is to identify the map's choke points and clog them up with as much stuff as possible. 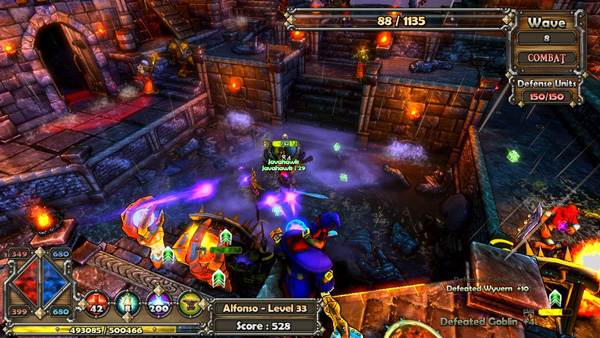 The game does get pretty difficult, really fast. The more you level up and progress, the more difficult your opponents become. Your attacks become weaker and repelling enemies becomes a test of how well you place down defensive turrets and lock down chokes. Fortunately, the game does help you catch up.

Once the dust settles, it's time to collect your reward. All across the battlefield, swords, staves, and suits of armor will be left behind by your vanquished foes. Handy pop-up windows quickly relay information about an item's specifics. Some items will improve your character's base statistics, while others will change the properties of their attacks. There's even a big thumbs-up (or thumbs-down) icon to tell you if it's better than what you're wearing. And with a healthy injection of funds--collected from chests and fallen foes--your items can be increased in level to further enhance their bonuses.

Your characters also advance by defeating enemies. After leveling up, you are awarded points to improve either your character's stats or structures. Do you increase the health of your wizard's turrets or the damage output of his attacks? You decide. 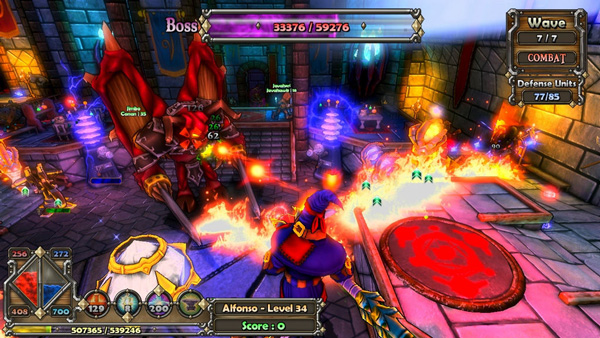 The difficulty may be steep, but if you're willing to grind there's always another challenge waiting to knock you on your rear.

Writer // Ken Serra
Please log in with your teamliquid.net account to post a comment.
League of Legends   CoreJJ: Death Of Pride // Birth of Skill "If I lose many games, I'm gonna keep playing till I win. If I win enough games, then I just watch Netflix or YouTube."
League of Legends   Jatt: Beating the Team in Front of You "Your preconceived notions of Worlds doesn't matter. What matters is beating the team in front of you."
League of Legends   Broxah: Believing is the First Step "I came to Team Liquid with two goals. One was to win LCS. The second was to be part of the first TL team to get out of group stages at Worlds."
League of Legends   Journey: Dragons, Knights, and Team Liquid Welcome to the journey of Team Liquid’s League of Legends’ team as they head to the Worlds Play-In Stage.