June 19 2015
Hey guys, Liquid`Savjz here! As you all probably know I spent the weekend in Sweden battling at Dreamhack Summer 2015. While I did not make the top eight I did have a good time and found Hearthstone's first Swiss tournament a good one to have taken part in. Before I left last week I wrote up a breakdown of the decks I chose to bring and -- now that the tournament is over -- I want to share it with you.

Looking Back to Before Dreamhack 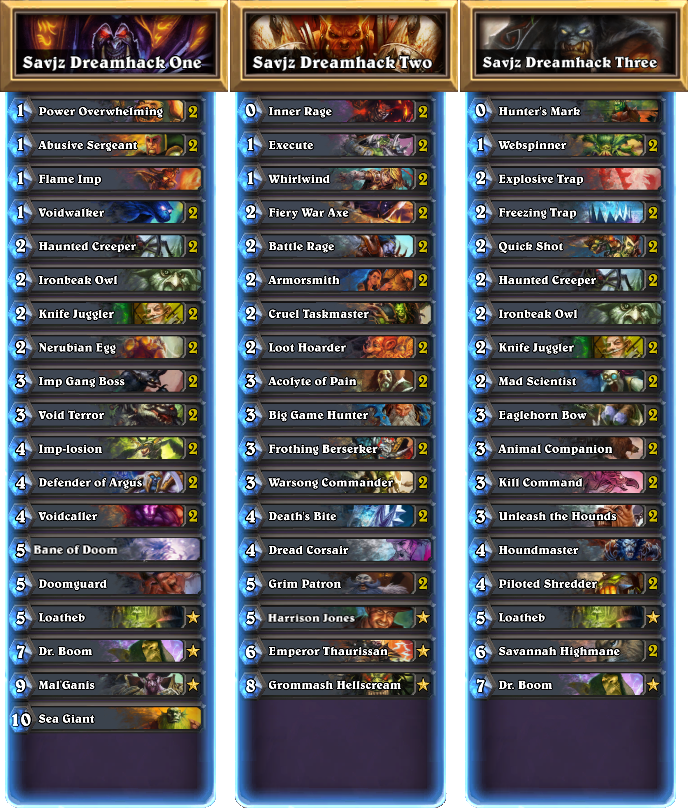 The first pick Demonzoo. This is a deck that has always brought me lots of success. I'm not sure if it is as good as Handlock -- especially not as good against Patron -- but it was a comfort pick. My Handlock gameplay hasn't been that great lately and this is a deck I know much better. The only new card in the list is the Loatheb which I added to replace Sylvanas. I used to play Loatheb only when Freeze Mage was a big threat but I've found him useful against other combo decks as well. Loatheb also ends up helping against Hunter when keeping them off Kill Command can buy you that last turn you need to push lethal.

My second pick was a fairly standard Patron Warrior. Patron is simply the best deck right now so I added in Harrison to help against specifically against other Patron Warriors. I am confident enough in matchups -- like Druid -- that take a small hit for playing Harrison that the risk is justified. Big Game Hunter also gives Patron a chance against Handlock so it seemed like a really solid addition. Against decks with no BGH targets you can still Inner Rage or Cruel Taskmaster to be able to hunt down a five attack minion.

The third deck I just copied from JAB. My only change was replacing a Houndmaster for a Piloted Shredder. The Shredder just felt more consistent and less situational. Dropping Shredder always feels great whereas with two Houndmasters you sometimes get denied a good use for the Battlecry. Hunter is another class that many people have had much success with since the class is simply very strong in constructed due to the Hero Power. I struggled while picking a Hunter list but I ended up choosing a slower version to compliment the lineup. With the Demonzoo, the addition of a Face Hunter would have weakened my lineup and made me softer to all anti-aggro lineups. For a format like Conquest the Midrange Hunter felt like a better choice since it can build a board and not always go face.

The gameplan with this lineup is to play mana efficient minions and establish a strong board before too many big legendaries hit the table. This lineup should work out against decks such as Tempo Mage, Druid, Control Warrior, and hold its own against Patron. Rogue is a potential weakness because of the Demonzoo deck but I don't expect to see that many Rogues considering the meta. Handlock is another slightly painful matchup but all of my decks have game there since Patron has a BGH and Warlock/Hunter can always beat them down with a good draw.

Back to the Present

While I was happy with my deck choices I dropped two series and did not make top eight. In one match I got countered by Maverick and went 0-3 with Hunter. I don't feel like I made any mistakes but his lineup was very good against mine. In the match I lost against Forsen I think I could've won with Patron if I had had a bit more time to practice with it. Forsen did, however, have a good lineup that was prepared for Patron decks.

The one change I almost made after writing my deck analysis was a swap of Demonzoo for Malylock. I ended up sticking with Demons and it was very good to me throughout the entire tournament. I had it matched up against mild counters but I had good draws so those went okay still. In my first loss Hunter was the weak point and Patron struggled in the second so the Demonzoo deck pulled its weight. Demonzoo worked out fine as it is a bit out of the meta so my opponents didn't build their lineups to be particularly good against it.

Looking back, the only change I might consider would have been to be a little more unpredictable with my decks. I also, of course, could have practiced a little bit more -- especially with Patron -- since I feel like I play Patrons well but it was just a little rusty.

All in all Dreamhack Summer was a really awesome tournament and I was happy to be there even though I ended up getting knocked out early. The tournament was very rough though and a lot of players who I know practiced like crazy still got crushed. This tournament may well have been the toughest one to date.
Please log in with your teamliquid.net account to post a comment.
League of Legends   Building to New Heights: Steve's State of NA "If we can really leverage the infrastructure that a handful of teams in the LCS have built, then I think we’ve got a real shot at a World championship."
League of Legends   Kold Puts the Pieces Together "Coaching is about making sure that the players get the credit they deserve."
League of Legends   Cain: The Man Behind the Super Teams If you’re a Team Liquid fan, Cain’s departure should stir something in you. It should make you feel. Nervous. Sad. Curious. Nostalgic. Excited. Strange. Awed.
StarCraft 2   Climbing the Mountain: Introducing Liquid Kelazhur Humble, kind, brilliant, and one of the best Terran's on the planet — we're proud to announce that Diego "Kelazhur" Schwimer is the newest member of Team Liquid's StarCraft 2 team.