This weekend Team Liquid’s Heroes of the Storm team defended their Dreamhack title in the Turtle Beach Dreamhack Allstars tournament in Jönköping, Sweden. The $10,000 Event was the epicenter for some of the best Heroes games we’ve seen to date out of the squad.

The team met Fnatic in the first round who won through the BYOC qualifier to attend the event. After winning the first game, the team dropped their only map of the tournament before closing out the series 2-1.

The next round Liquid faced the Dreamhack PGL Spring Champions runners up, Gamers2. Liquid defeated their opponents with a swift 2-0 victory.

After coming back from the losers bracket, the grand finals pitted Liquid against Gamers2 yet again. Liquid began the series with a 1 map advantage, and won the first map played on Dragon Shire decisively, forcing a fight with the Dragon Knight on the enemies core with a two level lead.

Game three saw Blackscorp on Zeratul, a deadly hero in the current meta. The team played from behind, losing a keep early and a few fights. However at level 16 Liquid contested a tribute and stabilized with a five man wipe, killing everyone on Gamers2. The following tribute at level 19 was deja vu, as Liquid aced G2 yet again and pushed down the core for the win.

Liquid and Gamers2 will face off again at upcoming DreamHack Valencia. Congratulations to the team on winning their second Dreamhack! 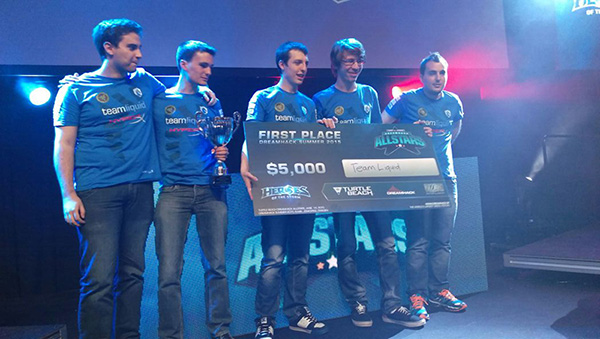 Writer // Dylan Walker
Please log in with your teamliquid.net account to post a comment.
League of Legends   Building to New Heights: Steve's State of NA "If we can really leverage the infrastructure that a handful of teams in the LCS have built, then I think we’ve got a real shot at a World championship."
League of Legends   Kold Puts the Pieces Together "Coaching is about making sure that the players get the credit they deserve."
League of Legends   Cain: The Man Behind the Super Teams If you’re a Team Liquid fan, Cain’s departure should stir something in you. It should make you feel. Nervous. Sad. Curious. Nostalgic. Excited. Strange. Awed.
StarCraft 2   Climbing the Mountain: Introducing Liquid Kelazhur Humble, kind, brilliant, and one of the best Terran's on the planet — we're proud to announce that Diego "Kelazhur" Schwimer is the newest member of Team Liquid's StarCraft 2 team.