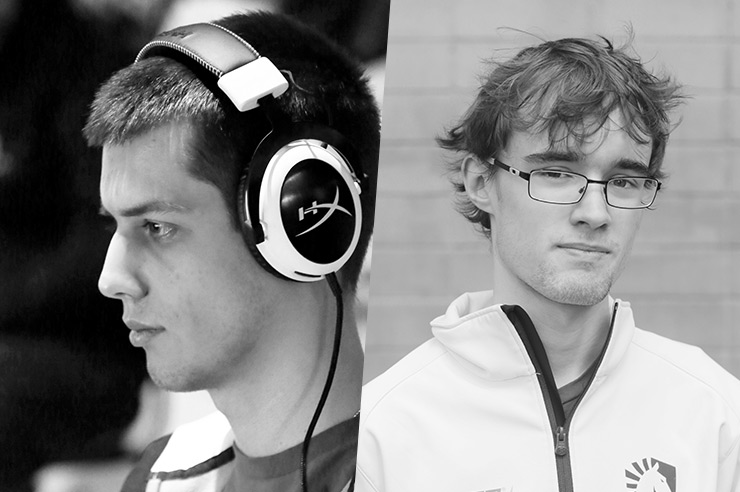 Things went just about as well as you could really expect for Liquid in the first two groups of WCS Premier. First, Snute obliterated the competition and advanced from his group by a 4-0 score. Then TLO rebounded from a shock early loss by defeating iG.Jim and the plucky TA.Kelazhur and secure his own advancement.

But if the first two groups were difficult, Liquid faces an even tougher assignment as a team with Group C. Now the goal isn't just to see one of the players advance... it's to see two of them make it through.

Yep, the tradition of Liquid teamkills continues in the Premier Ro32. Bunny and MaNa were placed into the same group, and will try to engineer a situation in which both come through. A couple of points are in their favor. First, they won't face each other in the opening matches, which makes the chances a bit higher. Second, the group doesn't have a clear favorite, which leaves the floor wide open. With a bit of luck and the usual amount of skill, it just might be possible to make it a Liquid 4/4.

The opening match will pit Bunny vs the always unknowable MajOr. While the Mexican terran hasn't been active in major tournaments recently, he's been absolutely tearing through smaller ones. In 2015, he has a series record of 16-2 and a match record of 34-9. His only losses have come against protosses Arthur and MǂLilbow. That's great news for MaNa—if they play—but not great for Bunny. MajOr has long been a strong TvT player and Bunny will have to come out sharp in the opening match.

In the second engagement, MaNa will collide with viOlet. There's no doubt that the Korean zerg is a big name, but he isn't the dominant force that he used to be and MaNa has a fair chance at this. The problem is the match-up. PvZ is not the match-up he relishes playing (thanks FireCake) and viOlet is a statistically better player vs the forces of Aiur. It's unfortunate, I'm sure if given the chance, both MaNa and Bunny would happily trade opening opponents. It's absolutely critical that at least one of them wins their opener, otherwise they'll be forced to play each other in the losers match.

Aligulac's model predicts some surprising results for this match. In particular, it rates Bunny a slight favorite to advance, but the median outcome predicts viOlet moving on instead. That tells us that these players are all ranked very tightly, and it also speaks to a fair bit of uncertainty, particularly about Bunny's performance. Last year, the Danish terran was lights out vs foreign opposition. Now that he's gone back to splitting time with his studies, can he maintain that edge?

Meanwhile, for MaNa, it's about match-ups. The opening PvZ is a hurdle, but it was always likely that he'd have to beat viOlet to advance from this group anyway. You cannot move beyond this round without confronting your fears, and that will apply for our Polish protoss. Just as Snute faced down sickness and TLO avenged himself vs Kelazhur, so too must MaNa confront the terrifying spectre of the swarm hosts.

Here is the median outcome:

Once Group C is over, the Liquid`Sc2 squad will be able to sit back, relax, and watch some the action from the comfort of their desktop. But the final hurdle of this round still lies ahead. So far, it's been a great run for the team in Premier, and of course, Ret may well be here too if it weren't for typical Liquid-brand bracket misfortune. There's a lot to look forward too, but at least in this third match-day, also the looming chance for disappointment. Bunny and MaNa are confronted with two strong players... and each other. They will have the home field advantage in the European group, but the rest is up to them. Can they pull off the double escape? Watch and find out!