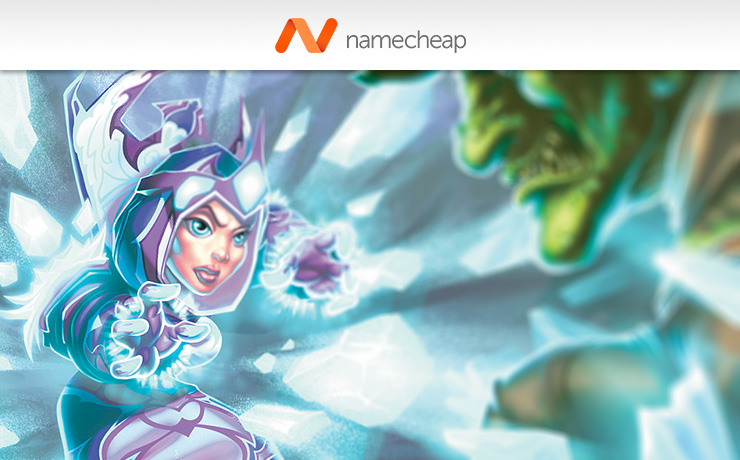 Buckle up because we're going long. As the title of this deck suggests, the goal here is to draw the game out as long as possible and win by fatiguing our opponent out. If you are the type of player that enjoys going to the late game and winning only once every threat from your opponent has been answered than this is the deck for you.

One of the first questions that comes up when approaching this deck is "how do we ensure they fatigue first"? Two Mage cards from the expansion sets are the first part of this answer. Duplicate and Echo of Medivh enable us to fatigue the opponent because they provide card advantage without drawing from our deck. This enables us to stay ahead in resources and behind in cards drawn. Secondly, Deathlord does his part as well. His downside is the opposite of our card advantage spells because he actively pulls out of your opponent's deck. 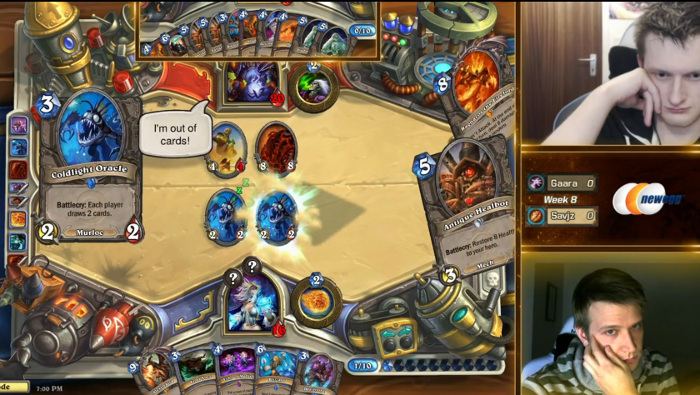 Anatomy of a Control Deck

I consider Fatigue Mage to be one of the purest forms of a control deck. I believe this to be true because the classical definition of a control deck is a deck which aims to answer threats and end the game once your opponent has no cards in hand.

The practical problem which most other control decks run into, however, is the need to end the game. Running a Ragnaros -- or equivalent threat -- is a necessary evil for control decks so that they can eventually win the game. The problem with having to run win conditions in your control deck is that they are dead in your hand for the parts of the game when you are under pressure. Fatigue Mage has elegantly sidestepped this issue. By winning through fatigue, the need to run a win condition is removed and we can have every card in our deck help with getting the game under control.

Since our overall goal as a control deck is to win when our opponent has no cards in hand, we must be trading efficiently and scoring 2-for-1s or better multiple times throughout the game. This is where one of a control player's most important skills must come into play: patience.

Fatigue Mage cannot afford to kill every minion on sight; rather, we must wait and hope to sweep away multiple minions in one go. This is where patience comes in. Knowing that we have many healing effects and Taunts in our deck, you should be comfortable taking an extra hit if it enables a bigger Flamestrike the following turn. While you must account for Health buffers like Defender of Argus, letting your opponent make the mistake of playing extra minions into a board clear spell can win you games.

That said, sometimes rules need to be broken. Undertaker and Knife Juggler are two threats which can snowball too quickly and demand an answer. Letting one of them stick around when you have an answer in hand is likely on the too greedy side of acceptable.

This is a complicated deck to play and play correctly. Most of the time you will have many spells in your hand, and since our goal is to go late, you will have enough mana to play a few of them. What you will need to understand, therefore, is how to find the play for a given turn.

One of the important elements of the deck is saving your sweepers. Frost Nova, despite not doing any damage, is one such important sweeper. In the later turns of the game, the two turn play of minions and Frost Nova into a Flamestrike can put you in a great position. Not many decks will be able to come back from Deathlord/Frost Nova if their board is being cleared the following turn. Even Frost Nova/Secret into Flamestrike can be a game winning play against most aggro decks.

Holding on to your Frost Nova can also help out against Loatheb and friends late. Your game can end in a hurry if you get locked out by Loatheb and a supporting board. If you suspect that your opponent may be running this five drop then be sure to hold back the Frost Nova.

Forcing good Duplicates is another important step to victory. For the most part, you want to be duplicating your Taunt minions since they provide the greatest defense. In order to set up such a play there are two things to keep in mind: Duplicate will only trigger on your opponents' turn so trade non-Taunt minion proactively; don't play out other minions if you suspect your opponent can remove them before your Taunt minion.

Sheep shenanigans are another important aspect of this deck. One easy way to clear Dr. Boom -- and other six to eight Health minions -- are to play out an Explosive Sheep or two before casting Flamestrike on Dr. Boom and his Boom Bots. If either Deathrattle hits either of your sheep then you've effectively scored yourself a second Flamestrike. Sheeps can also help clear the board if your opponent has a Knife Juggler and a Haunted Creeper. If you can kill the Creeper then the Juggler procs have a decent chance of hitting your sheep and cleaning up the rest. Finally, the sequence of Sheep-Echo of Medivh-Sheep-Ping can net you an extra Flamestrike for ten mana if you are in a pinch.

Double-Combo Druid, Rogue, and Handlock are all poor matchups for Fatigue Mage. Double-Combo Druid as a deck is very hard for us to deal with since our whole plan is allowing a board to develop before sweeping it all aside. Druid is usually too fast for us to keep up with since Savage Roar allows them to threaten lethal from a very low base. Rogue decks -- while not super popular at the moment -- are also unfavorable. The issue we run into here is that their damage can be very spell based and bursty. We cannot just ignore the board against them but the threat of huge Blade Flurries are too much for us to handle usually. Last comes Handlock, this matchup can be very bad but only if our opponent knows how to play it. We don't stand a chance against infinite Infernals so a turn nine Jaraxxus is usually game. If they hold it until later, however, we're in good shape.

Mech Mage is a middle of the road matchup. Mech Mage's main plan of flooding the board with mechs plays very poorly against all our sweepers. That said, Antonidas and spare parts can be very hard for us to deal. Most of the other matchups are easy to break down but this one sits right in the middle.

One of the best parts about playing this deck is that many of the popular decks are favorable matchups. No-Combo Ramp Druid, Warrior, and Hunter all fall into this category. Ramp Druid and Warrior, for the most part, are too slow to threaten us. By the time that they can establish a threat we should be set up with Taunts and Duplicates. That said, Deathlord can prove to be a liability in this matchup so be careful with him if you don't have a Polymorph in hand: Sludge Belcher should be your Duplicate of choice. Hunter is a good matchup for the opposite reason. They are normally so all in that Healbot help immensely and Deathlord will rarely find a minion of value: feel free to Duplicate your Healbots here.

Priest, Paladin, and Zoo are all very favorable matchups. The thing these decks have in common is that they are slower than Hunter and rely on value minions. We are perfectly positioned to prey on these decks because they are required to play out multiple minions to assemble a clock. When they do, Flamestrikes can clean them up profitably. Assuming even they can get past a wall of Deathlords. 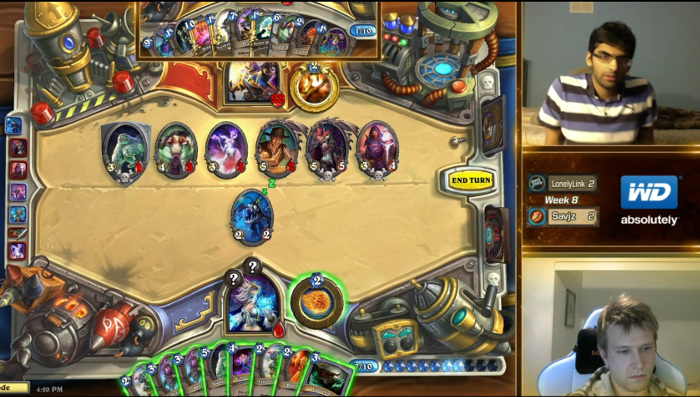 Coldlight Oracle draws Frost Nova/Doomsayer, not much Priest can do against that

Against these decks, we're looking to stay alive until our Flamestrikes and Duplicated Taunts can take over. We are, therefore, looking to keep Explosive Sheep, Frostbolt, Doomsayer, Deathlord, and Duplicate if we already have a Deathlord. The Sheep and Doom are rather self explanatory and Frostbolt is to snipe big early threats such as Mech Warpers and Knife Jugglers before they can get out of hand.

The plan here is to outlast and out-value them with Duplicate and Echo of Medivh. As such, Duplicate, Deathlord, and Sludge Belcher are the cards to keep. Deathlord is the only questionable inclusion among those since against Warriors he can be Executed. We won't be under very much pressure from control decks so take your time to set up a powerful Duplicate. Coldlight Oracle is a card to look at keeping against Handlock and should be played early if you can force a discard.