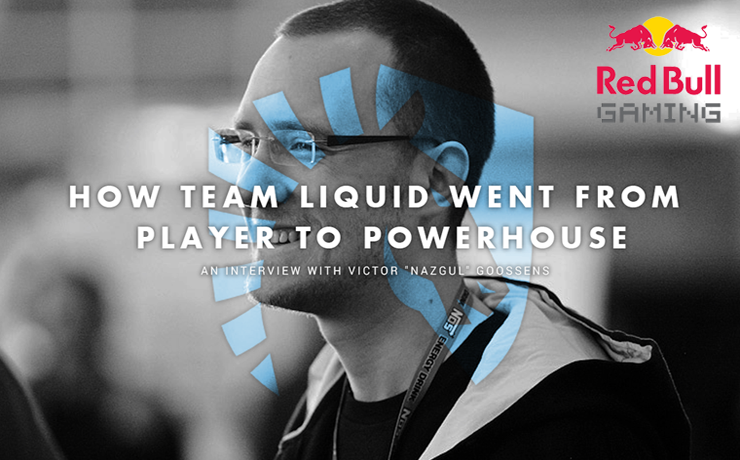 Founder and Co-owner of Team Liquid, Victor Goossens a.k.a. Liquid`Nazgul, has talked to Rob Zacny from Red Bull esports.

Goossens was a kid when he started Team Liquid. It was never meant to be a major eSports organization at all. Team Liquid was a place for passionate Brood War fans and players to hang out and follow the fascinating, unique pro landscape in Korea.

"I started Team Liquid when I was 15 or something, just as a clan on [Battle.net]," Goossens recalls. "Then, one or two years later, we started the site. Then I basically ran Team Liquid as a hobby, with a huge voluntary staff. There was no business motive there. I was really a poker player!"

To Goossens' way of thinking, StarCraft 2 itself was the first major change to hit Team Liquid, and the first step on a journey that's taken the organization into almost every corner of competitive gaming.

Interviewer: Rob Zacny
Graphics: Red Bull
Please log in with your teamliquid.net account to post a comment.
League of Legends   Locked and Loaded: Team Liquid enters Free Fire We are excited to announce that we are taking our first steps into a new esport — we’re entering the world of Garena Free Fire.
League of Legends   Raise Your Subs to Another Three Years We couldn’t get enough subs during our championship-filled 2019 season. In fact, we want even more turkey and provolone as we speak, during this announcement. So it only makes sense to extend our partnership with North America’s favorite sandwich shop, Jersey Mike’s Subs, through 2023. That’s three more years of subs - and content, of course.
Fortnite   Meet the Maestro: Mitr0 joins Team Liquid Many of you will know him for his dominant online performances across 2019, and stellar duos showing at the Fortnite World Cup. We’re pleased to announce that Mitr0 has officially joined Team Liquid!
Welcome Kaymind to Team Liquid: Press F To Boost We are thrilled to announce that Kaymind will be joining our PUBG team! He is one of the most talented PUBG players in the world and has proven that time and time again. We can't wait to see him play under the TL banner.