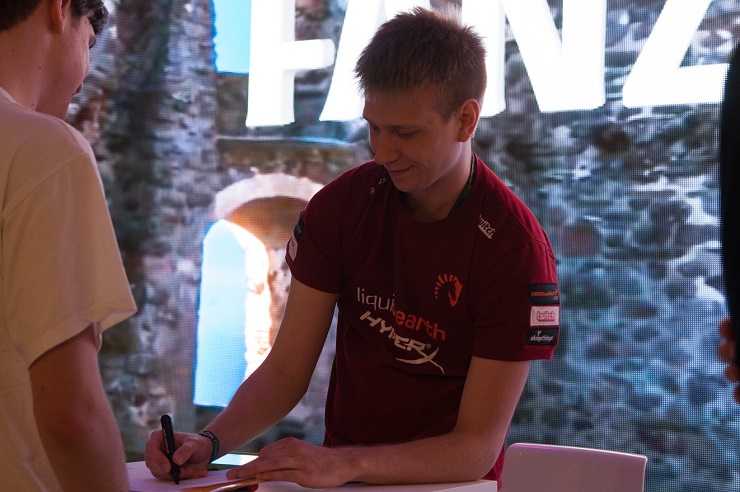 In the eighth and final week of the ESL Legendary Series proper, Savjz defeated Lonelylink, Gaara, and Kitkatz to qualify for the

ESL Legendary Series Grand finals in Burbank California next month. For the run, Savjz brought three of his most trusted decks, a Fatigue Mage that's he's quite known for, a Druid inspired by complexity's Dog, and a control heavy Paladin first introduced on reddit by relatively unknown player, Hotform. The MVPs of the night were his Druid, which went undefeated, and his Paladin which cleaned up the last two matches of night.

The entire night started off extremely tense as Savjz started off 0-2 against newcomer LonelyLink, one game away from exiting the tournament in the first match. Savjz came back, however, with great mindgames and counterpicks in the last two matches, running his more control-ly Paladin into LonelyLink's smaller Paladin and getting his Fatigue Mage matched up against a Priest. 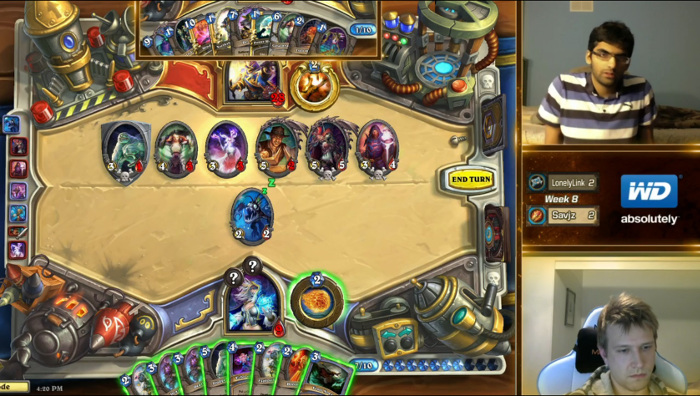 Doomsayer and Frost Nova off of the Coldlight Oracle. Seems like pretty good topdecks?

Next came Gaara, who had just 3-0'd Amaz in the previous round. However, because Amaz used three aggro decks, Gaara was up for a completely different challenge against Savjz's three very control-ly decks. The first game was won very easily for Savjz as he faced his Fatigue Mage against a Handlock that didn't run Jaraxxus, THE key card in the matchup. In the second game of the series, however, Gaara took a very firm lead, both in board control and card advantage. But because of a combination of a brilliant play from Savjz and Gaara's call to play around Mind Control Tech, Savjz was able to outpace his opponent and kill him before Gaara's card advantage took hold. 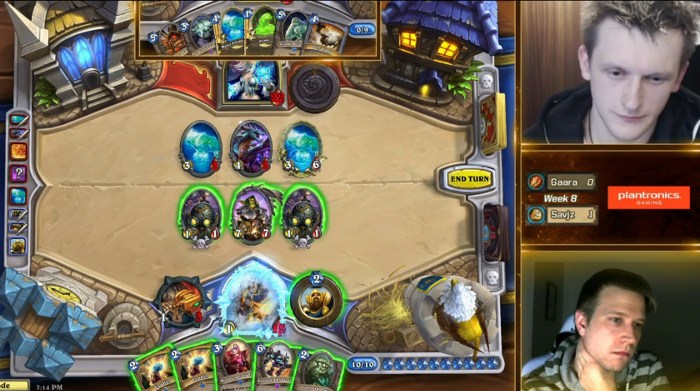 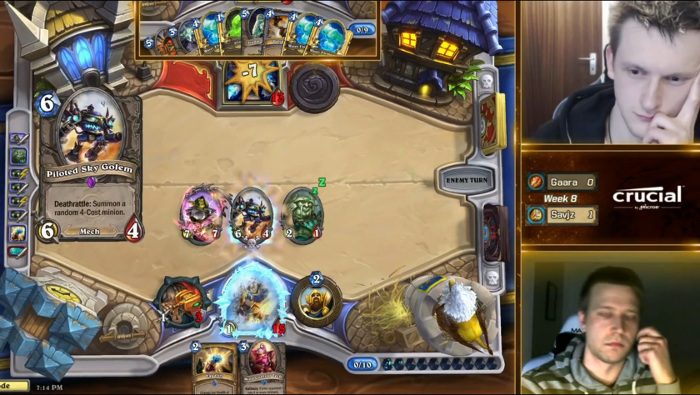 Equality, trade into minions with bombs + a bit of luck, silence your own Dr. Boom, play Piloted Sky Golem = Extremely Threatening Board

The final boss came in the form of yet another Tempo Storm player, eager to take revenge for his fallen teammate. The first match was a slow slugfest between Savjz's Control Paladin and Kitkatz's unique Control Warrior featuring Sneed's Old Shredder and Kel'thuzad. The match eventually came down to Kitkatz's Kel'thuzad getting more value than Savjz's and having it snowball the game. Games two and three were throwaways as Savjz completely outdrew Kitkatz in game two and Savjz rolled into an extremely unfavorable matchup for game three.

Down 1-2, Savjz turned to his most trusted Paladin deck to sweep the remainder of the series. By this time, it was 7AM in Finland and fatigue was starting to set in. However, Savjz was able to buckle down and concentrate to be able to make the difficult decisions needed to win both of the Paladin vs Druid matches. Down to the wire in both games, Savjz made the decision to go for aggro and ignore a potential Force of Nature/Savage Roar combo. In both games, Kitkatz didn't have the necessary cards needed to close out the game for him and with that, Savjz is the big winner for the night! 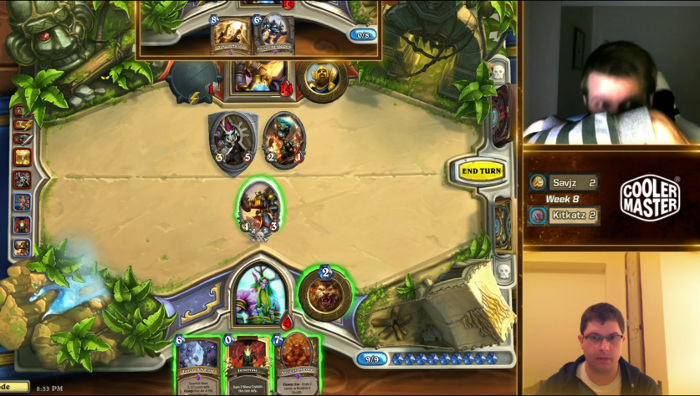 You can watch Savjz's entire run here on Twitch or play with Savjz's tournament-winning decks down below. 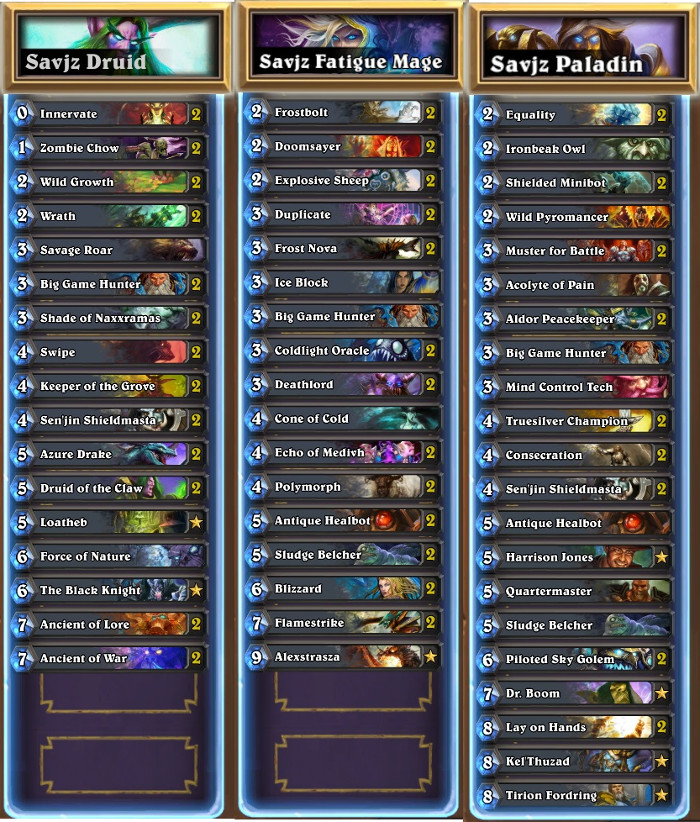 Writer: monk
Photo Credits: RICHARD STANWAY
Please log in with your teamliquid.net account to post a comment.
League of Legends   POTM: Tactical | Set the Mind to Automatic “[Worlds] forced me to realize how much of an importance it is to focus on the small details - like small mechanics of laning,” Tactical says.
AW X TL: The Legacy Duo Start Their Second Act For nearly 10 years, Team Liquid and Alienware have partnered to stretch the limits of competitive gaming.
League of Legends   Santorin’s True Calling Despite the Struggle "I’m super competitive by nature. Whether I win or lose, I just love competing. That’s why even though I went through so many hard times where I wouldn’t win for years, I still loved competing."
League of Legends   Professional Carry: Yeon Gets It Done " If the fight requires me killing someone for my flash or the fight requires me to stay alive the entire fight, I’ll just do whatever it takes to win that fight."