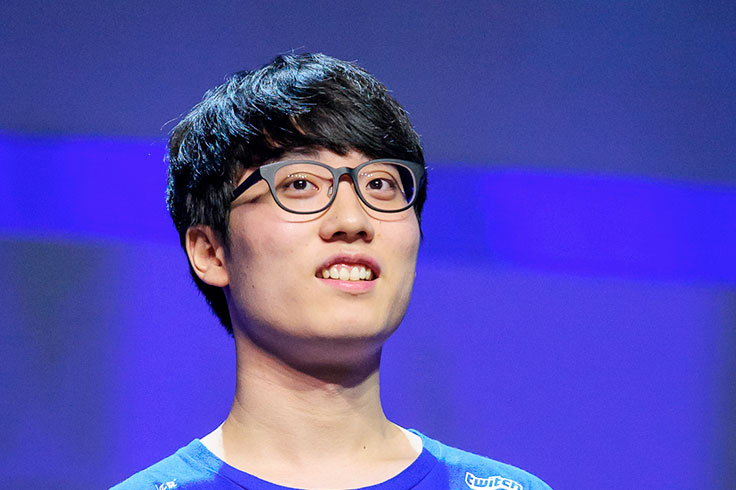 Looking back at Taeja's performance at Blizzcon 2014, the biggest tournament in the world of StarCraft II, most remember his amazing run to the semifinals. Not only did he take down soO in the first round, the only player challenging Zest for the imaginary title of "Best Player in the World", he also did so convincingly. Another tournament favorite, the reigning GSL champion INnoVation, followed his team-mate soO down in the Ro8 as Taeja demonstrated his killer TvT. Taeja was one map away from making it to the Grand Finals, where he would have definitely been favored over MMA. Despite being eliminated by the eventual champion Life, nobody looked back on Taeja's performance and called it disappointing. Nobody but Taeja himself.

"He is up there among the most successful and best players to ever touch the game, even without ever winning a GSL or a WCS season."
That mindset is one of a champion. One of a competitor whose only goal in a tournament is to win, win everything, dominate everything. To be the very best at what he does. Third/fourth place in the biggest tournament of the year is not good enough for someone like Taeja. With eleven Premier Tournament championships under his belt (a record achievement in SC2), anything but another win is a disappointment. Although he does admit that getting to the semifinals "wasn't all that bad", he certainly had higher hopes and expectations of himself.

As it stands, a WCS trophy is the only one still eluding Taeja. Everything else he has won. He is up there among the most successful and best players to ever touch the game, even without ever winning a GSL or a WCS season. You'll be hard pressed to find another player who has been as consistently amazing as Taeja has been over the past few years. Going into 2015, he can take it easy. All that's left for him is a Korean championship. The clock that says "military service" is on him now, but no pressure. Taeja has earned his place in history no matter what. But let's turn back that clock and look back at how he got where he is today.


Three years ago, Taeja was seventeen. He was on SlayerS, the team forged by Boxer, and he was considered a bright young talent. He first turned heads in 2011, all killing a very powerful ZeNEX line-up of Puzzle, Coca, Byun and Kyrix. Those, at the time, were very highly regarded players. A little later he followed it up with another all kill, this time of F.United - Soccer, Moon, Thorzain and Naniwa.

What really drew attention to him though was his consistent domination of ESV's Korean weekly online tournaments. Over the span of six months he won seven of them, while simultaneously making his first appearances in the GSL - beating well known players like Tails, sC and JYP. He eventually left SlayerS, perhaps as an indicator of the apocalypse that soon overcame Boxer's team. Suddenly he was in the same shoes a lot of Korean talents find themselves in. He wanted exposure, he wanted to compete wherever he could, he wanted to be given opportunities to show his skill and become a champion.

Unlike many others, Taeja's call was heard. It was heard by arguably the best possible team for him. And so... Liquid'Taeja.


It's been almost three years since that day. It's quite telling of his achievements that a team with as many well known, accomplished players as TeamLiquid was for a while jokingly referred to as "Team Taeja". Not only did he start competing (and winning) in foreign tournaments, he also established himself as arguably the best team-league player in SC2's history. His legendary IPL TAC performance (http://wiki.teamliquid.net/starcraft2/IPL_Team_Arena_Challenge/3/Statistics ) was only the starting point. It's no lie to say that he put the team on his back and played out of his mind to earn Liquid a place in the Grand Finals against the most stacked team in the world, Incredible Miracle. An all kill against Prime, four kills against StarTale, four kills against his old team SlayerS, an all kill of Incredible Miracle in the finals. Two more kills in the deciding Bo9. It took a GSL champion at the height of his career, Seed, to finally stop Taeja's rampage. He left the tournament with a 23-3 record against the Korean elite teams and their very best players.

While this was going on, he had won MLG Summer Arena, ASUS ROG Summer, and followed it up with his first Dreamhack title. A month after that he made it to the semifinals of GSL Code S, where it once again took the best player in the world at the height of his power, the eventual champion Life, to eliminate him. All in all, his reign over the summer of 2012 got stamped with its own name, one that's remember by all in the community: The Summer of Taeja.

Or, as some call it: the FIRST summer of Taeja. In 2013, Taeja made the Code S semifinals again, eliminated by... you know the story - the eventual champion Roro, at the height of his career, at the height of Broodlord/Infestor.

"All in all, his reign over the summer of 2012 got stamped with its own name, one that's remember by all in the community: The Summer of Taeja."
From June 2013 until the end of the year, Taeja won six Premier Tournaments. Three Dreamhacks, two Homestory Cups, one ASUS ROG. At the same time, he was Liquid's second best performing player in Acer's Teamstory Cup at 21-15. When previously the team relied on him to eek out the big results, he was no longer needed to do that. He still did though.

What's happened since then? Well, three more Premiers joined the others. Another HSC, another Dreamhack, a first IEM title. And, most recently, a third/fourth place at Blizzcon.

Players often choose to retire at the height of their career. But in Taeja's shoes, when exactly is that time? As often as he has talked about retiring in the past, due to various issues, you never felt like he'd actually reached his ceiling. He always seems to have more to give, no matter how much he's already achieved. His height never actually came. Maybe it's been here all along and it simply hasn't stopped since 2012. It's a remarkable feat of consistency and dominance to make people feel that way about him. So perhaps letting his time run out instead of calling it a day will be the most fitting end to his career in the end.

No matter when or how his career does eventually end, one thing is for certain: Taeja can look back on a prosperous and thoroughly successful career. He was always counted among the very best in the world and it always needed the very best in the world to prevent him from winning. TeamLiquid turned out to be exactly what he needed, and he turned into everything they were hoping for. A perfect partnership, the perfect fit.

For someone as talented as Taeja, what better team is there to offer him the opportunity to showcase all of it? He was able to compete all around the globe and that was all he needed to make his mark on StarCraft II's history.

For a team like Liquid, whose mission statement it's become to nourish and develop amazing talents, what player could have done it better than Taeja? A young kid struggling for achievements and glory, bursting with potential, who developed into a beloved world-beater with the team.

Even though this clock is now ticking away at Taeja's time left in competitive StarCraft, there is nothing left to prove. Everything else is simply a bonus for him and TeamLiquid, another medal to add to his stacked collection. Another one of his own records broken. Another page to the chapter that bears his name. And still, with his skill, ambition and mindset, I can't help but feel that he will be counted among the absolute best until the very end.

Writer: DarkLordOlli
Graphics & Format: shiroiusagi
Photo Credits: Kevin Chang, Richard Stanway
Please log in with your teamliquid.net account to post a comment.
Smash   Liquid Legends: The Counterpick Unlike the two spacies (Fox and Falco), Melee’s mainstay floaties were not created equal. Puff is solidly better than Peach in a lot of respects and wins the matchup pretty handily.
Smash   Hungrybox is Absurd The career of Juan “Hungrybox” Debiedma is absurd.
CS:GO   From 16-1 to 6-16: Love and Heartbreak in CS:GO In Counter Strike, if a team loses a map with less than 6 round wins, it’s a beatdown. It’s such a beatdown that we normally see it in an outclass scenario—a tier 1 team against some upstart. When it happens between two tier 1 teams, it’s often not an outclass and more a perfect storm.
League of Legends   Leading from the Isolated Lane In the average TL game, Alphari leads his lane opponent by 493 gold and 12.5 CS by 10 minutes. If you don’t know the numbers of League, this may not seem like much.