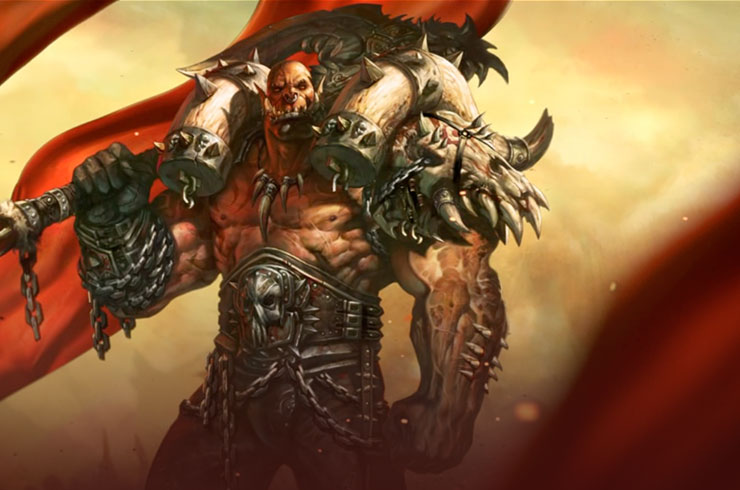 Why this Deck
How to Play
Mulligans
Good & Bad Matchups
VOD

Everybody knows about the Control Warrior deck. It is a slow and grindy affair which aims to end the game by drowning your opponent in Dust. The other Warrior deck, however, is a dark horse comprised of cheap cards that ends the game in a 20+ point life swing.

One Turn Kill -- or OTK -- Warrior is a deck I've been streaming with for awhile and with which I've had good success. While the decklist may not look like a top tier deck, it is deceptively consistent and has some very good matchups. So if you are looking for a strong deck that doesn't require a bunch of Legendaries, OTK could be the deck for you.

Finally, one of the important things to know about OTK is how it relates to Control Warrior in terms of playstyle; which is to say, it doesn't. OTK is a different deck than Control Warrior and has a unique playstyle. Despite playing much of the same early game removal, the late game is where these two split. Starting on turn seven Control Warrior can usually slow down and let their Legendaries take over; OTK on the other hand, has to start planning their combo and make an opening. 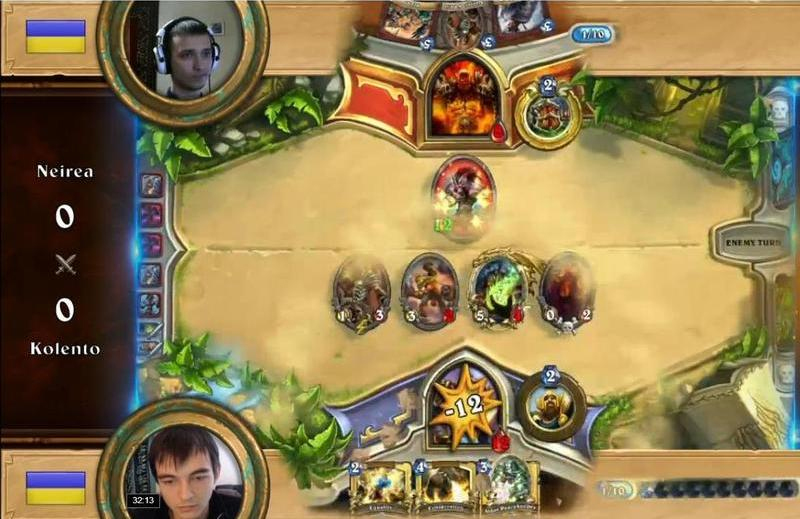 If this looks like fun, OTK is the deck for you.

The base level of the deck is knowing how to combo off. Raging Worgen and Charge are the two key pieces along with either Inner Rage or Cruel Taskmaster. From that base you can do sixteen damage for six/eight mana. Beyond the initial three card combo, every additional piece adds four damage or six in the case of Rampage. SO you have the damage, but now how do you get it through?

Ironbeak Owl is an all-star in this deck. Since this deck can out burst almost every other deck out there, removing Taunts is one of our main goals. In this regard, Ironbeak Owl functions as a two mana Assassinate. This ties into how we want to use the rest of our removal. Early game, Shield Slams, Execute, and Slam should be used for staying alive against aggressive decks. Once our combo is assembled, however, these cards become tools to help clear the way.

One of the most important skills to have when playing this deck is the ability to plan a turn ahead. This deck has been around long enough now that you likely won't be getting any more free wins by bursting out of nowhere. This means that you're going to have to leverage the fact that you know when the combo will hit and your opponent doesn't. The trick will be removing Taunts when they are unlikely to have another one or a way to kill on their turn.

The downside to playing a deck which requires a two turn set up is that it is open to your opponent stopping your combo. That said, in every game there is a moment where you need to just go for it and if you lose to a topdecked Defender of Argus that just comes with the territory. At the end of the day this deck is all about calculated risk: even if you push when you're 80% to win the 20% will come up occasionally. 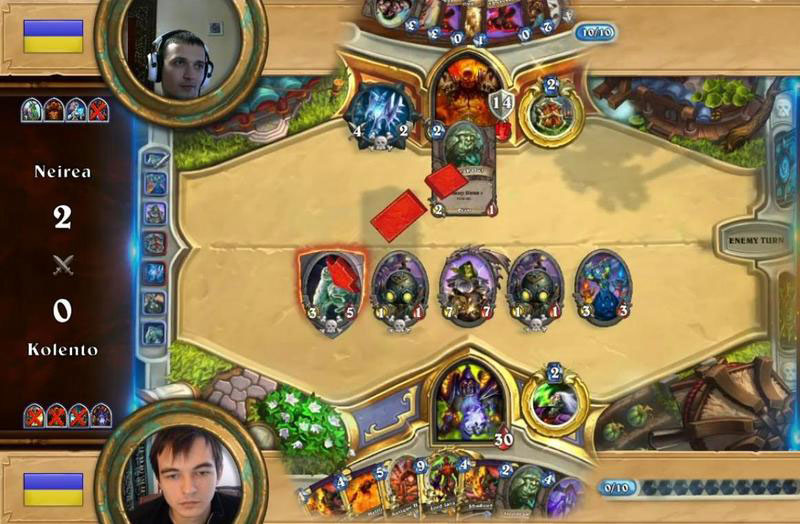 Since this is the turn we're going off, our Owl acts as a two mana Assassinate.

When it comes to mulliganning we are looking for cards to contest the board early and cycle through our deck. Loot Harders, Acolytes of Pain, and Death's bite are all keeps regardless of the matchup. Fiery war Axe is a good card but is much worse against Handlock and Druid: in those two cases it is safer to mull the Axe away.

In the more control/midrange matchups, we are looking for early removal to buy time against turn four to six threats: Mountain Giant, Azure Drakes, Druid of the Claw, etc. Execute is a good card to keep and Slam also goes up in value if we already have Execute. Shield Block and Shield Slam are also cards to look for. They should, however, be held back and played together. Finally there is Gnomish Inventor. In addition to cycling, the four Health is awkward for Warlocks and Druids to deal with. Gnomish Inventor should get in a couple points of damage or set an Execute.

Against Shaman and Zoo decks we are looking to stay alive long enough to combo off. Loot Hoarder shines along with Slam as both will usually score a 2-for-1. Similarily, Slam is strong in these matchups for its ability to snipe 3/2s or cycle and set up Whirlwinds. Despite being a five mana spell, Brawl is often a good card to keep in these matchups.

Hunter and Paladin decks are the last category of mulligans. These decks tend to go wide with a number of X/1s; therefore, Whirlwind is a card to keep early.

You may have noticed that in no matchup are we keeping combo pieces. That is because you have to consider them all as eight drops. We don't need our combo pieces in our opening hand and enough of our cards cycle that it won't be hard to find them.

We don't need our combo cards early so send them all away.

The best matchups for OTK Warrior are those decks which don't apply much pressure and give us time to set up. Control Priest and Miracle Rogue are two very favourable matchups for that reason. Neither of these decks are designed to counter minions via Taunts as they take a more proactive role with removal.

Handlock is another similarly good matchup. While Handlock can provide some early pressure starting on turn four, our removal should be able to take care of their initial threats. Beyond the giants, Handlock's removal suit and sweepers are effectively dead against us. When playing against Handlock, however, watch out for their Taunt givers when the setup turn comes: most lists currently run two Sunfury Protectors and a single Defender of Argus.

There are three matchups which are unfavourable for OTK. Control Warrior does not tend to go in our favour since they can Armor Up! well above 30 which puts too much pressure on our weak cantripping minions. In order to win against Warrior you will often need to combo off twice: don't use both Charges on one Worgen. Giant and Freeze Mages are equally bad because of Ice Block which is especially good against a minion with greater than ten Attack. The last unfavourable matchup is Druid. The minions in Combo Druid are too sticky for us to deal with and their combo is usually a bit faster than ours. Ramp Druid can be even worse given their abundance of Taunts. 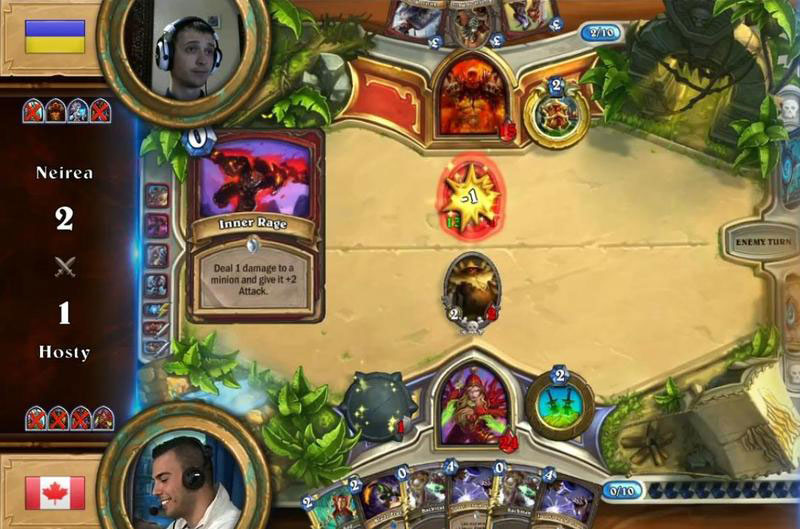 If left alone this deck can do some crazy stuff, so glhf!

Check out this VOD! 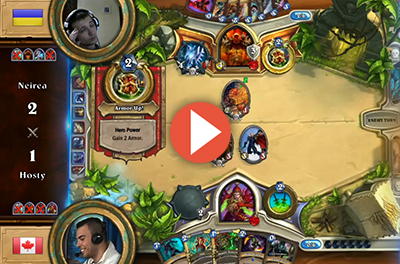 Writer: Liquid`Neirea
Graphics & Format: shiroiusagi
Art Credit: Blizzard
Please log in with your teamliquid.net account to post a comment.
League of Legends | Valorant   Rakin: Chasing that feeling Long ago, Rakin earned a series-winning pentakill in the CBLOL. He remembers the day well because he is still chasing the feeling from it. Read Rakin's story from League to Valorant to Variety. Leia em Português!
Valorant   Team Liquid VCT 2023 Roster: Get to Know the Squad The time is finally here. Team Liquid is proud to announce its starting VALORANT roster for VCT 2023. You may know have heard the leaks, but now it’s time to hear it from the horse’s mouth. More than that, it’s also time to learn the most important answers to the most important questions these players have EVER been asked.
CS:GO   Daps: Rio, YEKINDAR, and TL’s major improvements With the Rio Major rapidly approaching, veteran CS:GO writer Dafydd sits down with coach Daps to talk over how the team has improved so rapidly and how they've integrated YEKINDAR so well. Daps goes over NA team culture, open communication, YEKINDAR's unique versatility, and the teams he's looking forward to facing at the Rio Major.
The Liquid Review: October 2022 October brought more treats and less tricks to Team Liquid! This month saw a huge run for dota at The International, some big moments in Smash, and a return to the top 2 in CS:GO. Read about everything Liquid got up to in October in this month's Liquid Review!